Ex-Rider Interview: Top pro, WorldTour team DS and now race director with Flanders Classics… Scott Sunderland has done it all and got the T shirt. Ed Hood caught up with Scott to hear the long tale of his life in cycling. 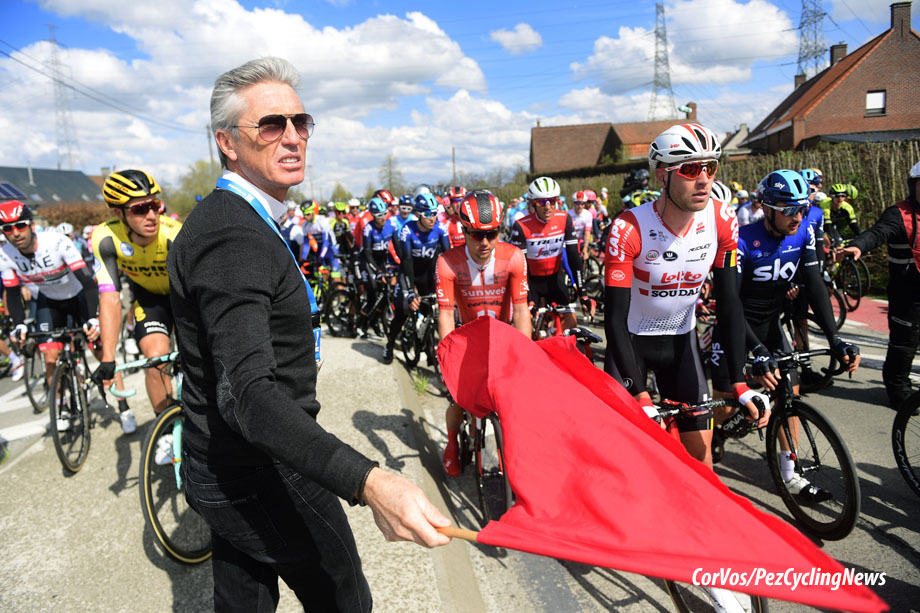 With the restart of the Covidelayed WorldTour season only weeks away and the first of the ‘Flanders Classics,’ The Druivenkoers Overijse scheduled for Saturday, August 29th we thought it would be a good time to catch up with the Flanders Classics Director to discuss the phenomena of running the ‘Spring Classics’ in the autumn – and the pathway that lead him to the job after a lifetime spent in cycling.

The man with one of the biggest jobs in Belgian Cycling doesn’t actually hail from the Flatlands, rather from the Antipodes. As a competitor in European races his career spanned from the 80’s through to the mid 2000’s – when he exchanged the saddle for the driver’s seat of a team car and from there into race organisation and direction. From Inverell, New South Wales, Mr. Scott Sunderland. 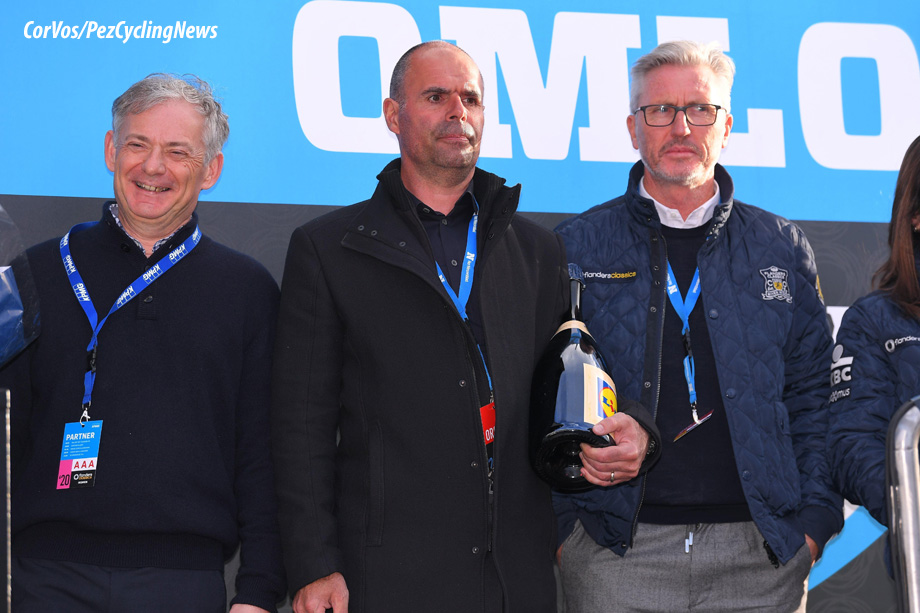 PEZ: Tell us about the job, Scott.
Scott Sunderland: Whilst each race has it’s own organisation I have over-arching responsibility for the look and feel of all the races. In light of the current situation we’re revising the parcours but still giving the fans and riders what they need – whilst we’re trimming a few kilometres off we’re retaining the DNA of the races. The riders are coming straight off the Tour into the Classics; were ‘softening’ the courses a little; they’ve had a long off season and they’ll be racing into November then starting again in January. Our consideration has to start with the riders and then the fans. We have the Strade Bianche and Milan-Sanremo coming up in early August, they’ll be good indicators of public reaction and how the races will go.

PEZ: This journey started for you back in 1987?
I was Australian Champion in ’86 then rode the Commonwealth Bank Classic, there was a Swiss team there, sponsored by Mavic, they saw me doing a lot of work for the team and that got me a ride in Switzerland where I rode semi-pro for three years. The team had connections with the boss of the Reynolds team, which is now Movistar and he was our pathway to rides in Spain where I enjoyed success, winning the Vuelta a Bidasoa twice. 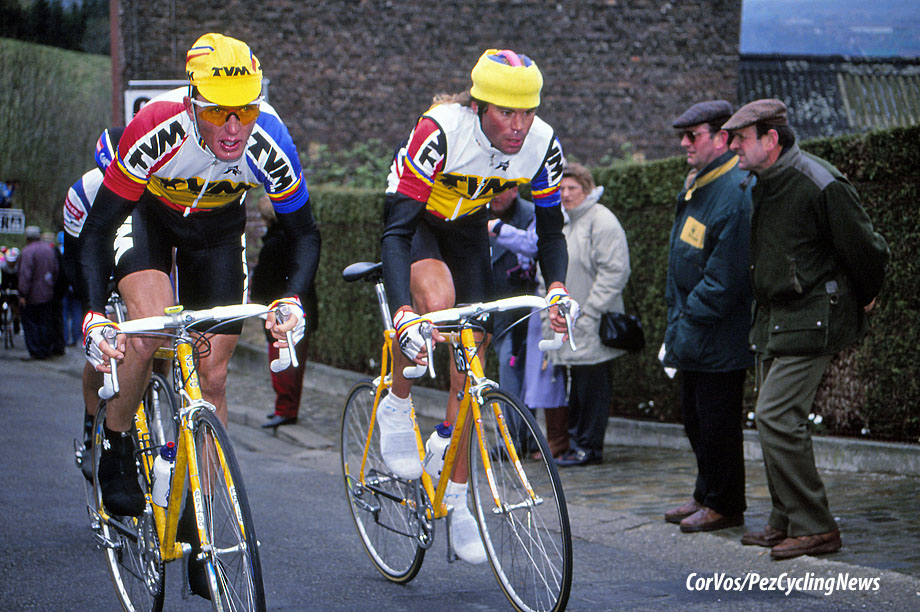 Flèche Wallone 1992 with TVM next to Gert Jan Theunisse

PEZ: But The Netherlands was where you went when you turned full pro?
That year, 1990 was the fork in the road for me and whilst I lived in Belgium, Reynolds were keen to sign me; I’d performed well in the Tour de l’Avenir and reasonably well in the ’89 Worlds at Chambery. But then TVM came along, a team with a cosmopolitan blend of riders; Danish, Norwegian and Swiss riders so the language would be English – which was appealing to me. If I’d gone to Reynolds I would have had to relocate to Pamplona and I didn’t speak Spanish. The French RMO team expressed interest too but I went with the TVM deal.

PEZ: Your first full pro win, the Trofeo Pantalica, 1991.
It was a beautiful win from good company with Giorgio Furlan second and Luc Leblanc third but I worked hard for it. I rode well in Tirreno too at the start of that year, top 10 overall. The first year with TVM I got beat up real bad, I was sent to the Giro, the weather was bad, my roommate got sick then so did I and I had to quit. Then they sent me to the Suisse Tour and I was just dead after it; you were just left to get on with it, no guidance and I finished that season traumatised. TVM was actually a step down from my Swiss Mavic team in terms of everything except salary. 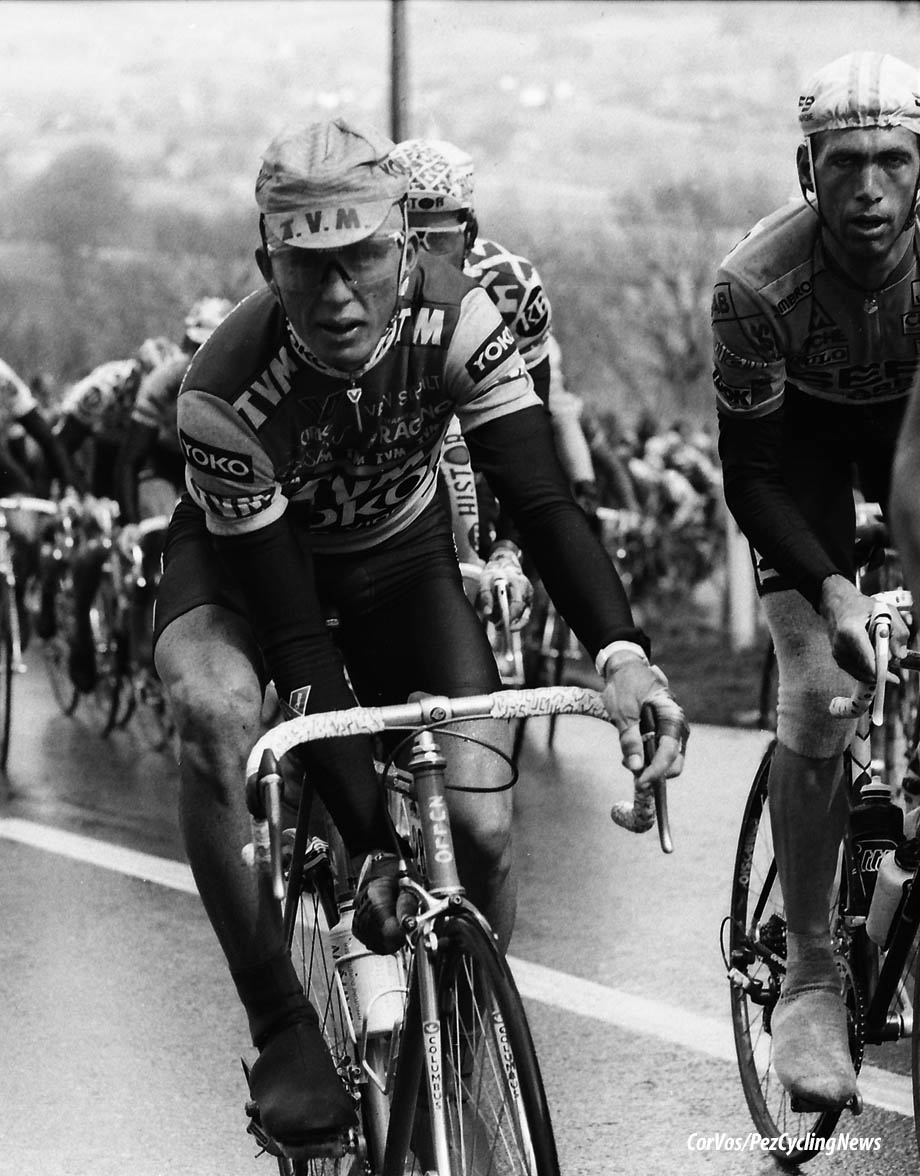 PEZ: But you finished your first pro Worlds in ’91.
I love the Worlds, it’s such an honour to ride it; people go on about the yellow jersey of Tour leadership but you only get to wear them for three weeks at most – you carry the rainbow jersey for a full year. 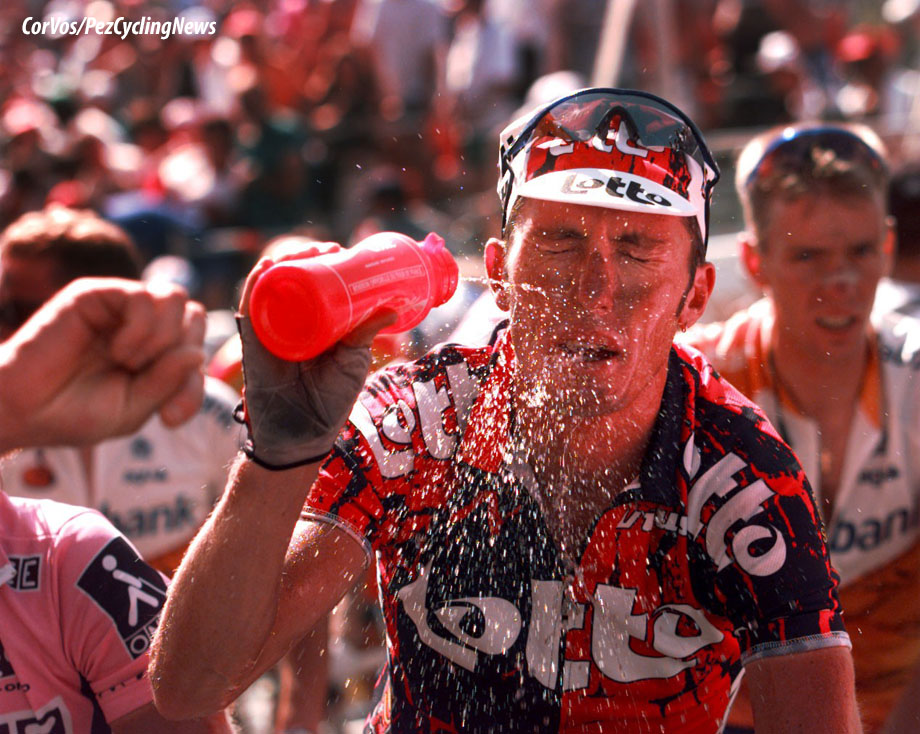 PEZ: Your first Grand Tour finish, the Vuelta in 1992.
There wasn’t a lot of support, no talks about what the plan was for the stage. When I think back, there was no guidance, there were a couple of guys like Robert Millar and Jesper Skibby who you could talk to but even an experienced professional like Robert found it difficult there. There was no sharing of knowledge – an ‘every man for himself’ mentality. 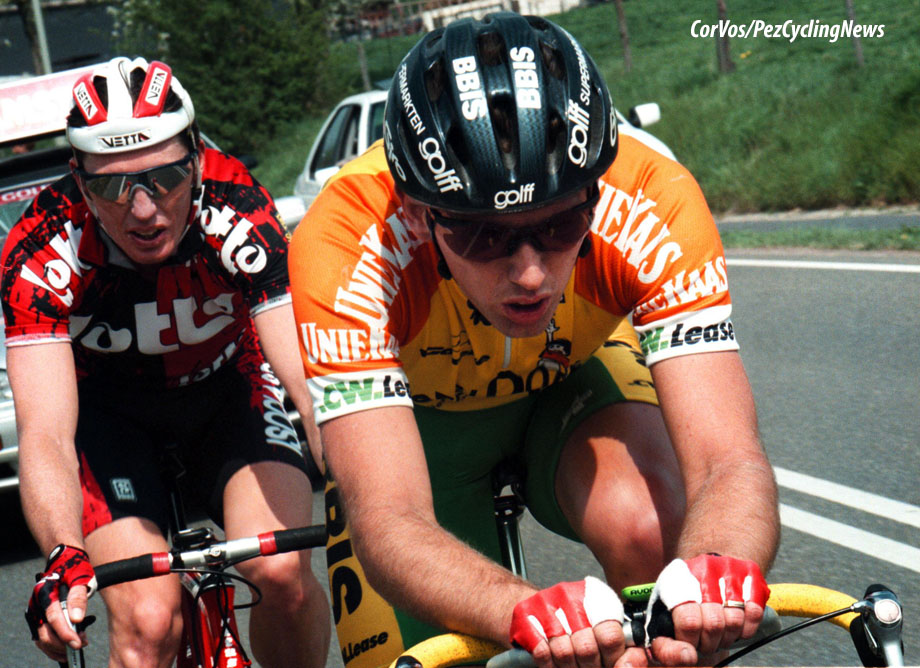 On the wheel of John van den Akker

PEZ: You went to Lotto, a Belgian team in ’95?
It was more of a step sideways than an improvement in terms of support but at least the material was better, we had Vitus bikes which were nice and we had Campagnolo rather than Shimano equipment. 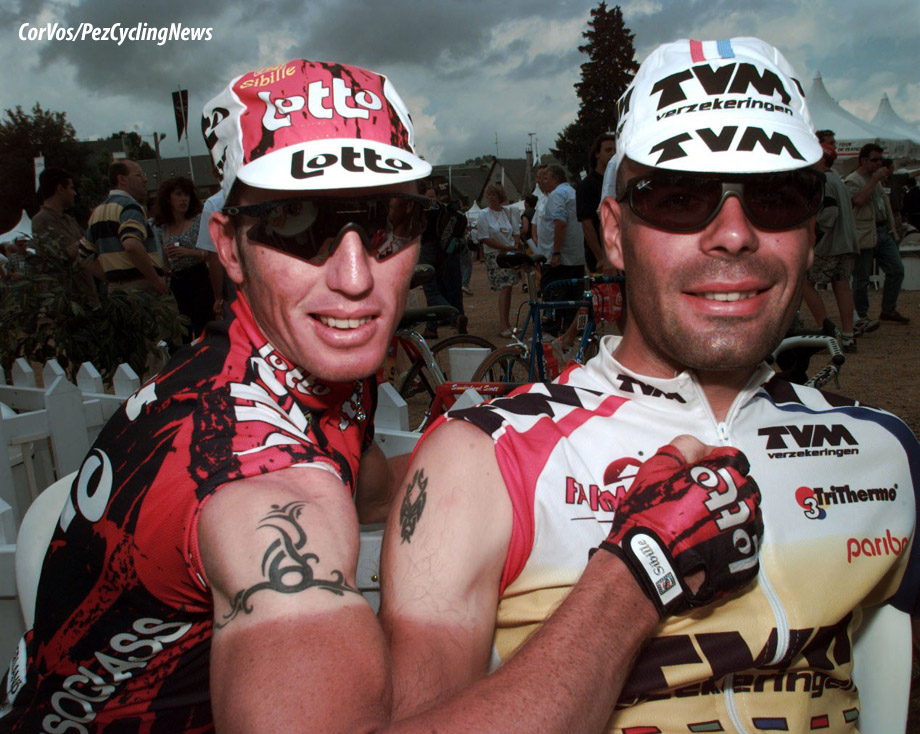 PEZ: Your first Tour de France, in ’96?
That was a difficult era, very hard, there wasn’t one day where I felt on top of it, more a case of getting dragged around France. 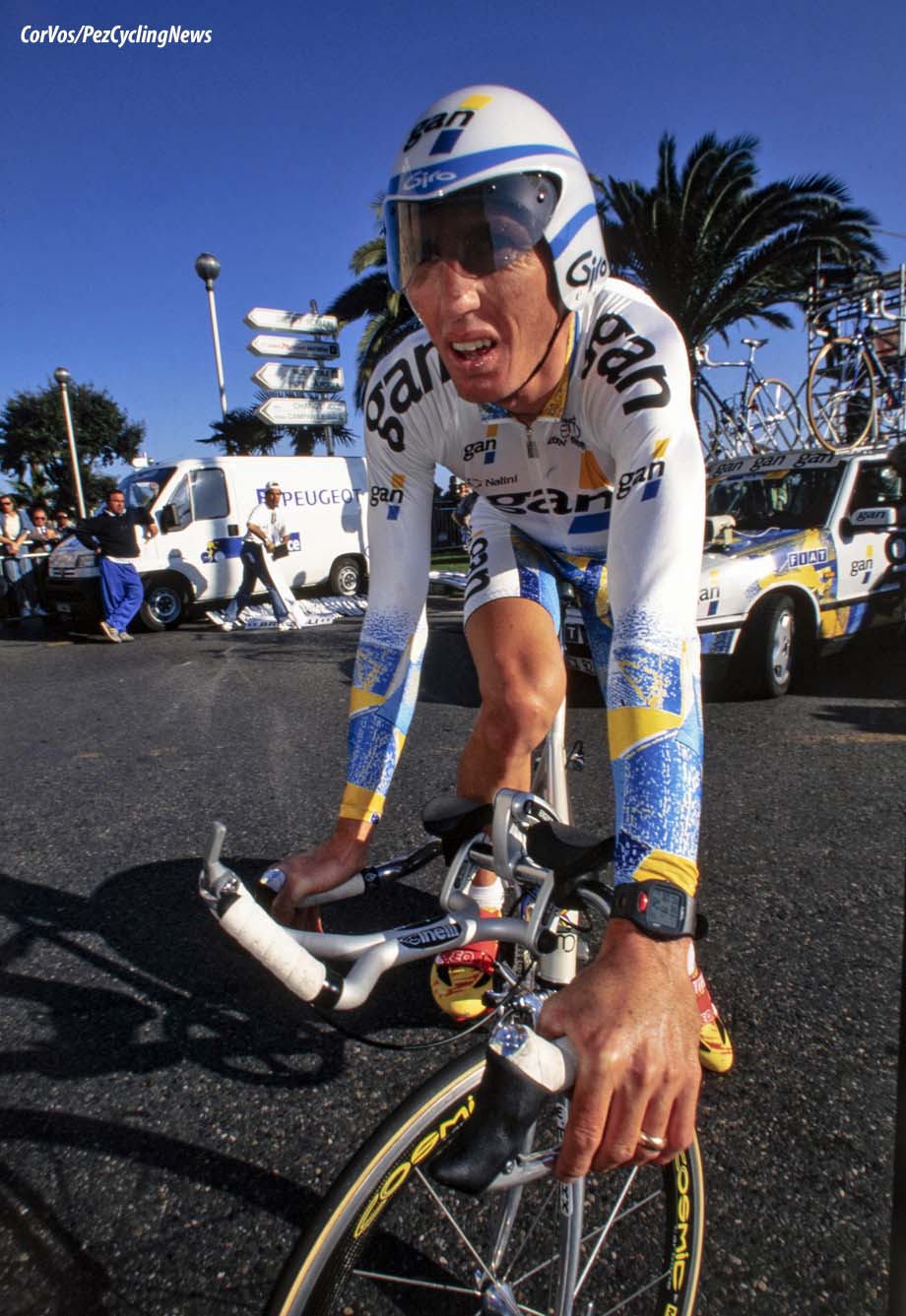 PEZ: You went to France, GAN for ’97 but I heard tales that you weren’t happy there?
I went in with a very positive attitude and was going well early in the year, I was fifth in Stage Seven of Paris-Nice, Montelimar-Sisteron which went over Mont Ventoux and then I was in the break of the day on Stage Eight. But in Milan-Sanremo I came down in a massive pile up and broke my scaphoid, I got it taped up but that effectively ended my Classics season. I was thoroughly disappointed by the culture in the team, the French favouritism, it was a step back for me and by the end of the season I was teetering on the brink of calling it a day. 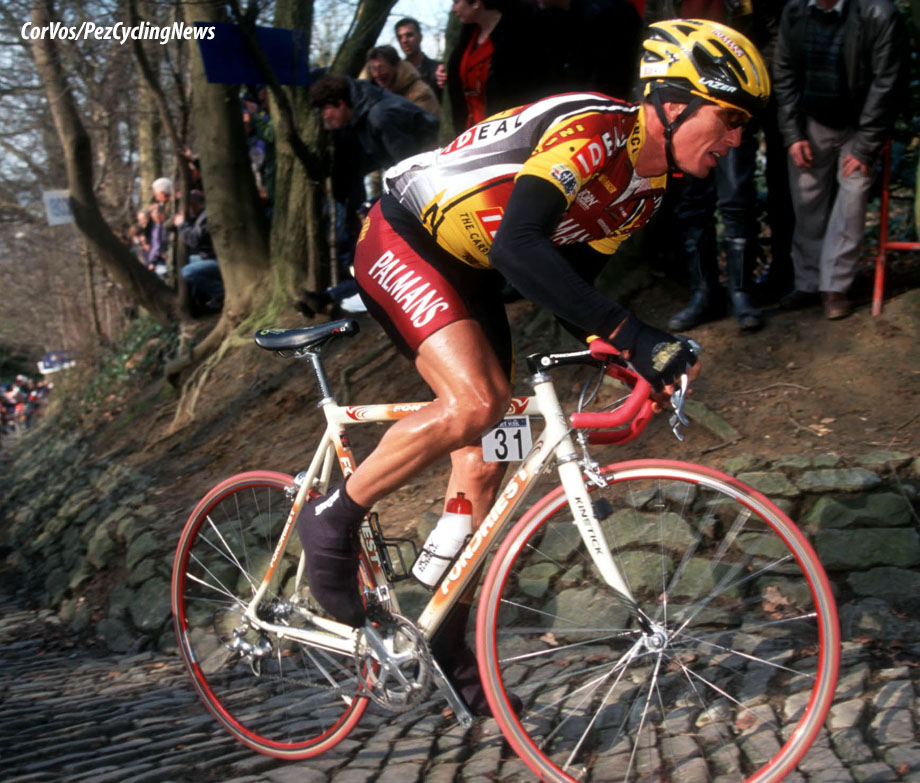 PEZ: But you signed with Palmans for ’98?
The team came to me and said; ‘we heard you’re thinking about quitting, come with us and just enjoy it, you and Carlo Bomans will be team leaders.’ It was a step down in terms of level of team but it was what I needed, I actually trained less but with more purpose and had a great early season with them; I won Nokere Koerse, was just outside the top 10 in Gent-Wevelgem and Flanders and was third in the Pino Cerami.

PEZ: But then there was that terrible accident in the Amstel Gold where your former DS, Cees Priem ran you over with the TVM team car.
He was looking sideways while handing a bidon out the window and ran me over – the court case is still dragging on, it’s just the way the law operates in Belgium. 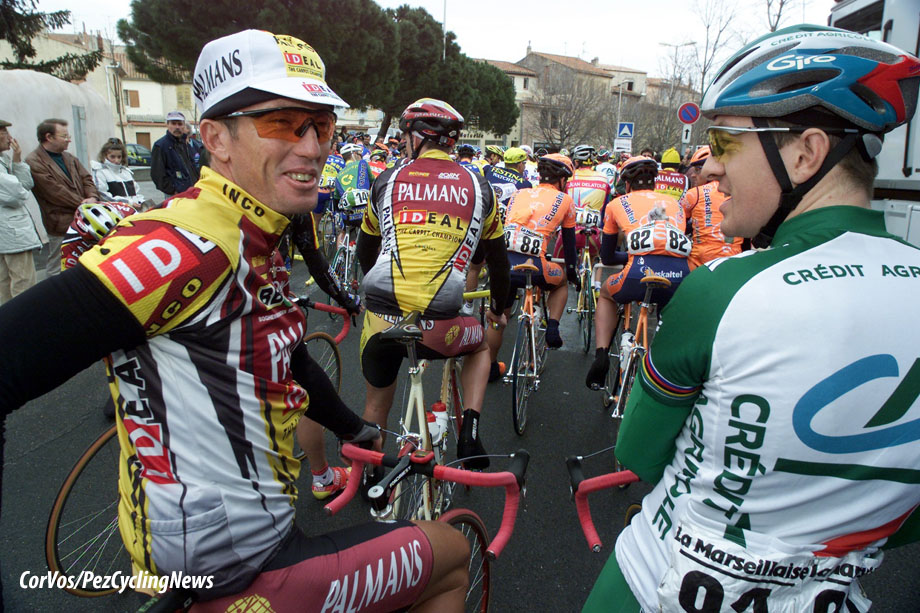 Next to Chris Boardman in the Ster van Besseges

PEZ: That stage win in Castilla y Leon in ’99 must have been a very special one?
It was, not just for me but for my family, especially my wife, it took a long time to get back to what I was before the accident. I was back – but with changes, I wasn’t really the same rider. 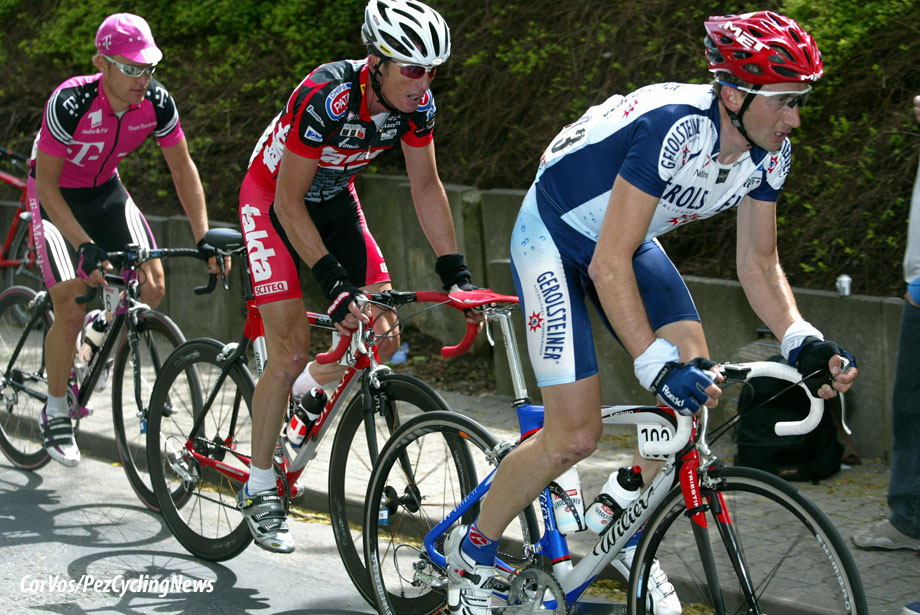 PEZ: Seventh in a very tough 2000 Worlds in Plouay.
I’ve re-run that one a few times, if things had gone a little differently there then I could have finished even higher. I was also 17th in the ’94 Worlds at Agrigento in Sicily and that was another occasion where I should really have finished higher. 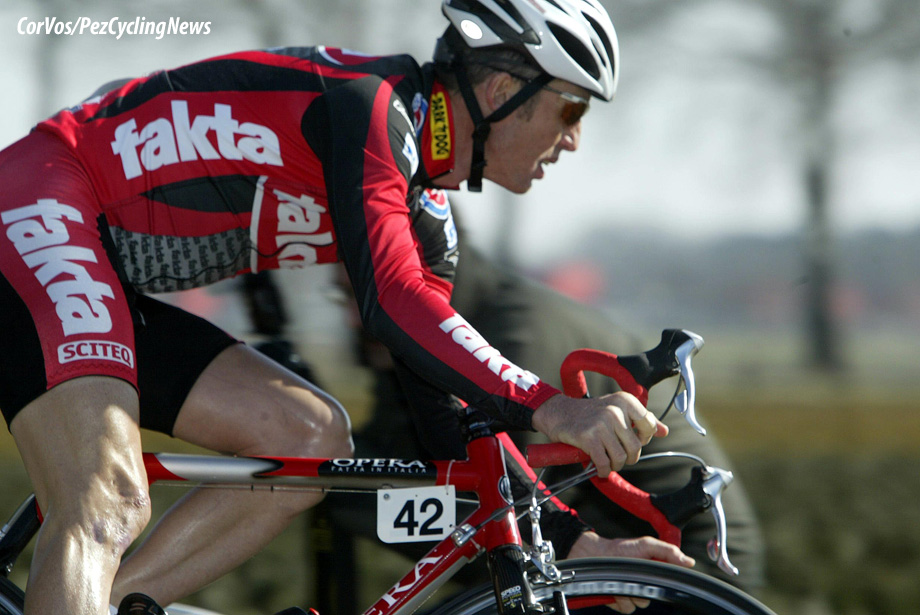 PEZ: The Danish Fakta team for 2001.
I was going to stay with Palmans but Fakta was a supermarket chain and the team was doing good things, it was on the up. It was a good time for Danish cycle sport, Bjarne Riis had the Jack & Jones team, which became CSC; he was right when he said that you really needed two teams to stimulate rivalry and create interest. I was road captain with good guys like Lars Bak, Jurgen Bo Petersen and Kurt Asle Andersen. I had a good year, winning the Pino Cerami and GP Fourmies with podiums in Ville de Rennes, Paris-Camembert, Brabantse Pijl, Paris-Camembert and Paris-Bourges. I was with the team for three years and the original intention was to move into management with the team but there was a management buy-out within Fakta and the new directors were unwilling to continue the sponsorship. 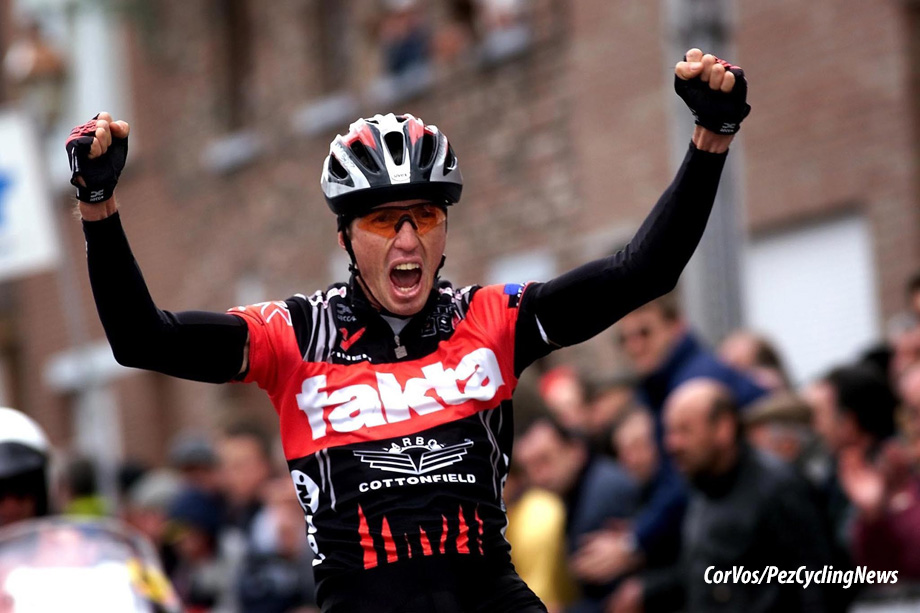 PEZ: You went to the Italian Alessio team for ’04.
I went with the remnants of the Fakta squad, Alessio had been a co-sponsor of the Fakta squad. It was a strong squad for the Classics with Magnus Backstedt, Fabio Baldato and Andrea Tafi and of course, Magnus won Roubaix that year for us. 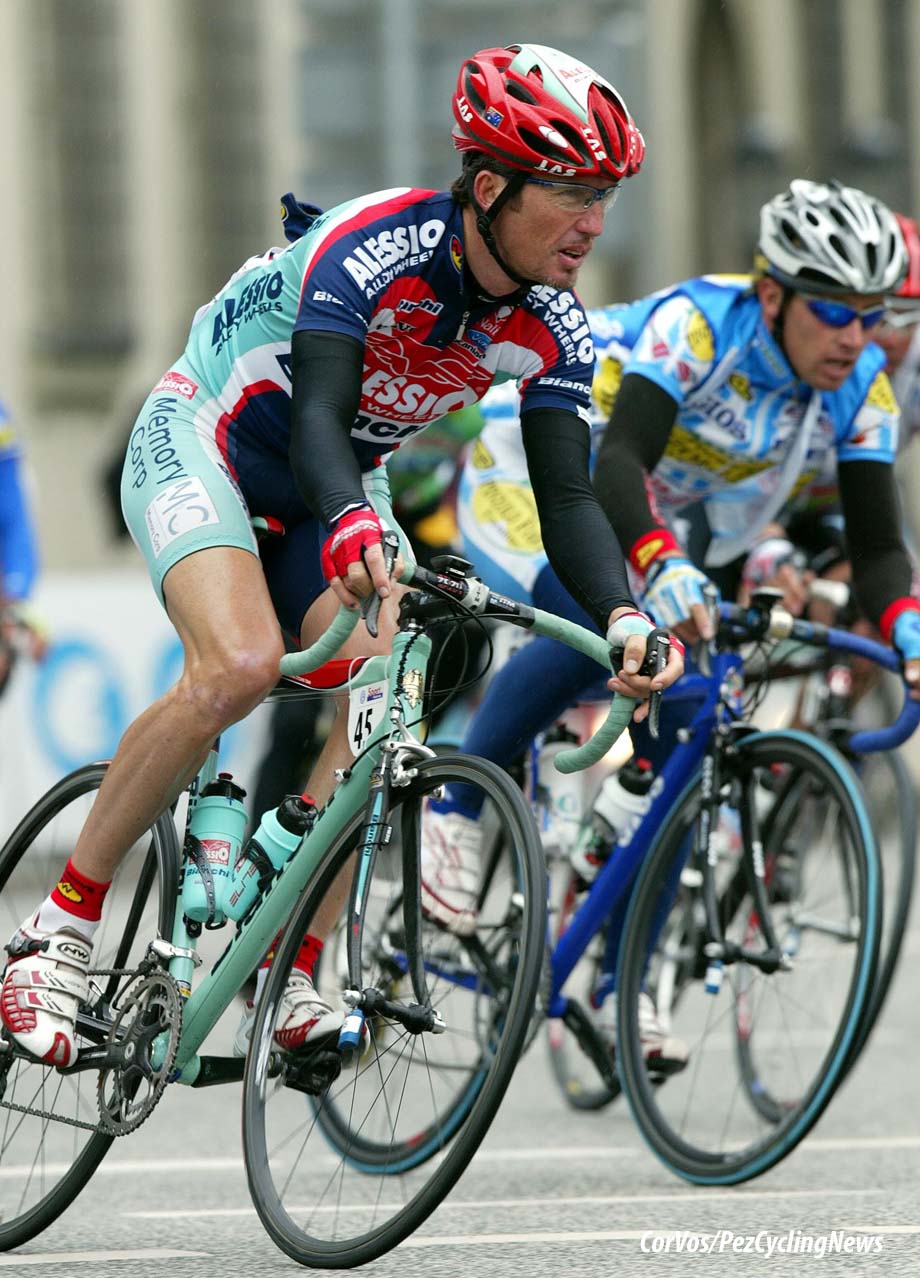 PEZ: Into the team car with CSC in 2005.
I rode my last Tour in 2004 but I realised that I wasn’t going to go on after that season; I had continual problems from my crash injuries, particularly damaged vertebrae. I was spending a lot of time where I should have been training on strength building exercises and rehab – in the races I was relying on experience. I’d had offers but was chatting with Bjarne Riis and he said he really wanted someone to join him and do research and development on equipment. He said that he had good riders for the Grand Tours but wanted to be strong in the Classics too, I could join, ride the Classics with the team to give them the benefit of my experience then move into team car for the second part of the season. I said that I didn’t think that would work, being one of the riders then moving into the car and giving them instruction. Bjarne agreed and I DS-ed from the start of ’05, I enjoyed my time there, building a Classics team with riders like Lars Michaelsen and Fabian Cancellara. Then there was the R&D side with Zipp and Cervelo which was something else I enjoyed. 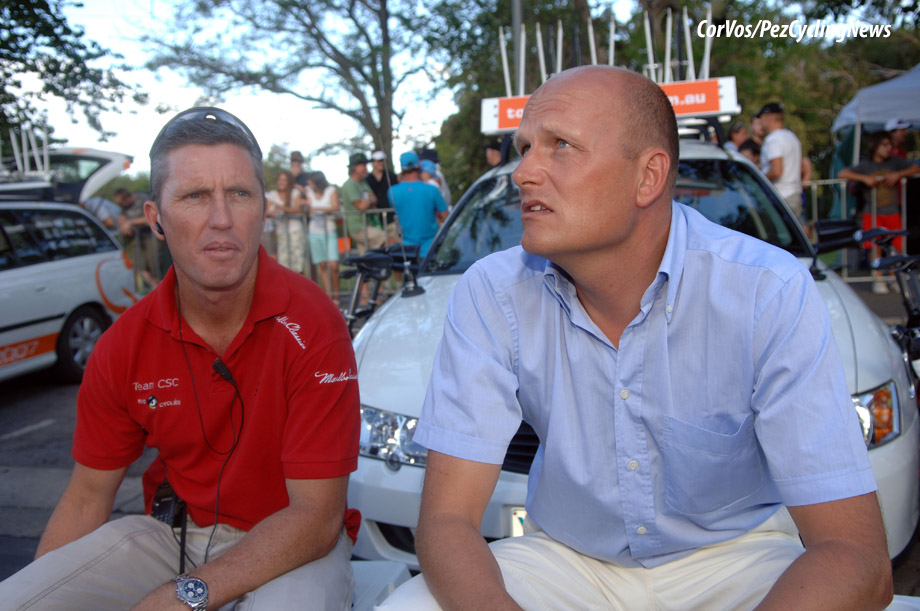 PEZ: And you went to the Cervelo Test Team for ’09 before going to Team Sky.
Things became very strained between Carlos Saiz and Bjarne, I moved over to Cervelo with Carlos but Shane Sutton began to speak to me about this new team that was going to be coming out of the UK. I was actually the Team Sky’s first official employee. I enjoyed the process of helping build the team, 90% of the non-English guys on the squad were recruited by me. I set up the service course and was involved in the gear testing, I brought Kask helmets on board and did a lot of the liaison with Adidas. The first training camps were January and February and I was conscious of the ‘English’ and ‘the rest’ aspect from the start but David Brailsford was always vocal about the whole concept of the team – which was to deliver an English Tour de France winner. That divide was really the beginning of the end for me. But it was Juan Antonio Flecha – a Spanish rider I had identified as a talent but wasn’t supported where he was – who gave Team Sky our first big win, in Het Nieuwsblad. 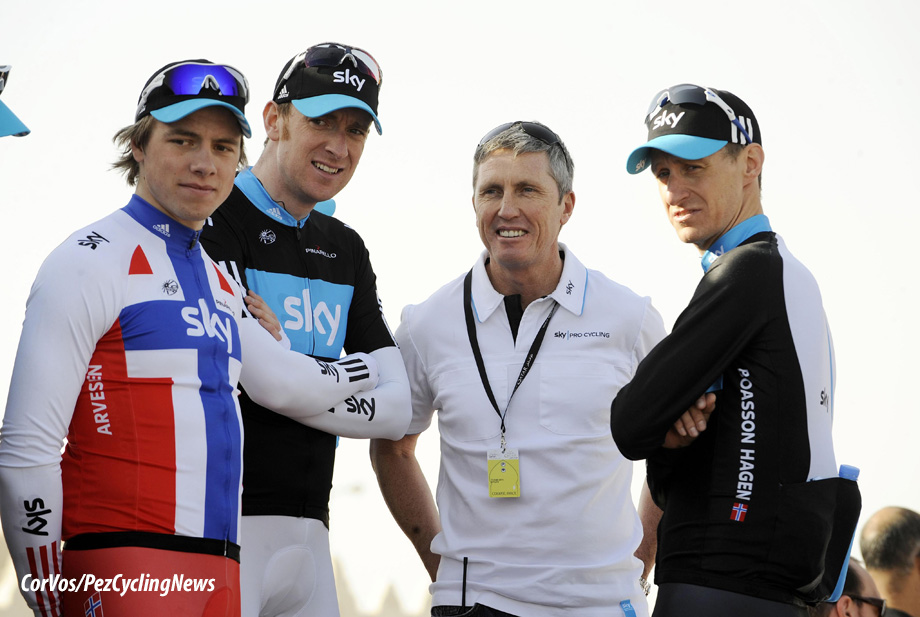 Sky from the start

PEZ: Then back to Oz?
Yes, I worked with Cycling Australia, where I was race director for all the National Championships and Road Series events. I’ve been involved in the Cadel Evans Classic since it’s inception, I helped design the course. And I was a consultant for the Melbourne Worlds. Now of course, I’m with Flanders Classics – and don’t forget to mention the new addition, the UCi Druivenkoers Overijse on August 29th! 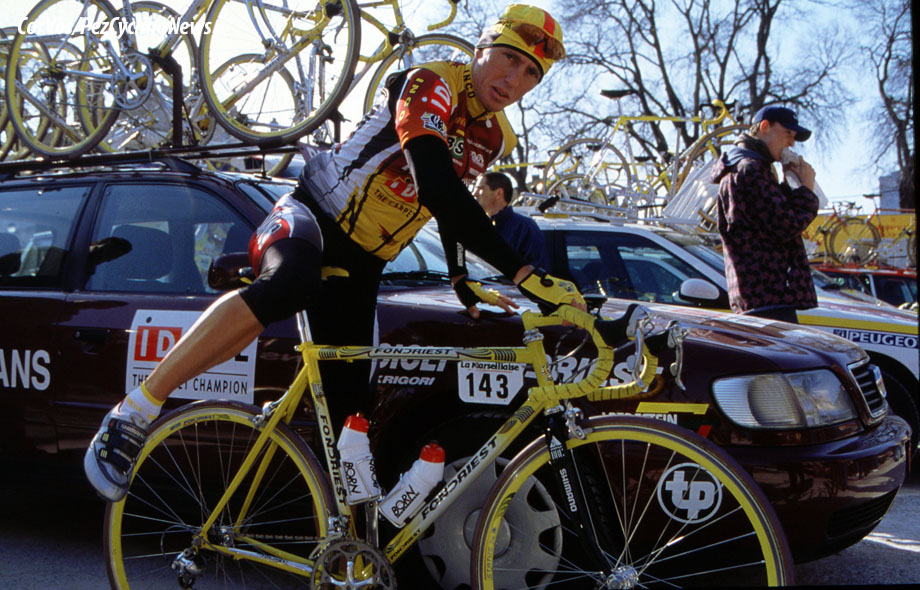