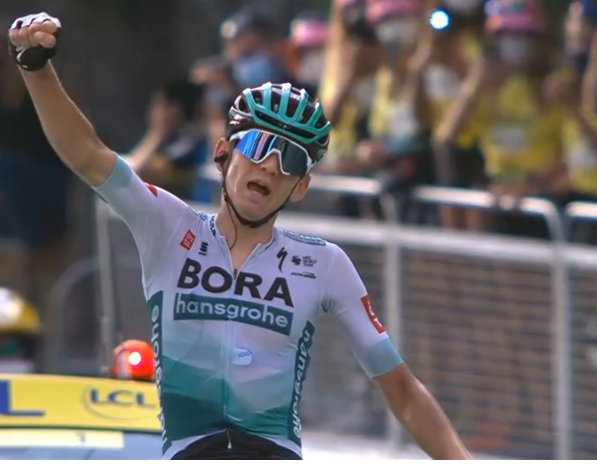 Lennard Kämna (Germany/Bora-Hansgrohe), who was second on the Tour de France’s Stage 13, claimed the biggest win of his career on Tuesday’s Stage 16. Except for a flash up on the Cat. 3 climb finish, the GC men called a truce the day before the HC-rated summit finish of Col de la Loze. Egan Bernal had another bad day regardless. Primož Roglič was safe in the yellow jersey.

You can find out where to watch the 2020 Tour de France here.

Five classified climbs awaited the riders over 164-km from La Tour-du-Pin to Villard-de-Lans. In the day’s climax, the race would assail the Cat. 1 Montée de Saint-Nizier-du-Moucherotte, where bonus seconds were on offer, before a gradual 17-km descent leading to the short Cat. 3 Cote 2000 climb to Villard-de-Lans.

Are you ready for the third and final week of #TDF2020?
The race resumes today with a very tough stage between La Tour-du-Pin and Villard-de-Lans, which returns after a 16-year hiatus. pic.twitter.com/MjfpoHI07m

Pierre Rolland’s Bid for the Dots

A profile like Tuesday’s to kick off the final week was guaranteed to elicit a big breakaway. Sure enough, by the slopes of the Cat. 1 Col de Porte, 18 riders were clambering 1:21 ahead of a small chase and 7:25 ahead of the peloton. Best placed in this platoon of escapees was Warren Barguil, +32:27.

Pierre Rolland (B&B Hotel-Vital Concept) has been prominent in this Tour’s breakaways, and on Tuesday he topped Porte and Cat. 3 Côte de Revel to draw level in the King of the Mountains competition with polka dot jersey holder Benoît Cosnefroy of AG2R. Unfortunately for the two Frenchmen, one of the two Slovenians at the top of the GC was more likely to wear the red polka dots in Paris.

The last Cat. 1 of the day, Montée de Saint-Nizier-du-Moucherotte, was 12.4 k of 6.3 percent. Rolland was back in the now-23-strong breakaway, up to 12:45 ahead of the GC bunch. Ineos and Sunweb both had a trio in the break. Five of the fugitives had won Grand Tour stages before.

Rolland’s teammate Quentin Pacher took his chances soloing from the foot of the climb. In the yellow jersey group, Egan Bernal, the worst day of his career two days behind him, lost contact on the early grades.

Egan Bernal, the 2019 Tour de France champion riding in the gruppetto with Sam Bennett and Greipel…what an image. #TDF2020 pic.twitter.com/UqBrL1iTcx

Bernal’s teammate Richard Carapaz and Julian Alaphilppe led Kämna over to Pacher and then dropped the B&B Hotel rider . Alaphillipe popped spectacularly, and over the top of the climb Kämna attacked Carapaz.

Kämna pushed on the descent and kept a large gap back to the reigning Giro d’Italia champion. Kämna adds a Tour victory to his Critérium du Dauphiné win in August.

Eleven minutes behind, Pogačar whipped up the pace at the bottom of the Cat. 3 Cote 2000 climb, dropping Nairo Quintana. Wout Van Aert took over for Jumbo-Visma. But in the end not even Angel Lopez was able to squeak out a second with the last attack. Tom Dumoulin jumped over Quintana into 9th place.