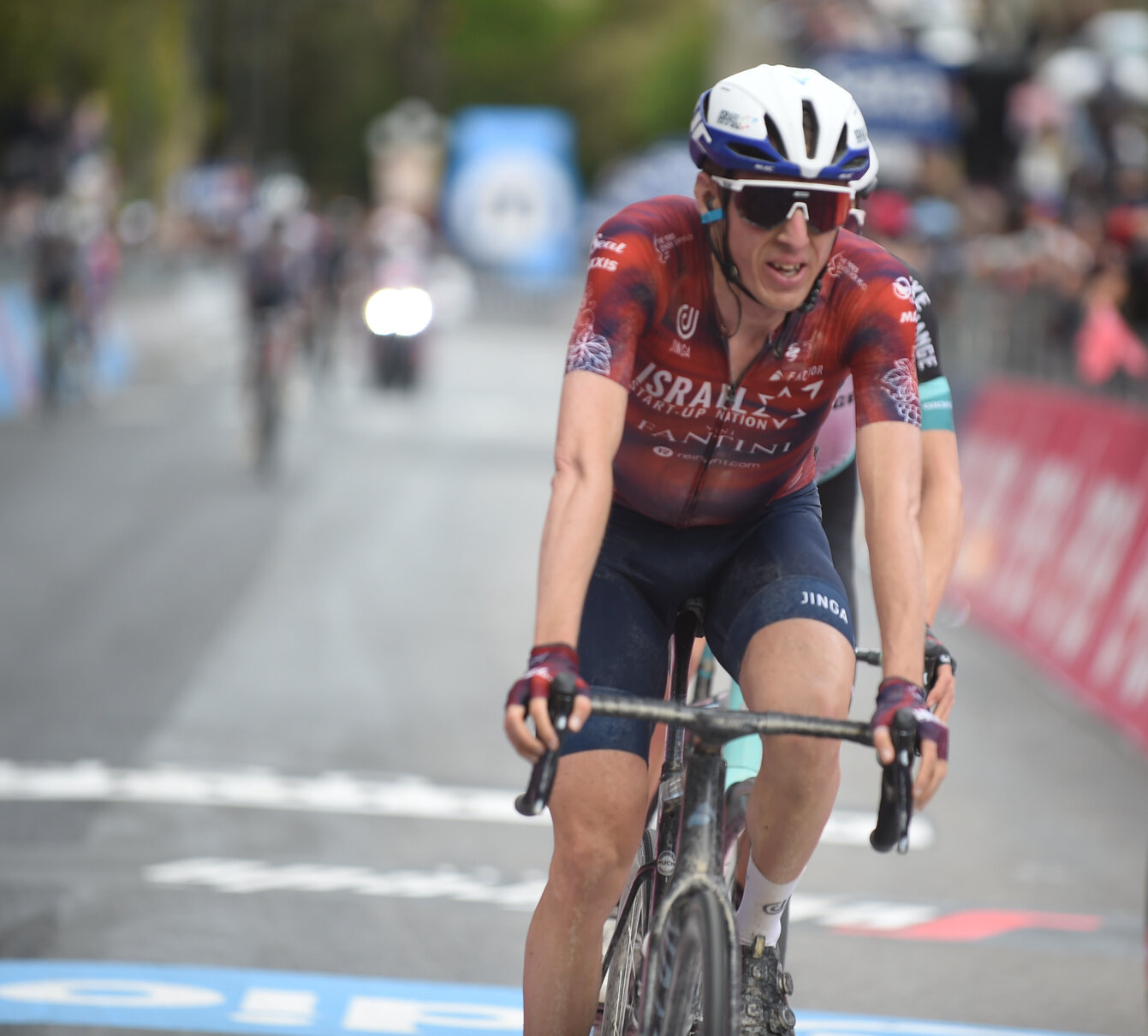 For the first time in the 2021 Giro d’Italia, Egan Bernal showed some weakness on Wednesday’s summit finish at the end of first stage back after the final rest day. Dan Martin took the day’s flowers from the breakaway, giving him stage victories in all three Grand Tours. Although pink jersey Bernal lost nearly a minute to Simon Yates, the GC riders who had the most disappointing days were Hugh Carthy and Giulio Ciccone.

Wednesday was another Cat. 1 summit finish, this time on the 11.5 km, 9.6 percent Sega di Ala, a climb near Trentino that was making its Giro debut. Before the Sega came the Passo San Valentino, another Cat. 1, 14.8 km of 7.6 percent. The riders finally had some pleasant weather.

This is what the #Giro riders will be facing today. More gaps between the GC contenders are expected on the tough final climb, Sega di Ala. pic.twitter.com/taSG0H0gje

It would be a tough ask to get a breakaway formed on the long downhill that started the stage. Eventually, after 40 km 19 riders broke free and tipped over the early Cat. 3 Sveseri climb with Dries de Bondt in the lead. This gang only took a maximum of 5:30 before Bike-Exchange, having taken over from Ineos Grenadiers, began to yank it back before Passo San Valentino.

Things got frantic in the peloton heading towards the narrow entrance to the San Valentino ascent, the fugitives still 3:30 up the road. An inevitable decanting of the breakaway happened, with Dan Martin whipping up the pace.

King of the Mountains leader Geoffrey Bouchard (France/AG2R-Citroën) fought hard to make it up to a Martin-powered trio before the peak of the climb to claim the maximum points. This was key to Bouchard’s bid to keep the blue jersey until Milan, as he put 73 points between himself and second place Bernal.

On the descent of the San Valentino, a crash brought down Remco Evenepoel, Vincenzo Nibali, and sixth-place Ciccone, who was coming back from a flat tire. All of Simon Yates’ were delayed in the crash. Evenepoel carried on with a bandaged left hand.

Two riders joined the Martin-Bouchard group before the final climb. The sextet had a 1:20 gap over the peloton, Ciccone having latched back on.

🏔️ In a few kilometres the Sega di Ala climb will begin!
Follow the live race: https://t.co/j8ggiiKeUQ

Martin shed the others on the opening slopes. Fourth-place Alexandr Vlasov (Russia/Astana-Premier Tech) faded early and Ciccone’s comeback to the peloton proved too much for him.

With Martin grinding on at the front, the pace of Ineos dropped third-place Carthy and seventh-place Romain Bardet. Tenth-place João Almeida attacked with 4.7 km to climb, followed by Yates. Bernal nabbed Yates.

He draws out the Maglia Rosa Bernal! pic.twitter.com/rlA5DaYBO2

To everyone’s astonishment, Bernal fell away from Yates and Almeida. Bernal had teammate Dani Martinez to help him. Martinez tried to cheer on his fellow Colombian.

Martin heard that Yates and Almeida were coming–he had 28 seconds as he went under the red kite. The Irishman held on to complete his Grand Tour hat trick.

Yates leaps back onto the podium at Carthy’s expense. Vlasov moves up a spot to fourth. Almeida rises two spots to eighth, while Ciccone drops to the bottom of the top-10.

Thursday is a long day with a few small climbs at the end. It should be a breakaway day.