Fiido’s D11 is a well-executed folder with some neat features. The removable battery means it’s more portable than many folders, and the fold itself is neat and well executed. The motor isn’t the most powerful, and the range is overstated, but this isn’t a bike for long journeys and for mixed-mode transport is a solid buy.

This isn’t Fiido’s first rodeo, even though it’s entirely possible you haven’t heard of them. The company has a range of folding bikes already, which are very much at the budget end of the market. The D11 feels a bit more premium, although it’s still not expensive; currently it’s just over £800 on geekbuying and the full retail price listed there is only just into four figures. It has a nicely-designed aluminium single beam frame which sports 20” wheels and is hinged at the centre for a reasonably compact fold. 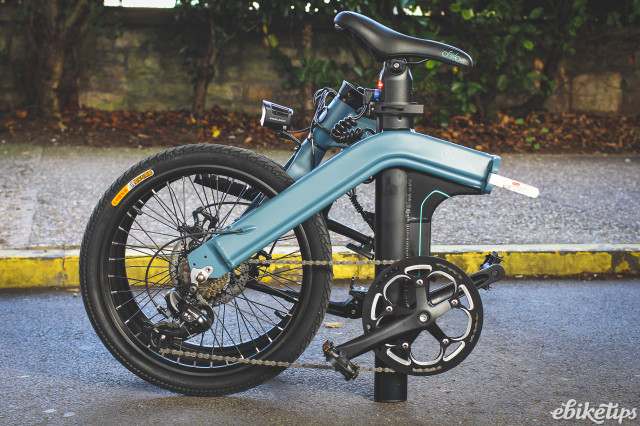 One of the issues with folding e-bikes is that they’re heavy, and so not easy to manhandle onto a train or into the boot of your car. That’s true here – the D11 weighs in at just over 19kg – but it has a trick up its sleeve. 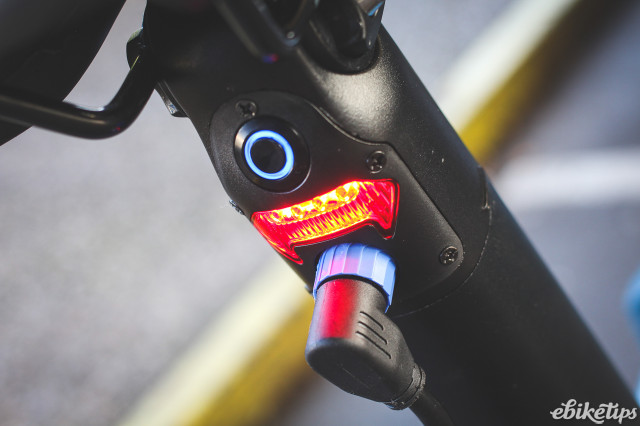 The battery is concealed in the seatpost – well, it is the seatpost, really – and can easily be removed. That’s good if you want to recharge the battery in your house, or just make your bike less attractive to thieves if you’re locking it in town. But it also means that the battery and bike can be separated for transport: you can sling the seatpost in a bag (a big bag!) and carry the bike without it, which drops the weight down to a much more manageable 13.5kg. Okay, it’s still not light, but it might make the difference between it working for you and not. The only downside is that it makes the folded bike less stable, as the bottom of the seatpost acts as a sort of stand. 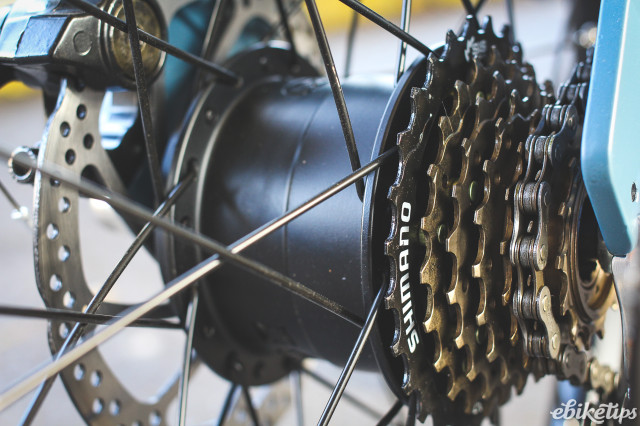 That battery is a 417Wh unit which drives a 250W rear hub motor. The 7-speed Shimano Tourney transmission doesn’t have a massive range but it’s a reasonable well-judged one, with gears big enough for cruising at the motor’s 25km/h limit on the flat and small enough to tackle some reasonable climbs. The motor isn’t massively powerful, but on a full battery it’s capable of dragging me and the D11 up my benchmark hill (1.5km at 5%, 12% max gradient) without too much of a struggle. There are three levels of assistance selectable from the bar-mounted LCD display by a slightly fiddly button, with only the top one really propelling you up to the 25km/h limit. The lowest mode is very pedestrian, and the second one is okay. This isn’t a bike you’ll enjoy riding without the motor turned on, by the way. There’s a lot of drag in the system. 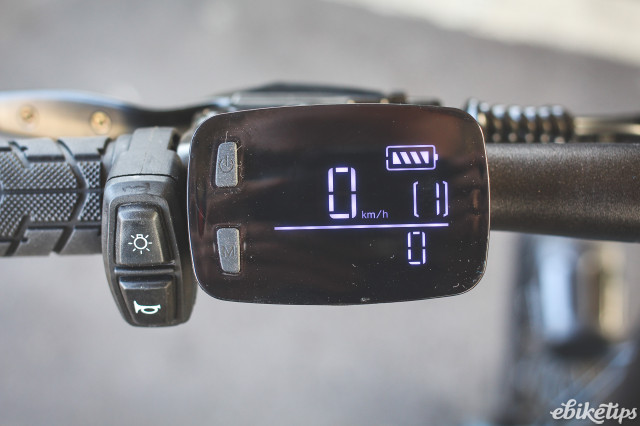 I mention the full battery above because the D11 is a bike that’s certainly best when fully juiced. Some bikes work equally well through the battery cycle, but that’s generally the more expensive ones with better battery management. The D11 is okay, but once I’ve gone up the big hill once, the next time it’s noticeably more of an effort. The bike suffers from the classic cheap e-bike problem of the load on the motor affecting the battery display, so the bars will go down when you’re chugging up a steep bit and then magically reappear when you’re cruising along the flat at the top. It’s not a huge issue, but it does mean more range anxiety. I generally ended up keeping the D11 charged up on a daily basis, because it works better that way. If your commute is short and not too taxing on the motor you’ll probably get a working week out of it.

Fiido say that the bike will provide a range of “up to 30-60km in the pure electric mode and up to 100km in the power assist mode”. The pure electric mode refers to the throttle which works independently of the pedal assist, so by the letter of the law probably isn’t legal in the UK, although you’d be unlucky to pulled up for it on a bike like this. The pedal assist uses a cadence sensor like many cheaper bikes, so spinning the pedals slowly and adding no power of your own will also make the motor do all the work; I can’t see the difference, really. Anyway, you won’t be riding for 100km, for a number of reasons. Firstly, the battery won’t last that long; on flat terrain I’d say 50km of mixed use in pedal assist mode is as far as you’d want to push it. 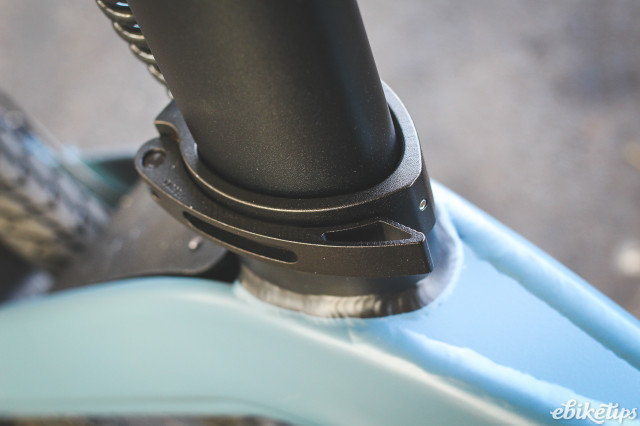 Secondly, this isn’t a bike designed for riding long distances: You could hop to the shops on it, or ride the last mile to work from the station, but the riding position isn’t designed for long distances: it’s quite short and upright, and the steering is fairly lively. It’s not an unpleasant bike to ride, far from it: it’s quite fun about town under power. But you wouldn’t choose it for a long commute, there are better bikes out there. I’m tall, and the reasonably upright seatpost means that the reach of the bike doesn’t grow that much as you raise the saddle. Smaller riders will probably find the bike a better fit. That being said, anyone between 1.5m and 2m tall should be able to ride it fine. There’s plenty of seatpost to play with. The quick release for the seatpost isn’t a great design: the knurled knob to adjust the tension is impossible to adjust with anything short of pliers, and indeed looked like it’d seen some action before it even arrived. It needs a bit of a redesign. The stem quick release to adjust the bar angle is okay, though. 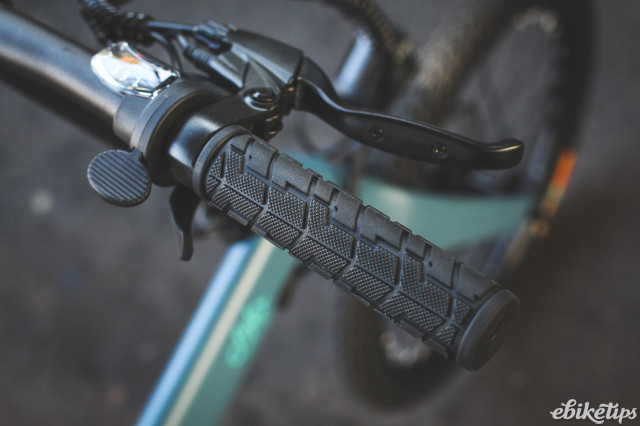 Thirdly, your hands would probably fall off, because the handlebar grips are the worst I’ve ever tried. And I’ve tried a lot of handlebar grips in my time. Basically, you’ll be wanting to replace them before you sling a leg over the D11.

Everything else on the bike does its job pretty well. It’s not top-end gear, and you wouldn’t expect that for this price, but you do get a good package. Our review bike had a workable kickstand and lights fitted. The rear light is in the seatpost, where the battery connector is, and the front is a fork-crown-mounted unit with a German-style cut-off beam that’s effective enough for riding after dark. 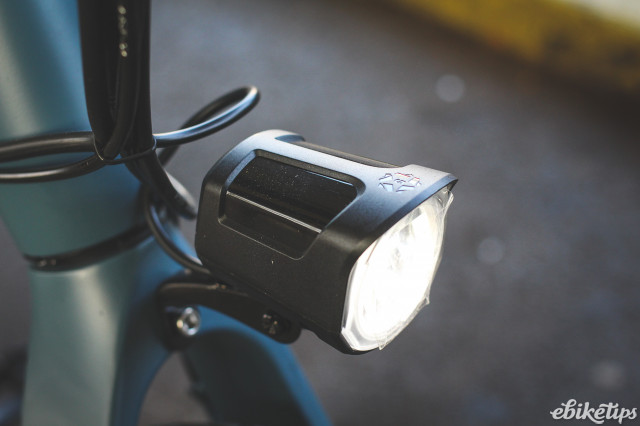 Our bike didn’t come with mudguards, but Fiido say that bikes bought from Geekbuying will be shipped with them. The disc brakes are mechanical and so not as powerful as hydraulics, but because they’re working on smaller wheels their effective diameter is a lot bigger, and I had no issues with them. The Cheng Shin tyres are okay; they’re not especially supple but they seem fairly sturdy and the grip they offer isn’t bad.

There’s always the issue of warranty returns to think about when you’re buying online from a non-uk supplier. Our bike had an intermittent fault which would cause it to turn off in use. It didn’t happen very often, and you could always turn it back on again, but if it was your money you’d be looking to get the bike replaced, or at least looked at to diagnose the fault. The electricals have a one-year warranty; It’s not entirely clear what the process would be there, but it’s fair to assume that’s it’s not going to be as straightforward as taking it down to your local bike shop or phoning up a UK distributor.

So, worth a punt? If you’re looking for an inexpensive folding e-bike then the D11 is pretty good for the money. At the moment it’s £800, and it’s well-specced for a bike below a grand. It’s quite practical, and especially so with the way the battery can be removed and carried separately to make the folded bike more convenient. Not everything is great, but you wouldn’t expect it to be at this price. Overall it’s a likeable bike for short journeys and mixed-mode commutes.