Stage 4 Race Report: A day for the sprinters that was nearly ruined by the climb of the Portella Mandrazzi, in the end the fast-finishers battled it out in Villafranca Tirrena. On the line, the photo finish equipment was needed to separate Peter Sagan (BORA-hansgrohe), Arnaud Démare (Groupama-FDJ) and Davide Ballerini (Deceuninck – Quick-Step). It was the French champion who was given the victory. João Almeida (Deceuninck – Quick-Step) added 2 seconds to his lead over Jonathan Caicedo (EF Pro Cycling) on the overall, thanks to the intermediate sprint. 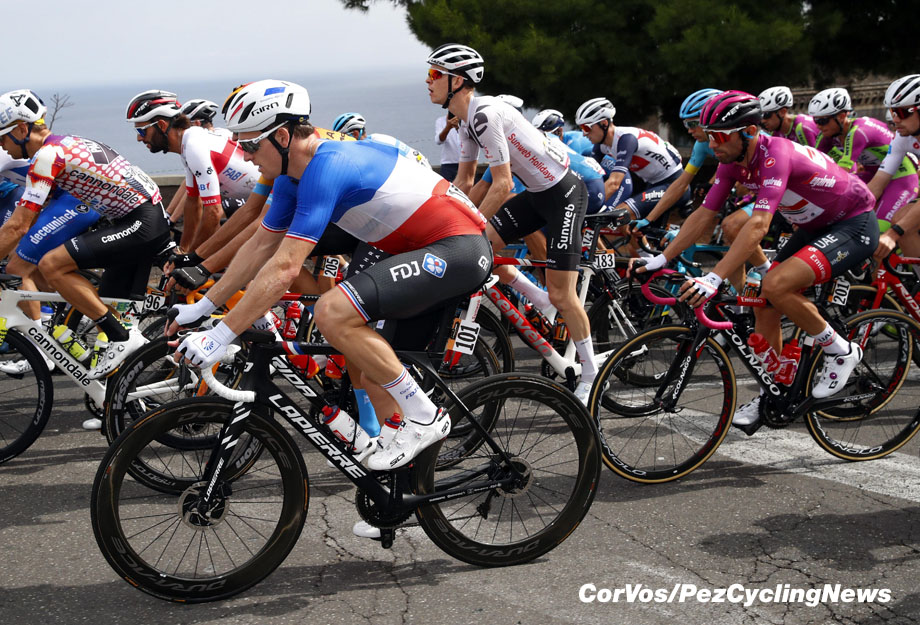 At the start of stage four to Villafranca Tirrena, the last stage in Sicily, the talk was mainly about a rider who didn’t start. Geraint Thomas was one of the top favourite in the 2020 Giro d’Italia, but the INEOS Grenadiers leader crashed on the stage to Mount Etna yesterday and lost more than twelve minutes on the stage winner. This morning Thomas was re-examined and additional X-rays showed that he suffered a fractured pelvis. Exit the 2018 Tour winner, Thomas, and the stage started with 172 riders on a 140 kilometre stage to Villafranca Tirrena. 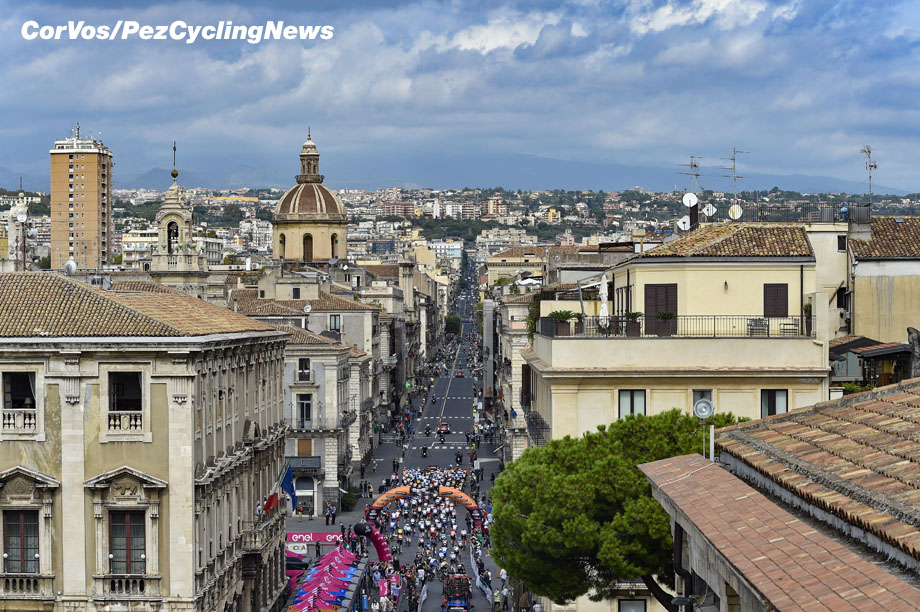 The start in Catania, Etna shrouded in cloud in the distance

Stage 4 – Catania-Villafranca Tirrena – 140km
A short stage with one relatively straightforward climb up Portella Mandrazzi, midcourse. From Catania to just outside Taormina, the roads are quite wide and mostly flat, but twisting and winding, with only a few straight stretches. After leaving the coastline, the route takes in the long Portella Mandrazzi climb (average gradient: 4%), followed by a lengthy descent that will lead the peloton to the northern coast of the island. Over the final 40km, the roads are quite wide, flat and straight, with a few urban areas along the route. 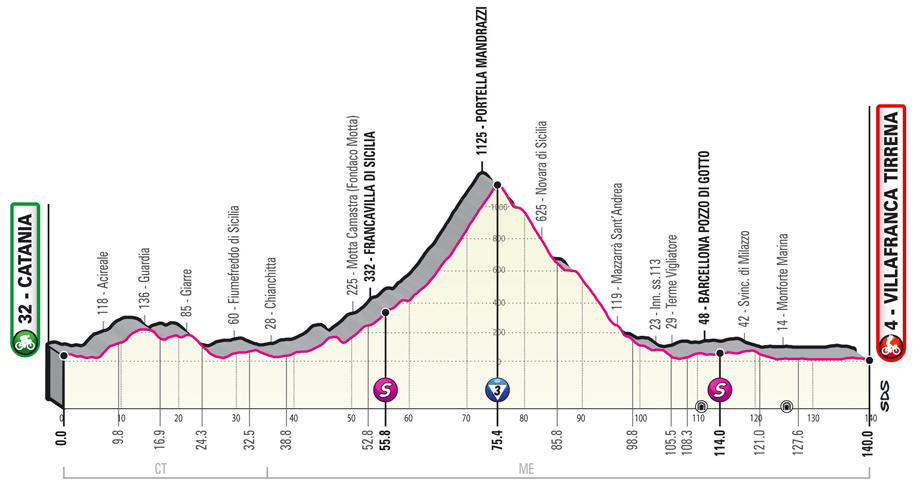 Final KMs
With less than 2km remaining to the finish, the route leaves the ss. 113 and descends slightly, following a few quite wide bends, and reaching the seafront. One last left-hand bend approximately 850m before the finish leads into the long home stretch (on 8m tarmac). 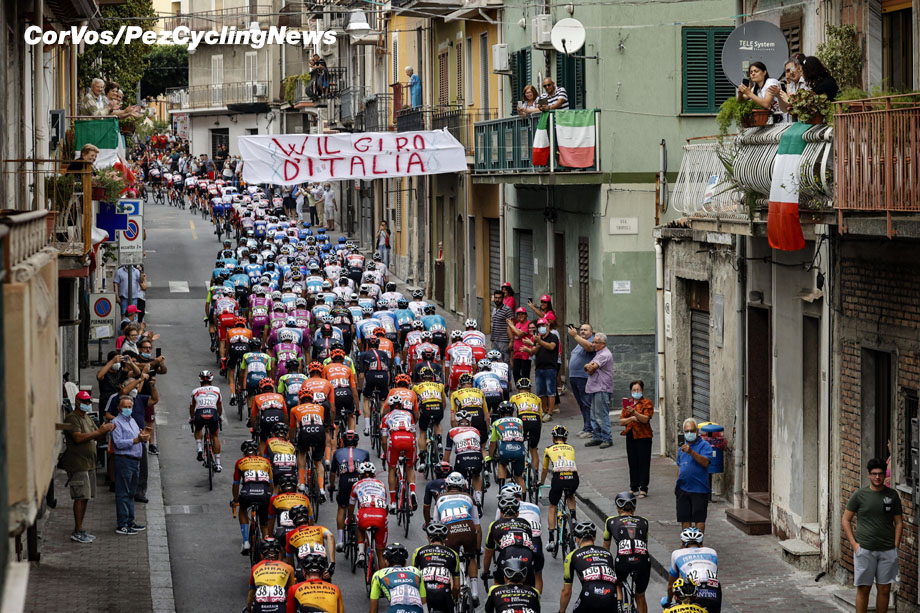 Through the streets of Catania

Simon Pellaud attacked shortly after the official start. The Androni Giocattoli-Sidermec Swiss rider was accompanied by Kamil Gradek (CCC) and Marco Fverslagi (Vini Zabù-Brado-KTM). The peloton let them go, allowing the three to take almost 5 minutes. In the peloton we saw riders from Cofidis, Groupama-FDJ and UAE Team Emirates do the chase work for their sprinters Elia Viviani, Arnaud Démare and Fernando Gaviria. As a result, the lead of the early break of Pellaud, Gradek and Fverslagi continued to fluctuate around 4 minutes to the start of the 20 kilometre long climb of the Portella Mandrazzi. 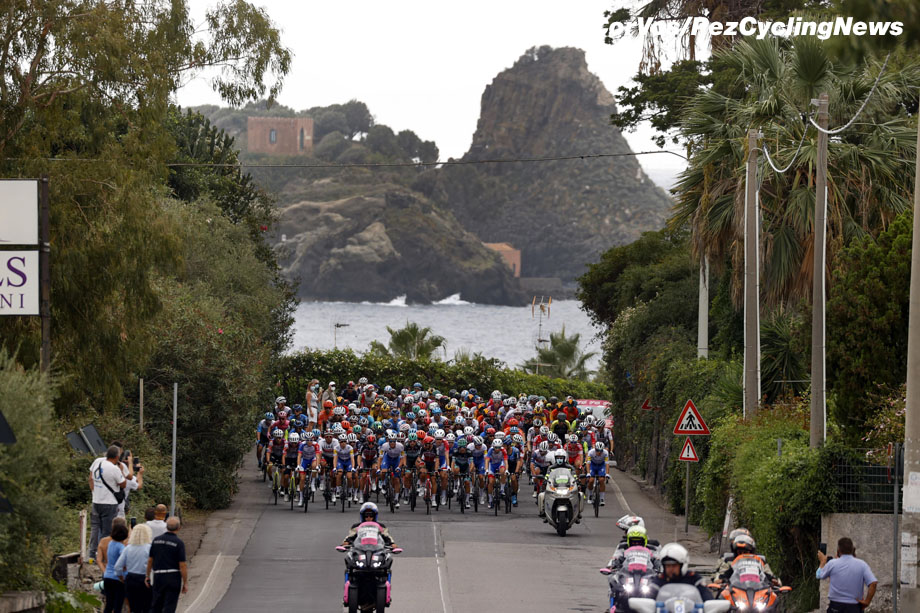 Before the climb was over, there was more crashes in the peloton. First there was a crash of Ben Swift and a rider from UAE team Emirates, but both riders were able to continue. Not much later Pieter Weening also crashed after riding over a water bottle, similar to Thomas yesterday. Trek-Segafredo’s experienced rider looked bad at first, but eventually got back on his bike. The escapees had started the Portella Mandrazzi, the only climb of the day and a probable split point in the race. BORA-hansgrohe decided to increase the pace. The German team wanted to get rid of the pure sprinters, and we soon saw Gaviria and Viviani in trouble. 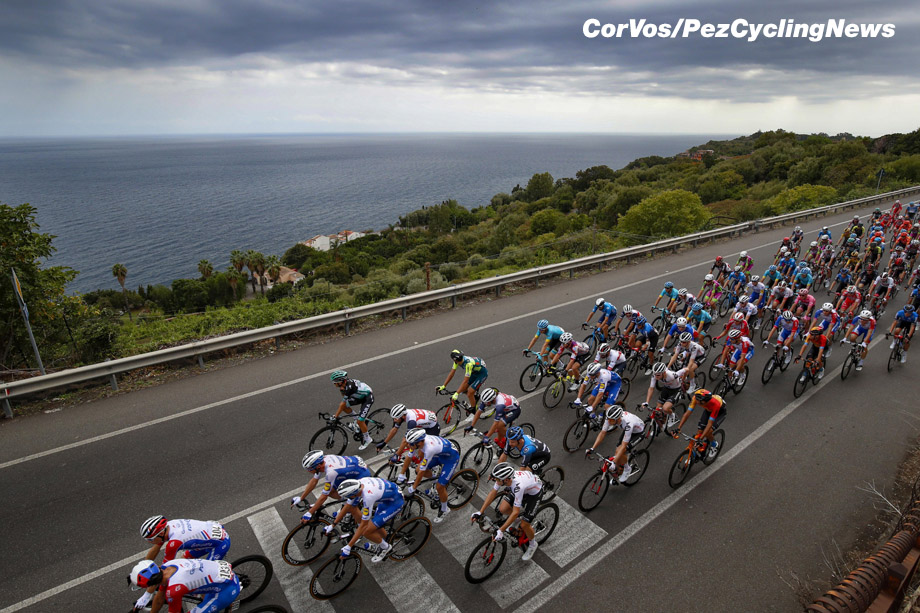 The race followed the coast out of Catania

The Colombian and Italian had teammates with them, but lost more and more ground on the ramps of the Portella Mandrazzi. Sagan and Michael Matthews, who had no trouble keeping up with the pace, still had the presence of Arnaud Démare in the front group. The French champion managed to hang on to the top of the climb. At the front; Pellaud turned out to have the best legs and the Swiss attacked was first over the Portella Mandrazzi for seven KOM points. On the misty and wet descent, the Androni Giocattoli-Sidermec rider dropped like a stone, his lead over the peloton at that time was still 1:30. 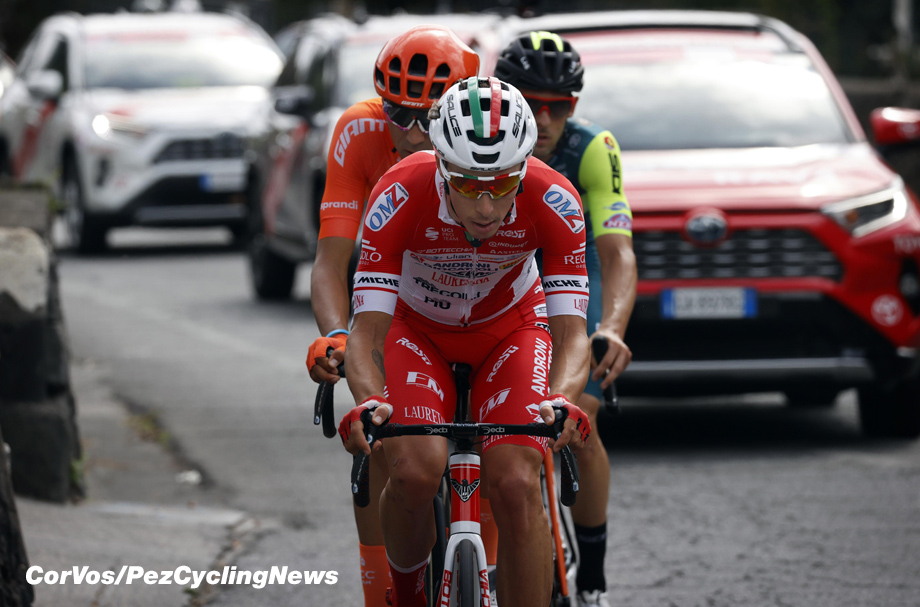 Break of the day led by Simon Pellaud (Androni Giocattoli-Sidermec)

In the thinned peloton; Trek-Segafredo were in control. This broke the group into bits for a while, but it soon regrouped. From the early break, Rapporti and Gradek were caught 47 and 38 kilometres from the finish, but Pellaud was still one minute ahead of the peloton with 30 kilometres to go. BORA-hansgrohe did not want the dropped sprinters to return to the peloton and so Sagan’s team rode flat-out again to keep the pace high. The German team couldn’t prevent a group containing Viviani from rejoining. Gaviria was on a furious case to get back. 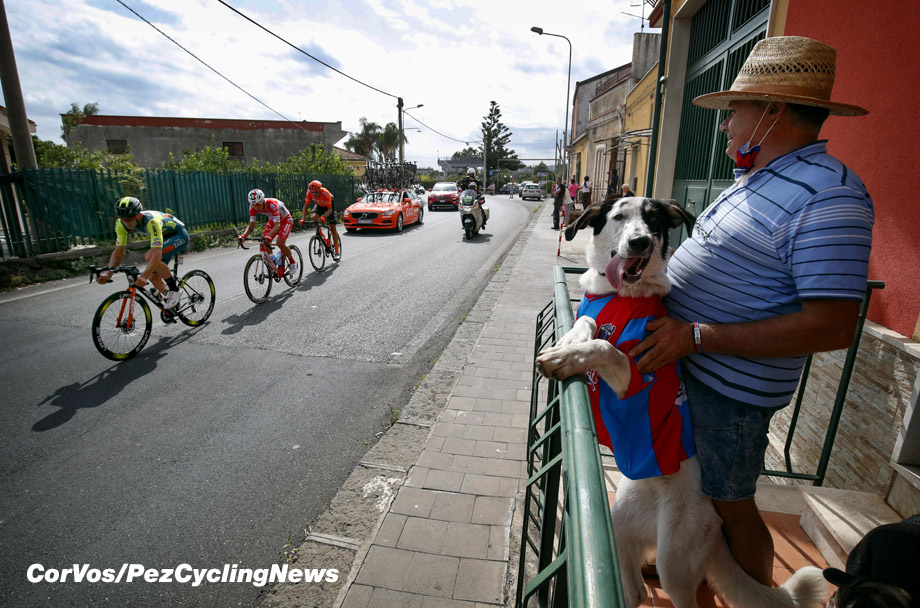 At 26 kilometres from the line, Pellaud took three bonus seconds at the intermediate sprint, but much more exciting was the battle between João Almeida and Jonathan Caicedo for the remaining seconds and the pink jersey. It was Almeida who did the best sprint by coming through second for two seconds bonus. Almeida’s teammate Davide Ballerini also took the 1 second, which gave Almeida a two second lead on the GC. 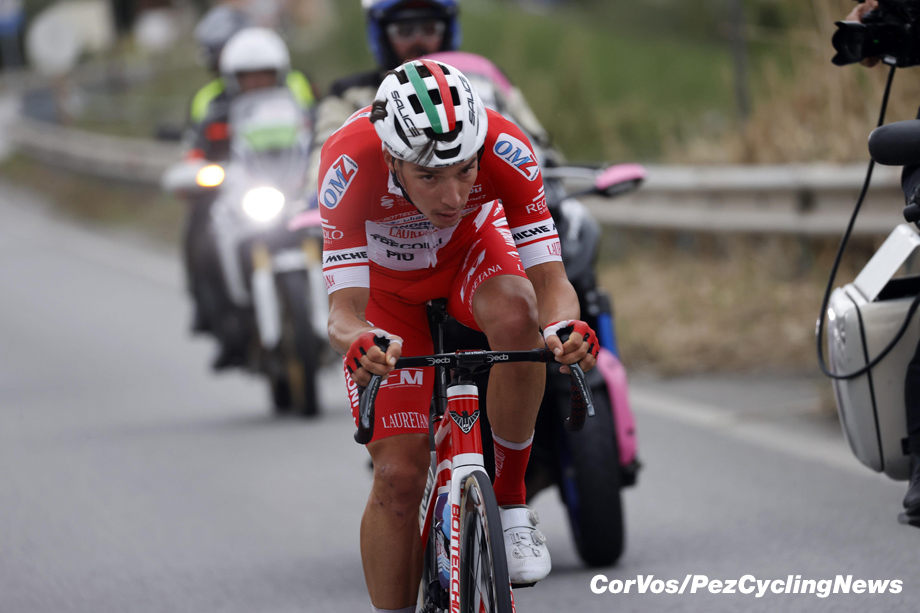 Pellaud was eventually on his own

After the intermediate sprint it was up to the sprinter teams to put their trains on the front, after they caught the last survivor, Pellaud. With Démare, Viviani, Matthews and Sagan, most of the top sprinters, despite a tough final, were still at the front. Colombian fast-finishers, Gaviria and Álvaro José Hodeg were at 30 seconds for a long time and eventually threw in the towel with 6 kilometres to go. 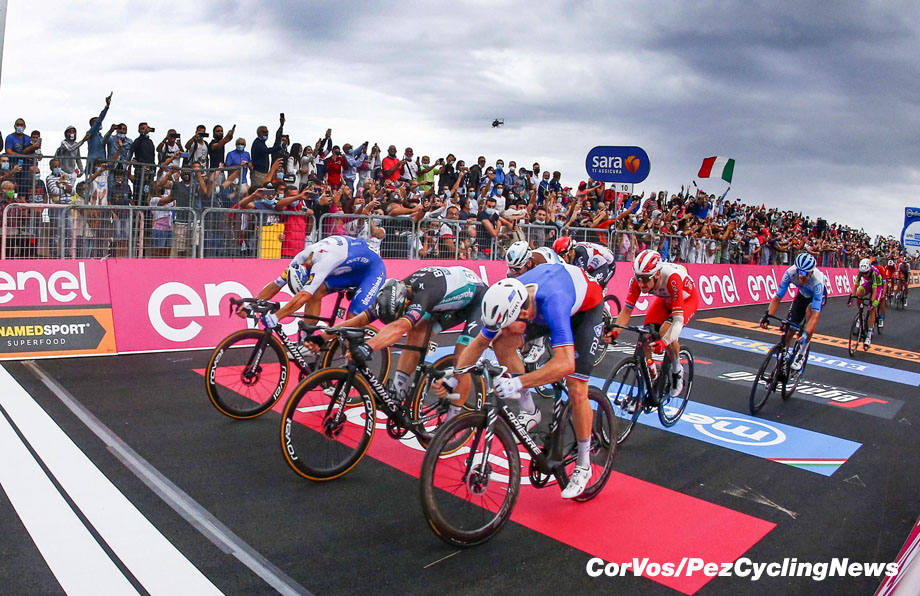 With 5 kilometres to go, Groupama-FDJ pulled hard on the front, but Démare’s team was overtaken by Israel Start-Up Nation 2 kilometres later. It was all change in the last kilometres, as eventually Groupama-FDJ managed to take the initiative again. Miles Scotson surprised the sprinters and had a gap on the peloton with 1K to go, but Cofidis pulled him back and we had a classic bunch sprint. Sagan started the sprint first, but the Slovak was beaten by Démare on the line, although the difference was very small. No one knew the result for a few minutes, but after studying the photo finish, Démare indeed turned out to be the winner of the fourth stage. Sagan finished second, Ballerini had to settle for third. 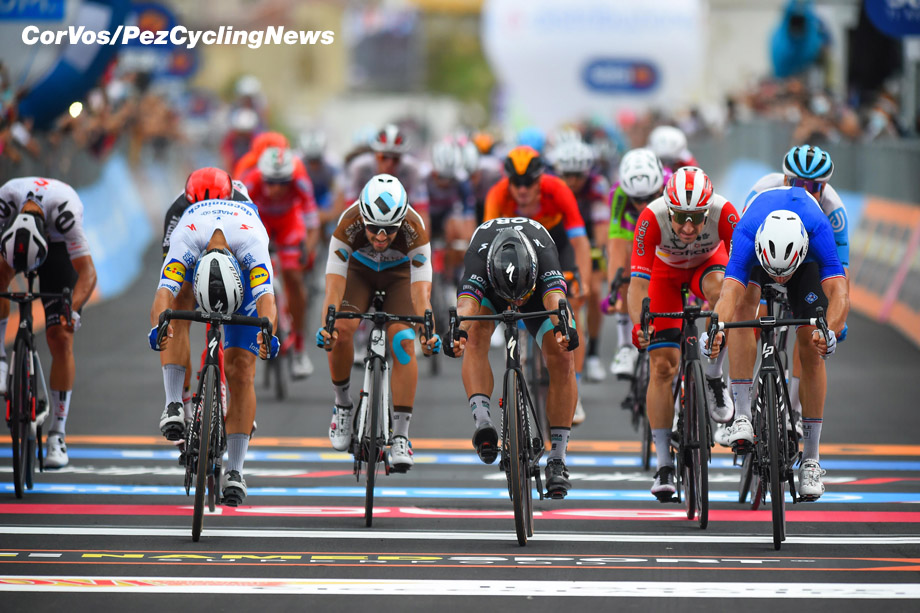 Stage winner, Arnaud Démare (Groupama-FDJ): “Behind my dad’s scooter I often train for the last jump. Today it paid off but I wasn’t sure that I’d won when I crossed the line. It was so tight. It’s fantastic to have won a Giro stage already in the first days of the race.”

Maglia Rosa, João Almeida (Deceuninck – Quick-Step): “I tried to go for the time bonus at the intermediate sprint, I can be fast in a small group. I am very happy to wear the Maglia Rosa another day.”