Stage 6 Race Report: French champion Arnaud Démare (Groupama-FDJ) battled his way to the front at the end of a chaotic finalé and held off all the others for what he made look like an easy win. Michael Matthews (Sunweb) was second and Fabio Felline (Astana) third. The Frenchman also pulled on the points leaders jersey. João Almeida (Deceuninck – Quick-Step) finished in the bunch to hold the overall lead. 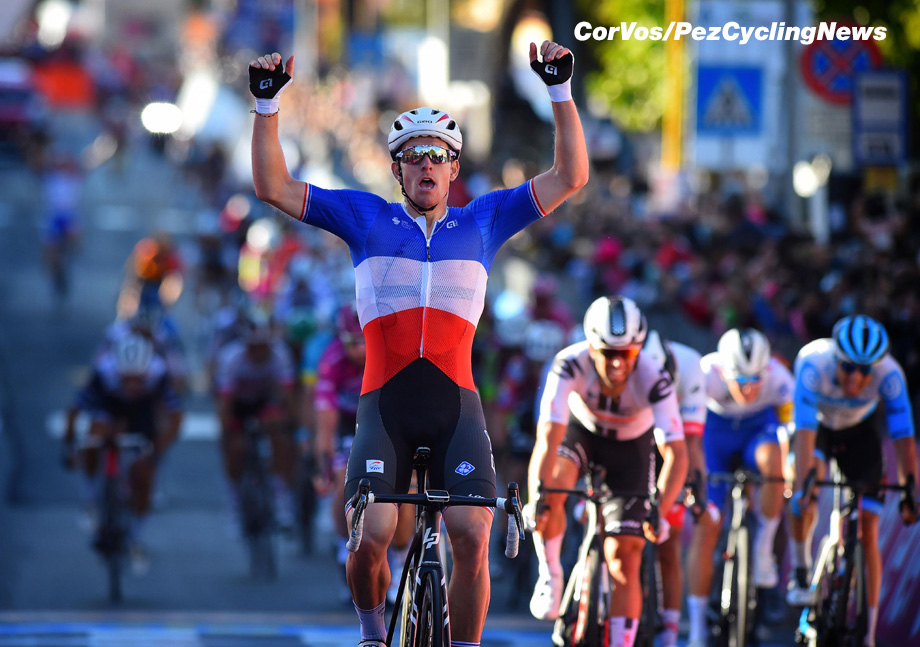 On a stage that the sprinters doubted they had a chance of victory, Arnaud Démare took his second 2020 Giro stage win. 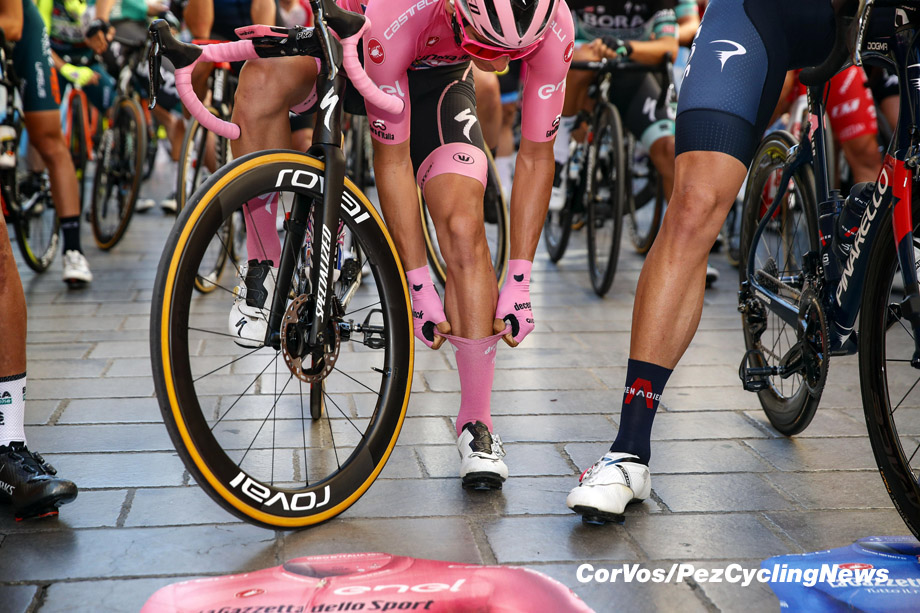 Stage 6 – Castrovillari-Matera – 188km
At first, the stage is wavy and demanding, both in its direction and its profile, running within the Pollino national park. The route then levels out past the lake of Monte Cotugno, heading for Matera after passing through the province. A few mild climbs and descents in the closing part lead to punchier bits in the stage finale. 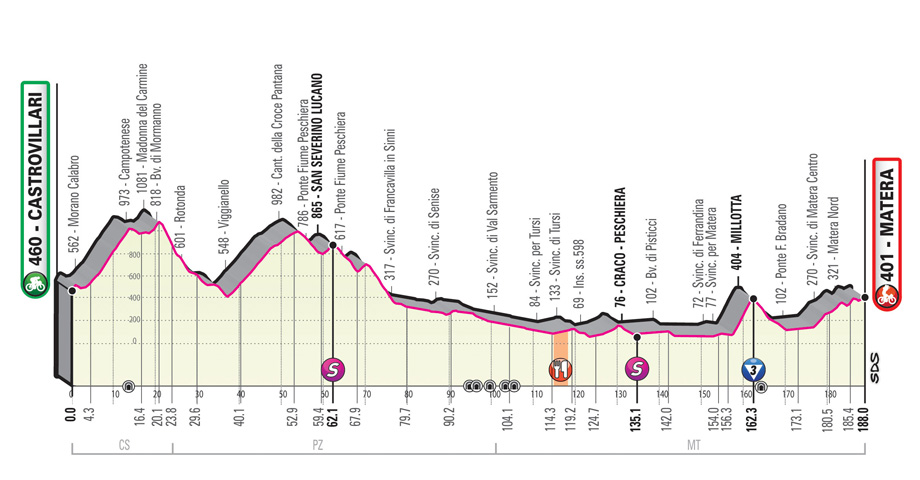 Final KMs
The final kilometres descend slightly along wide city avenues with a few mild bends, all the way to the red flag. Two left-hand bends shortly before the last kilometre lead into the 800m long home straight, on a slight incline. The finish line sits on 7.5m wide tarmac. 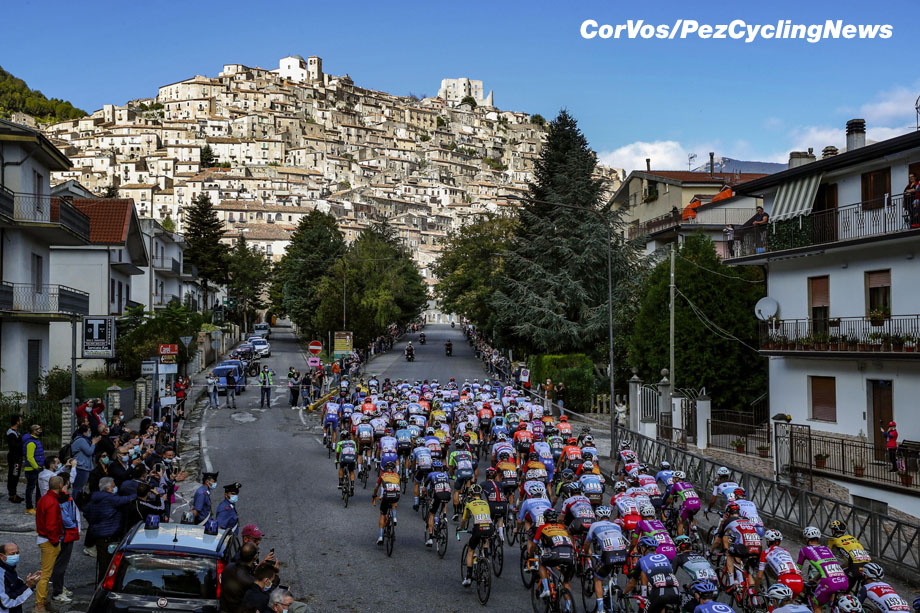 Lots of villages clinging to the hillsides in this area 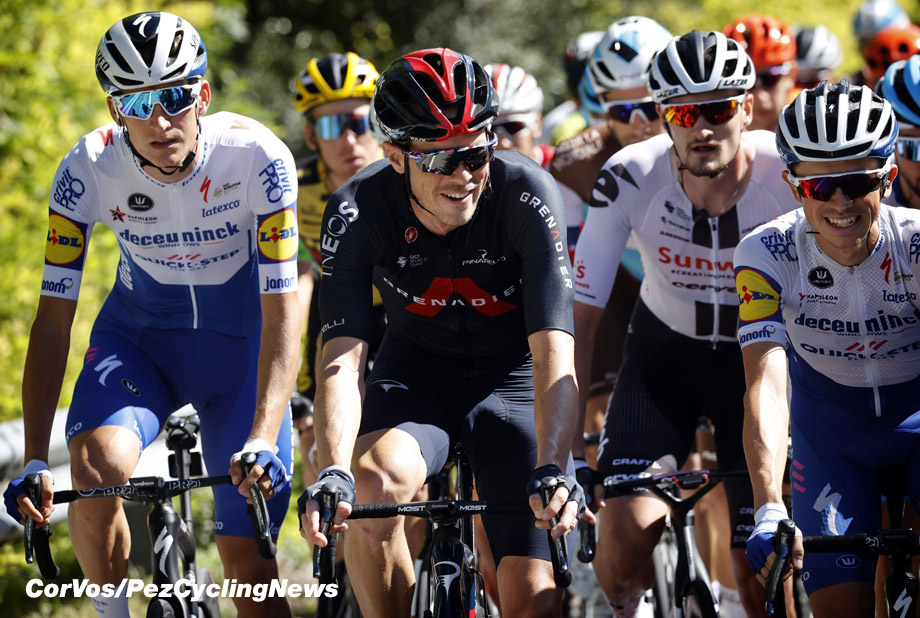 In the peloton the men of Deceuninck – Quick-Step were on the front, but the teammates of overall leader, João Almeida were not in any hurry. The escape drove further away and took almost 9 minutes. Bais, Zana, Rapporti and Whelan still had almost 140 kilometres to go to the finish in Matera. 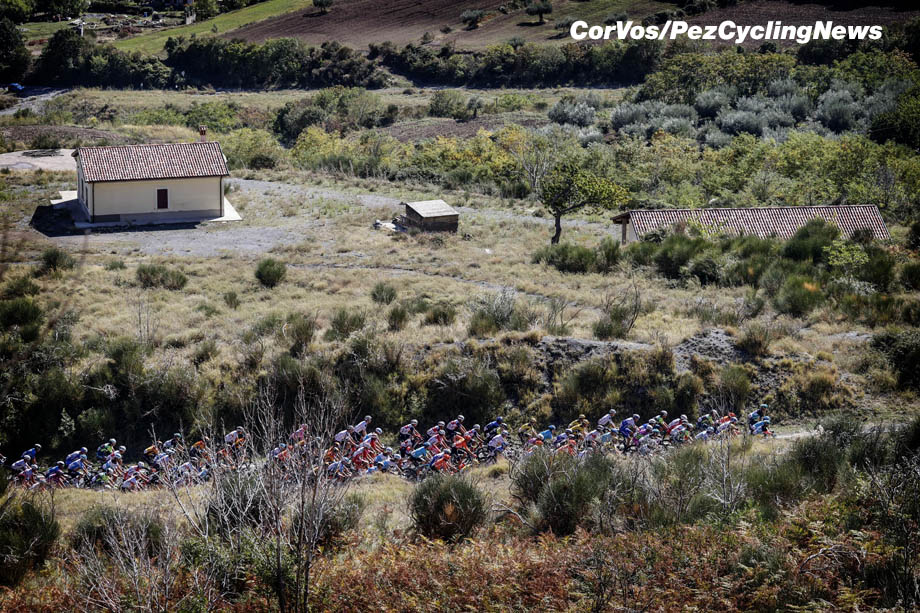 The first time for the Giro on these roads

The important intermediate sprint of the day came 126 kilometres from the finish and was won by Bais. In the peloton, Arnaud Démare and Peter Sagan had a battle for the points classification. The French champion turned out to be the fastest and took two points from the leader, Sagan, who lost an extra point after a misunderstanding with his teammate, Maciej Bodnar. 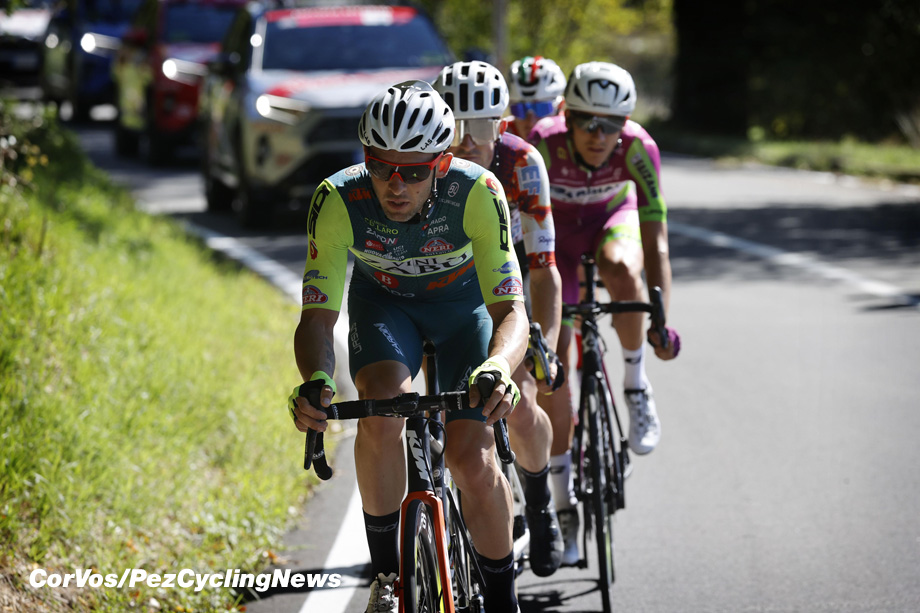 After the intermediate sprint in San Severino Lucano, BORA-hansgrohe came to the front of the peloton to work with Deceuninck – Quick-Step. The German team quickly took 2 minutes off the lead, and so the four escapees started the last 90 kilometres with 7 minutes in hand. 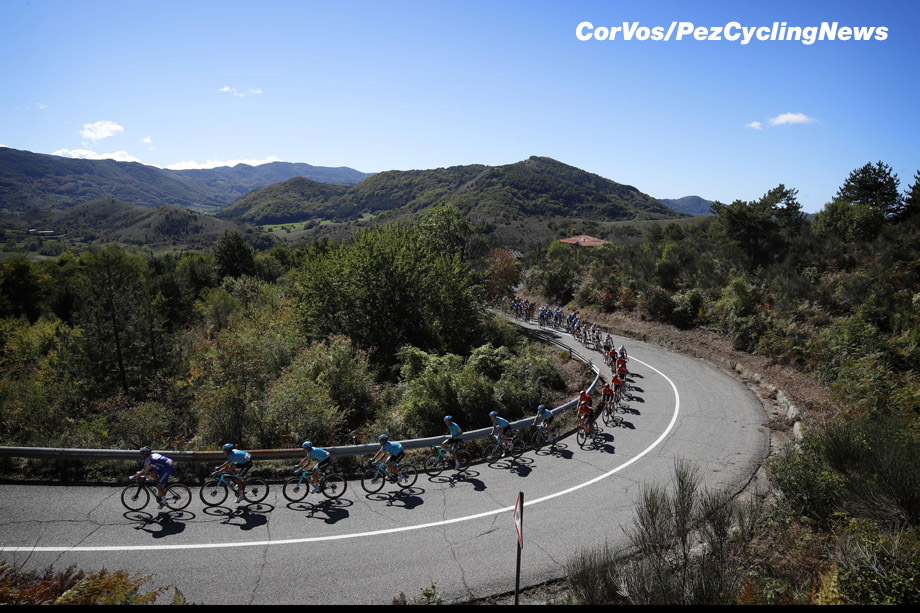 BORA-hansgrohe were doing the chase work behind the break

The lead of the attackers disappeared in the following kilometres, although BORA-hansgrohe decided at 40 kilometres from the finish to ease up on the gas. The difference to the leading group was only 2 minutes and so Sagan’s men could afford to slow down a bit towards the Galleria Millotta. Just before the 5 kilometre climb (6.9%), pink jersey wearer, Almeida stopped at the side of the road to change radios, but was knocked off the bike by an inattentive Brendan McNulty (UAE Team Emirates). Almeida was okay, and with the help of his teammates he managed to rejoin the peloton. 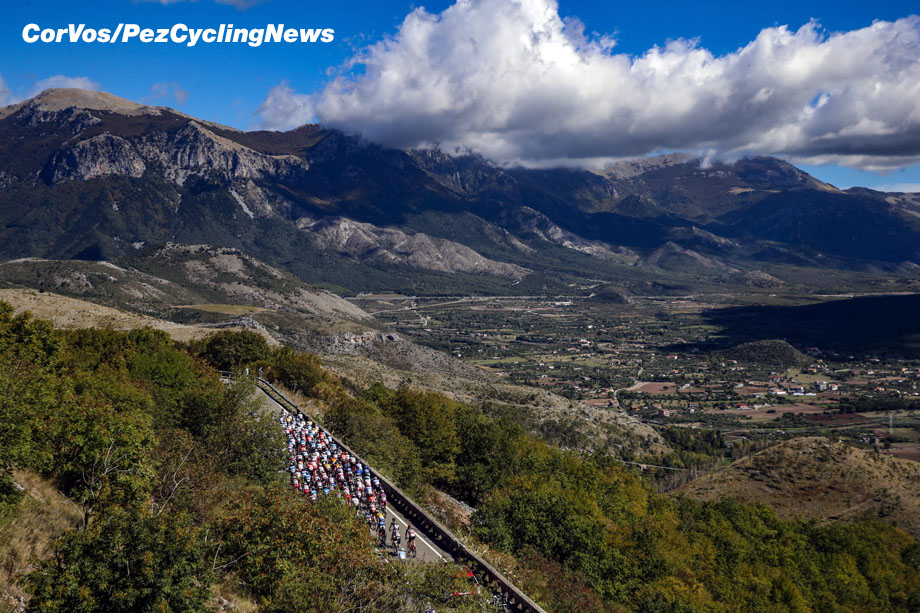 The break started to attack each other on the climb

On the Galleria Millotta, Whelan was the strongest and rode away from his three Italian companions. The Australian was first over the top for seven KOM points, with a lead of only half a minute. Thomas De Gendt took 2 mountain points ahead of the peloton. The brave Whelan tried to hold out as long as possible, but was finally caught 13 kilometres from the finish. Due to the adverse wind in the final, the peloton did not ride particularly fast. With 7 kilometres to go, Sunweb hit the front. They were working for Michael Matthews and to keep Wilco Kelderman safe. 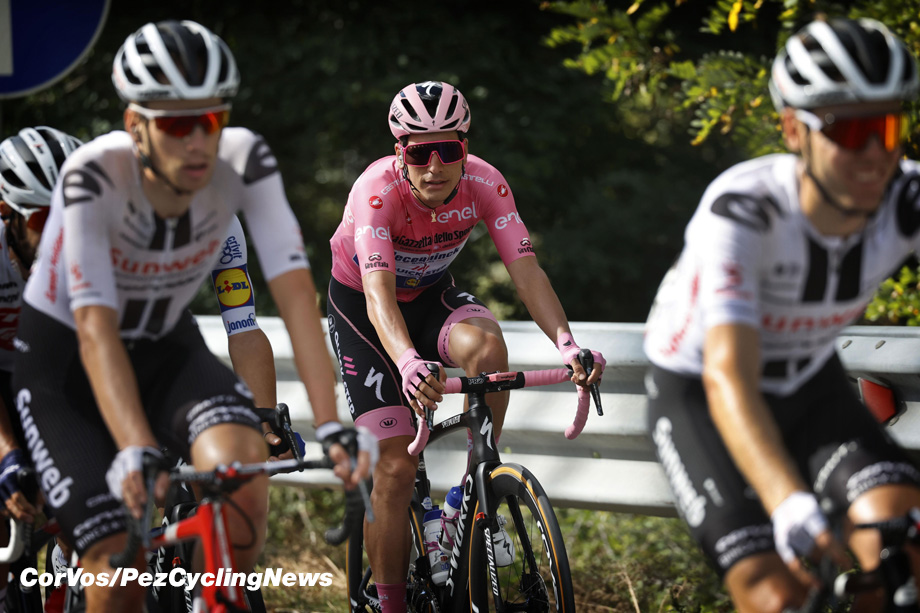 Almeida had crash at the side of the road with McNulty

Just under 3 kilometres from the finish, the riders were treated to the Via San Vito, a climb of 700 metres at more than 7%. Matteo Fabbro held a high pace for Sagan, but the Via San Vito did not cause any major problems. In the last kilometre there was still a large peloton and looking like a duel between Sagan, Démare and Matthews. 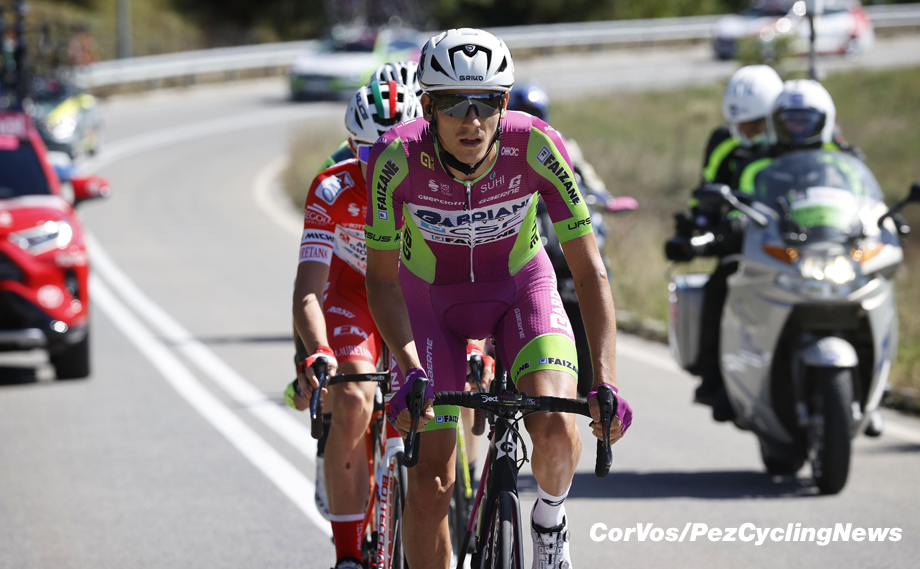 The break had 9 minutes at one point, but were all caught before 10 kilometres to go

Sagan, who had his team work a lot during the stage, was way too far back at the decisive moment. Démare was ideally placed and finished several bike lengths ahead of Matthews and Felline with an impressive sprint. Sagan had to settle for eighth place. No changes in the GC rankings: Almeida has the pink jersey for one more day. 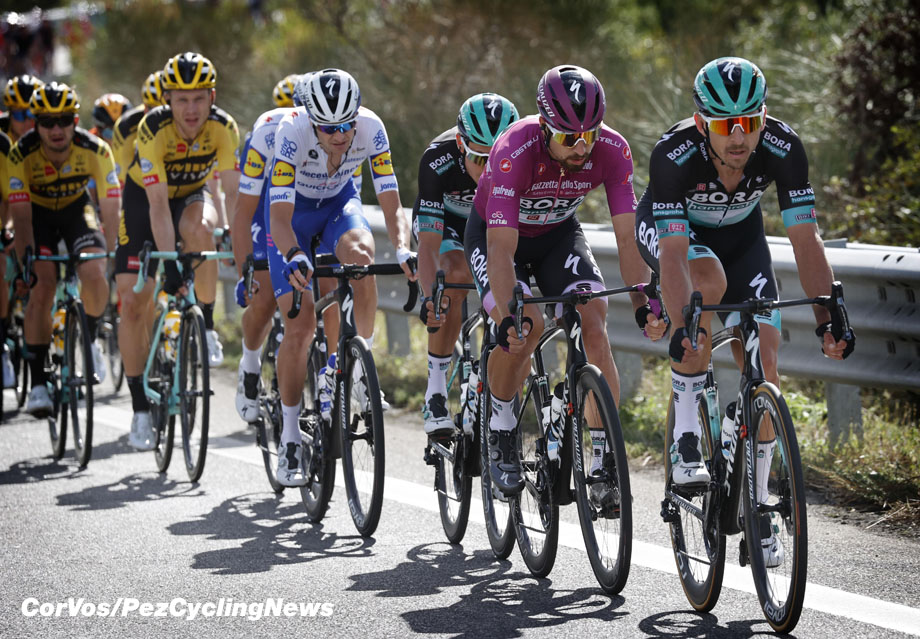 Peter Sagan was staying close to the front

Stage winner, Arnaud Démare (Groupama-FDJ): “Two days ago it wasn’t a perfect sprint but today it’s super! I wasn’t sure if I could overcome the climb but I found the best position when it flattened a bit. I said that the earlier I’d win a stage, the more stages I’d win in this Giro. This is pure pleasure!” 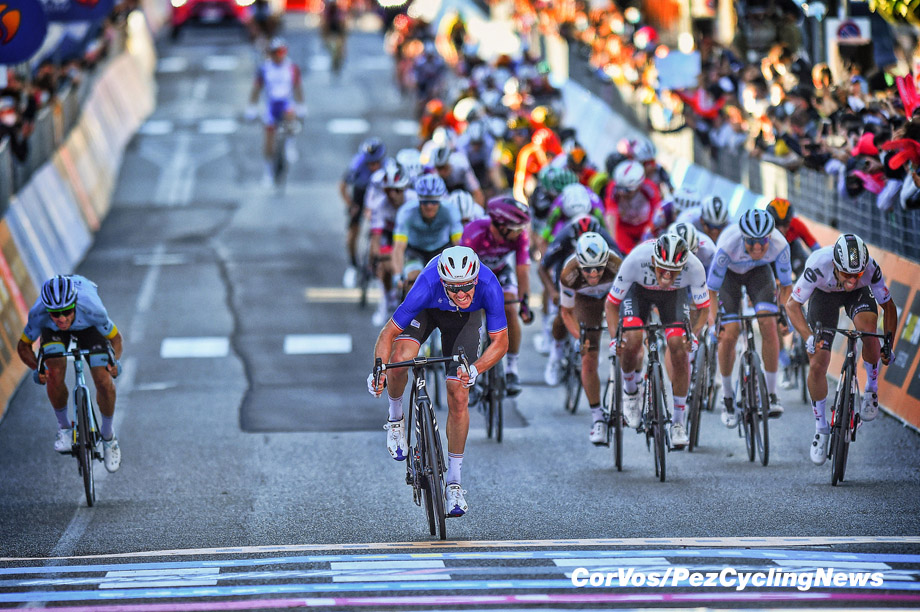 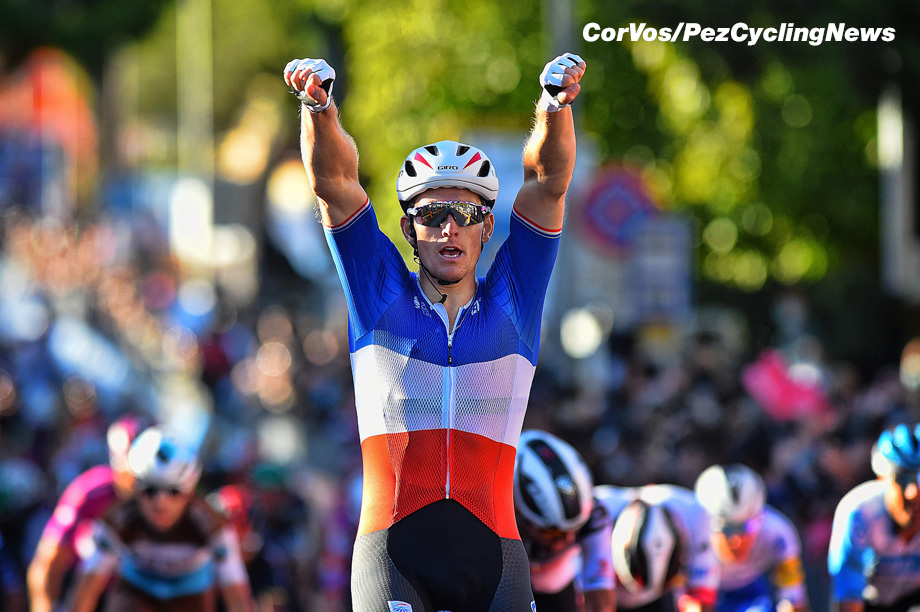 Maglia Rosa, João Almeida (Deceuninck – Quick-Step): “I rode in the front of the bunch in the last kms to avoid any crash and to lose seconds. It’s my fourth day in Maglia Rosa, unbelievable!”