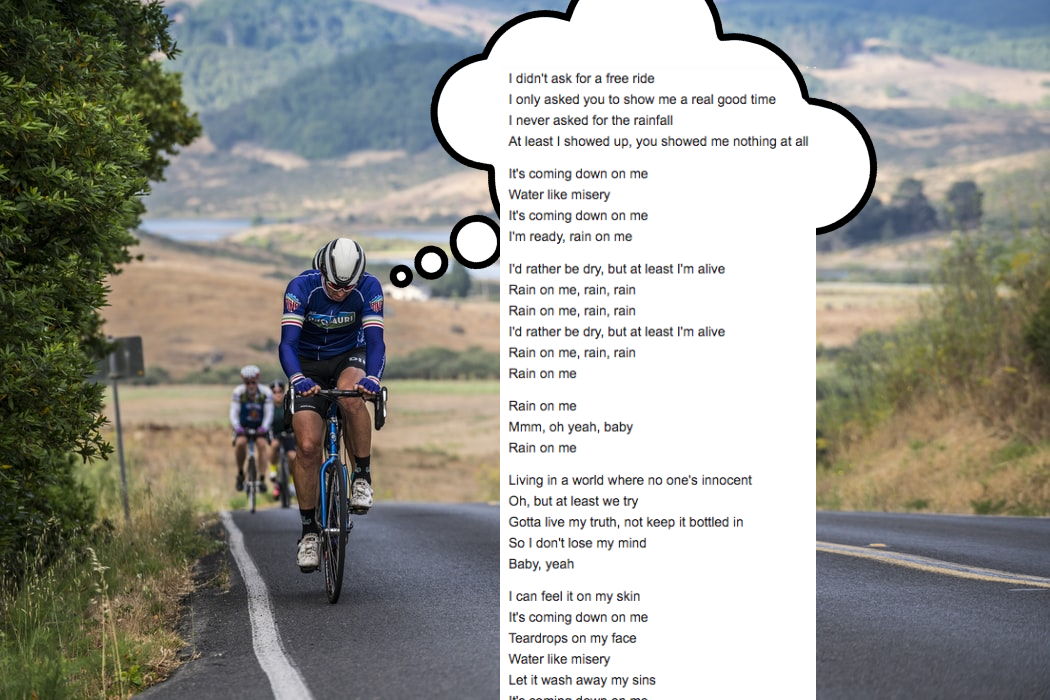 Long bike rides can do wonders for you mentally. There’s a meditative component to zooming along a country road—you take in the beauty of the countryside, smelling the fresh outdoor air as you cut through the wind and soak up some vitamin D.

Your mind wanders casually from here to there. Nothing particularly sticks as a topic of focus but you don’t have a responsibility to be thinking about anything other than road safety and maintaining (what you would consider) a reasonable pace, so you let your thoughts meander. You start to notice a particular song playing in the background of your mind but don’t pay much attention to it.

Maybe it’s an old classic or something from an album you’ve been playing or repeat. Maybe it’s even an ad jingle or a weird sound bite from a TikTok. Regardless, as your thoughts continue to flutter from place to place, the song plays consistently. You’re half an hour into a few lines of the chorus repeating over and over again in your brain and the quality of the ride is really starting to deteriorate.

How do you get this earworm out of your head?

Ironic process theory, or the white bear problem helps to explain what not to do when trying to get an earworm out of your head.

In Winter Notes on Summer Impressions, Dostoevsky famously said: “Try to pose for yourself this task: not to think of a polar bear, and you will see that the cursed thing will come to mind every minute.”

Deliberate attempts to suppress certain thoughts, in this case earworms, make them more likely to surface. Attempting to not think about a white bear, or a song, can result in the song becoming even more present in your mind. Try your best to relax and accept the music, as stressing about not thinking of the song can worsen the earworm.

RELATED: Is it safe to wear earphones while cycling?

Often, listening to the song itself will cure an earworm. Unfortunately that’s not always an option when you’re in the middle of a ride.

As an alternative, one study found that sometimes ‘cure tunes’ can be used as a kind of musical distraction, used to neutralize an earworm. The researchers, who were surveying Finnish and British participants, found that some songs were common ‘cure tunes’ among participants. “Happy Birthday to You,” “God Save the Queen”, “Sledgehammer” by Peter Gabriel, “Kashmir” by Led Zeppelin, and “Karma Chameleon” by Culture Club all came up repeatedly. The tunes are all songs that the listeners enjoyed or felt neutral about that were also catchy themselves.

Psychology research has repeatedly found that human brains are not great at multitasking. Fortunately, this can be used to your advantage if you’re trying to get that sticky song out of your head. Off the bike, things like completing a crossword puzzle, watching TV or reading will all be distracting enough to get your mind off the song.

On the bike, you’re more limited in terms of distracting activities. Try doing some mental calculations—figure out how many kilometres you have left on your ride and how long it will take you to get home going at various speeds.

Probably the best way to distract yourself on the bike is by doing a hard effort. Get that song out of your head and get in a bit of extra training stress, really it’s a win-win.