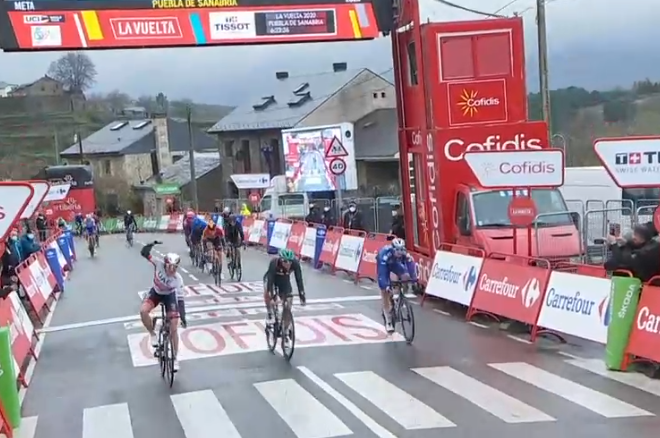 Jasper Philipsen (Belgium/UAE-Emirates) claimed one of the 2020 Vuelta a España’s few bunch sprints on Thursday’s taxing 15th stage. A long stage raced in difficult condition, Thursday is the last sprinter’s day until the race conclusion in Madrid on Sunday. Primož Roglič stayed safe in yellow, still with a 39-second lead on Richard Carapaz and 47-second gap over Hugh Carthy.

You can watch the Vuelta a España, the final act of the 2020 WorldTour, on FloBikes.

Thursday was more lumpy that Wednesday, with five Cat. 3 climbs distributed evenly along the 230.8 km. It was the longest stage of the 2020 Grand Tours. The wind was strong in places and rain dampened the proceedings. The day was very taxing.

A stage that has breakaway written all over it.#LaVuelta20 pic.twitter.com/WvN1CbpUJV

Sure enough, after several failed attempts in the first two hours, the profile drew a sizeable breakaway, with double stage winner Tim Wellens and KOM jersey holder Guillaume Martin among the 13 riders. Martin secured his place by taking maximum points atop Alto de San Amaro, Alto de Carcedo and Alto do Furriolo. Heading to the fourth categorized climb, Alto de Fumaces, the fugitives’ gap was only 2:30.

Atop Fumaces, Martin secured his blue polka-dot jersey, provided he reaches Madrid. Four different Frenchmen have now won seven of the last 13 mountain classifications. David Moncoutié took four in a row from 2008 to 2011.

With 60 km to go, the day was delicately balanced: the gap was 2:18 as everyone slogged along in the headwind.

The fugitives began to skirmish, and Deceuninck-Quick Step rider Mattia Cattaneo emerged solo going into the last 30 km. The rain was really tipping down.

Bora-Hansgrohe tugged along the soggy peloton. With 7 km remaining, the Vuelta organizers announced that GC times would be taken with 3 km to go, but the stage winner would still be decided on the finish line. Cattaneo was absorbed with 3.4 km remaining.

Having gone through the 3 km to go spot, many riders sat up and left it to the sprint squads. Philipsen got a good lead out from the Oliveira twins and went from far out to hold off Pascal Ackermann and Jannik Steimle (Deceuninck-Quick Step). The UAE-Emirates team was ecstatic.

Since the 75th edition is only 18 stages long, there are only three days left, with one summit finish, Saturday’s battle on Alto de la Covatilla, remaining. Sunday will be a procession into Madrid. Roglič’s rivals must try to dislodge him on Friday or Saturday. The final act of the Women’s WorldTour, the three-day 6th Ceratizit Madrid Challenge by La Vuelta, also takes place from Friday to Sunday.