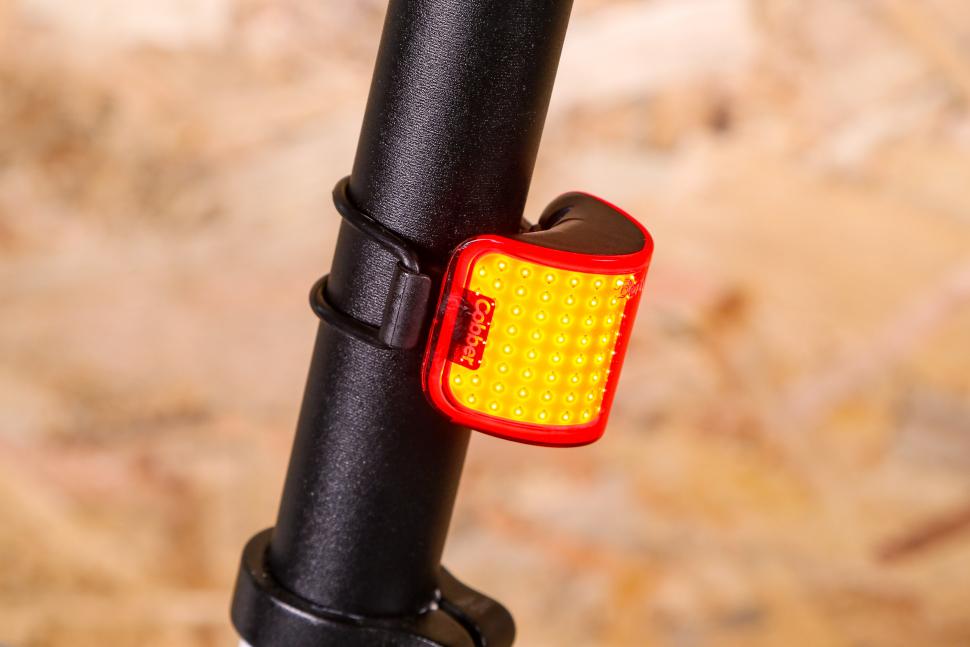 The Knog Lil’ Cobber has a cute, quirky exterior but behind it there’s a seriously good light that ensures excellent visibility, particularly from the side. It has a clever integrated USB plug for cable-free charging, and while it’s plugged into a computer you can customise its modes via Knog’s ModeMaker app. All this does make it more expensive than other lights with this lumen count, but if you’re after a commuter light with exceptional side visibility you might decide it’s worth it.

The Lil’ Cobber has a lot going on for such a small light. The most important thing – and obviously the whole raison d’être for a bike light – is visibility, and it does an exceptional job of that. Passing a junction whether during the day or at night is always a tense time for a cyclist, and with the Knog’s curved bank of miniature LEDs I felt able to relax more than with lights that point straight backwards.

I wouldn’t say it produces the 330 degrees of light that Knog claims – unless I missed something in trigonometry at school – but I would give it at least the 270 degrees that the Moon Cerberus claims.

Compared with the 150-lumen Cerberus, which uses a similar system of Chip on Board (COB) LEDs, the Lil’ Cobber is not as searingly bright with just 50 lumens, but on flash mode it looks far more than a third as bright.

The popular Exposure TraceR supplies a more intense beam with its single LED and 75-lumen output and would probably be a better choice for road riding in the countryside, where most traffic approaches from directly behind, but for city commuting with roundabouts, junctions and heavy traffic coming from all angles I would go with the Knog despite its lower power.

The Lil’ Cobber comes with five pre-programmed modes. If you download and install the ModeMaker app you can choose from 12 more and customise them all for flash speed using a slider. The only issue with this is that the default modes have their factory listed run-times, but once you start customising you have to go and find out run-times for yourself.

I slowed down the day flash mode to give it a bit more than the listed seven hours, but I was pretty happy with the five default modes otherwise, so didn’t find the ModeMaker app particularly useful.

> 6 tips for cycling at night

As I mentioned in the intro, you don’t need a cable to charge (or program) the Lil’ Cobber, it has its own USB plug that you stick straight into a USB port. However, it is possible to plug it in the wrong way round, and if you do that, the red ring around the switch won’t come on and it won’t charge. Unfortunately, the right way round in the back of my iMac turns it upside down so that I can’t actually see if the ring has turned green to indicate full charge, and have to hold a fingertip underneath to check.

The Lil’ Cobber comes with a mount for a round seatpost and one for a bladed seatpost, plus four rubber bands of different sizes. It takes a bit of practice to slide the light into the mount – again, there’s only one right way round – but once there it’s secure, with an extra magnet acting as the braces to the belt of the plastic clip system.

I’ve used the Knog on three-hour rides on bumpy lanes with some fast descents as well as for commuting and have found it stays perfectly in place. Really, it’s so lightweight at 22g that there’s no danger of it bouncing out.

Many lights are not easy to operate with gloved fingers, especially on the move, but if you set off having forgotten to switch on the Knog it’s easy to reach back and do it, thanks to a positive-feeling button that protrudes just enough.

IP67 waterproof rating (standard for modern phones, electronic devices and the like) is justified – it got a drenching on its first ride and has been left outside in rain on my commuter tandem and has always worked fine.

The default flash, which uses the full 50 lumens, was the one I used for solo daytime riding. Before I slowed down its frequency via the app to eke out a bit extra, I found I was getting about 6 of the claimed 7 hours out of it, but the ring around the switch would turn red to indicate low charge after 2.5 hours, meaning I would need to remember how many hours it had done unless I wanted to keep topping it up.

On full constant mode (claimed 1.4 hours, I got 1.3) the ring turned red after 25 minutes. This is the opposite of what Steve found with the Knog Big Cobber. In his case the ring would only turn red with 15 minutes of charge left.

The Knog Lil’ Cobber is expensive for its lumen count compared with other lights. The Giant Recon TL200 is a tenner cheaper for four times the lumens, while the Moon Cerberus is also £10 cheaper at 150 lumens.

The much-loved Exposure TraceR Mk1 comes in at the same price (for 75 lumens) but is made from metal rather than plastic.

However, the Lil’ Cobber is better than any of the above lights at being seen from side-on and more, thanks to the wraparound LEDs, so for ultimate commuting confidence you might be happy to pay slightly more.

> Buyer’s Guide: 18 of the best rear lights for cycling

In its description, Knog calls this a commuter bike light – in fact it claims the Lil’ Cobber is ‘the best commuter bike light of 2020’. That’s not an unreasonable claim, but to get full marks I would like more information from the battery indicator, more detail about custom run-times from the app, and I wish it wasn’t upside down when charging in the back of my iMac.

Literally brilliant for side visibility in a commuter environment; expensive because of clever but not always essential features

Tell us what the light is for, and who it’s aimed at. What do the manufacturers say about it? How does that compare to your own feelings about it?

Lil’ Cobber Rear produces an incredible 330° of light, so you’ll be clearly seen from all angles. It’s brilliantly effective at attracting attention day and night, so if you’re after the best commuter bike light of 2020 look no further.

Lil’ Cobber Rear is super simple to operate. A long press of the single button will turn the light on and off, and a short press will cycle through the modes. Cobber is 100% waterproof with an IP67 rating, and has a run time of up 40 hours.

Packing 50 lumens, Lil’ Cobber Rear is seriously bright. Efficient Chip on Board (COB) LEDs provide maximum brightness level for up to 90% of the battery burn time. Lil’ Cobber Rear comes pre-programmed with 5 modes, plus it’s compatible with our ModeMaker app so you can customise your light modes.

Cobber comes with a tool-less removable silicone straps for bars and seat posts 22 – 32mm+ diameter and a magnetic mount. A large strap is also provided that will fit tubes and head tube profiles with a circumference of up to 200mm. Cobber comes with a standard and Aero mount.

No charging cable is required for your Cobber, its integrated USB plugs directly into USB ports. It has a charge time of 4 hours. When your Cobber is running low on battery, a red ring will light up around the button. This ring will turn green and then turn off once the Cobber is fully charged and ready to go.

Tell us some more about the technical aspects of the light?

Rate the light for quality of construction:

Rate the light for design and ease of use. How simple was the light to use?

The light was very easy to use while out riding, but the battery light indicator could be improved.

Worked very well. A bit fiddly at first but no problem once you’ve got the hang of it, and perfectly secure on the bike.

Rate the light for waterproofing. How did it stand up to the elements?

No complaints in this area.

I would have to give it ‘average’ for battery life and recharging. The battery is obviously small so will store hours of charge, and four hours to charge is not the quickest.

Rate the light for performance:

Rate the light for durability:

Still looking good after a month of nasty conditions.

Rate the light for weight:

Rate the light for value:

It’s expensive for a small, 50-lumen light, but if you want a very visible commuter light that’s very lightweight, it could be worth it.

As a commuter light, doing its job of keeping you visible in traffic, it performed exceptionally well.

Tell us what you particularly liked about the light

Tell us what you particularly disliked about the light

I wasn’t keen on the integrated USB plug because it turned the Knog upside-down when it was charging in the back of my iMac; I wanted the battery life indicator to give me a bit more information and I wanted some details about run-times for customised modes from the app.

How does the price compare to that of similar products in the market, including ones recently tested on road.cc?

The Giant Recon TL200 is £10 cheaper for four times the lumen count, while the Moon Cerberus is also £10 cheaper at 150 lumens.

The Exposure TraceR Mk1 costs the same (for 75 lumens) but is made from metal rather than plastic.

Did you enjoy using the light? Yes

Would you consider buying the light? Yes

Would you recommend the light to a friend? Yes

As a commuter light, it’s hard to fault the Knog Lil’ Cobber. The side visibility is exceptional, and that’s what you need for commuting. However, the app – which doesn’t add much – no doubt pushes the price up, the battery indicator light lacks accuracy and the cable-free charging isn’t practical for all computers.

I’ve been riding for: Over 20 years  I ride: Most days  I would class myself as: Expert

I regularly do the following types of riding: time trialling, commuting, touring, club rides, sportives, School run on a tandem