Stage Report: The first day of the final week was not one for the GC men as the break of the day went all the way to the finish as Lennard Kämna (BORA-hansgrohe) soloed to the line a minute and a half ahead of 2019 Giro d’Italia winner, Richard Carapaz (INEOS Grenadiers). The GC men finished together, although Nairo Quintana (Arkea Samsic) lost a little time. Egan Bernal (INEOS Grenadiers) lost a lot. 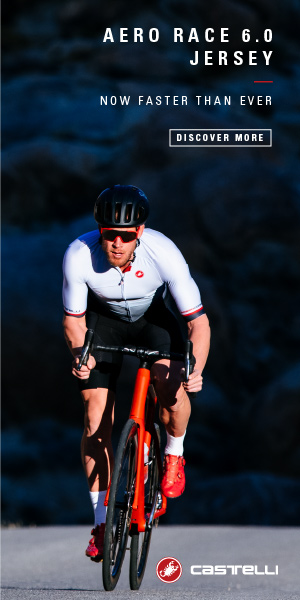 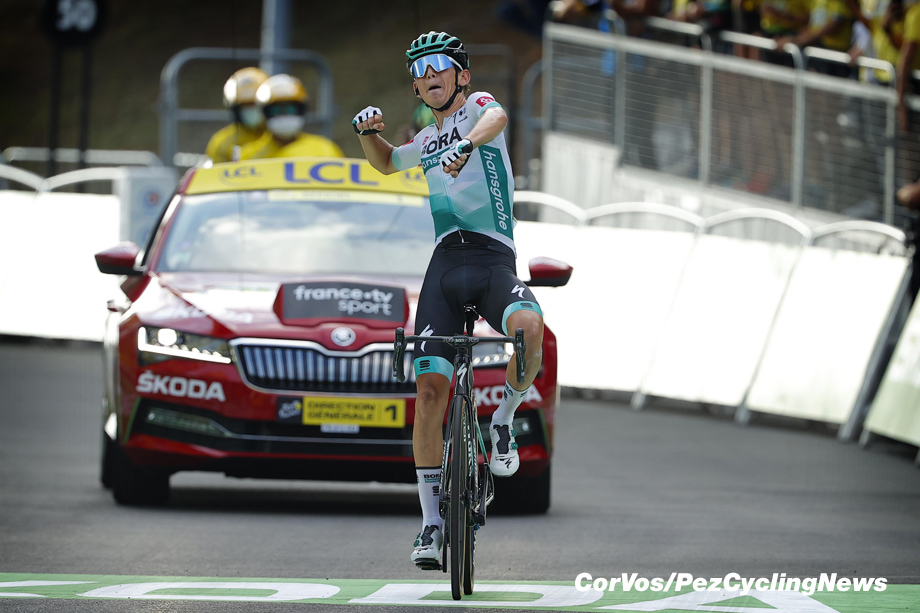 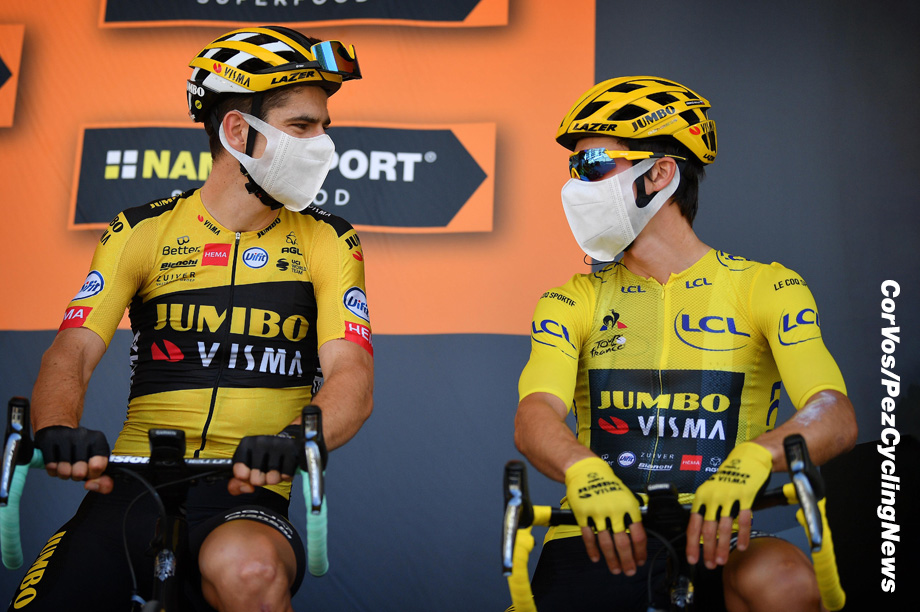 Van Aert and Roglič ready for the final week

Stage 16 Route:
A.S.O. describes the stage: “Following a well-deserved rest day in the Isère department, the area of La Chartreuse might as well inspire escape artists but not everyone will be allowed to break away ahead of the col de Porte. Richie Porte said he’d love to but he’s too high on GC and showed his form on the up as he came third atop the Grand Colombier on Sunday. Jumbo-Visma wouldn’t let him go so far away (66.5km) from the finish at Villard-de-Lans. The mountains of the Vercors, well known for the battles of the Resistance during WW2, also offer the ingredients of a tricky stage but it’s probably a terrain for baroudeurs, riders like Julian Alaphilippe who are far down overall, rather than an opportunity to shake up the GC. It’s the day before the queen stage.” 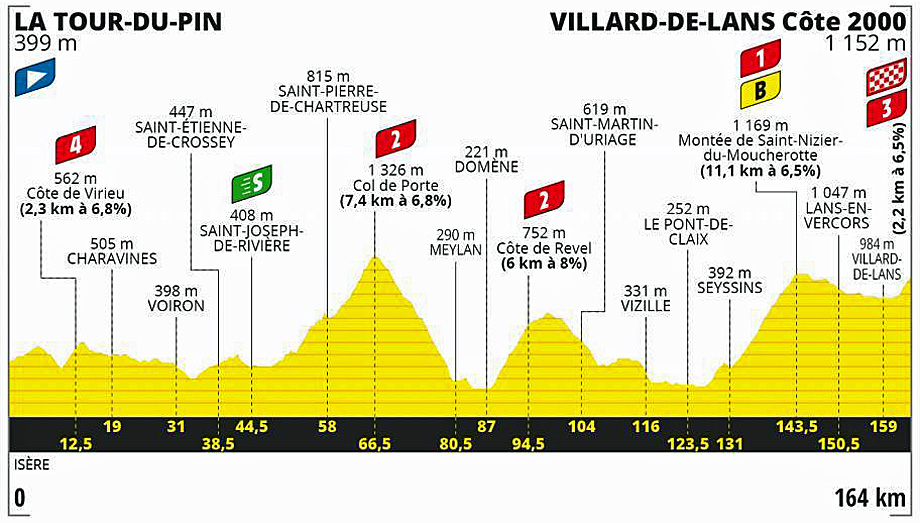 After his ‘jour sans’ on the Grand Colombier, Egan Bernal has no chance a second consecutive Tour victory, giving his INEOS Grenadiers teammates the freedom to hunt for the stage victory. The first attack came from Dylan van Baarle, but the Dutchman was clearly not the only rider with ambitions. After 7 kilometres, more than thirty riders managed to escape the peloton. A big break before the Côte de Virieu, the first climb of the day. With Esteban Chaves, Thibaut Pinot, Richard Carapaz, Maximilian Schachmann, Lennard Kämna, Marc Hirschi, Jesús Herrada, Alexey Lutsenko, Nans Peters, Alberto Bettiol and Greg Van Avermaet there were plenty of good riders. 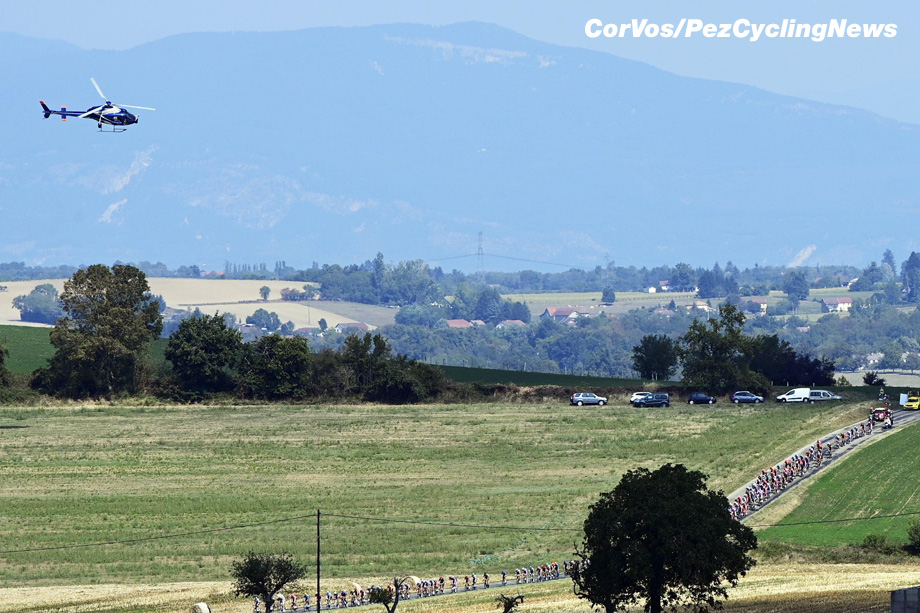 The top men will want an easy day, but with five climbs and a summit finish, that won’t be possible

The leading group of about 35 men, with stage winners such as Peters, Hirschi, Alaphilippe, Lutsenko and Søren Kragh Andersen, was 30 seconds ahead of the peloton on the first climb. In the chasing group, Peter Sagan had a teammate to ride on the front to keep the pace high. The Slovak was committed to taking the full advantage of the intermediate sprint, but he was already shadowed on the climb by his rival Sam Bennett. 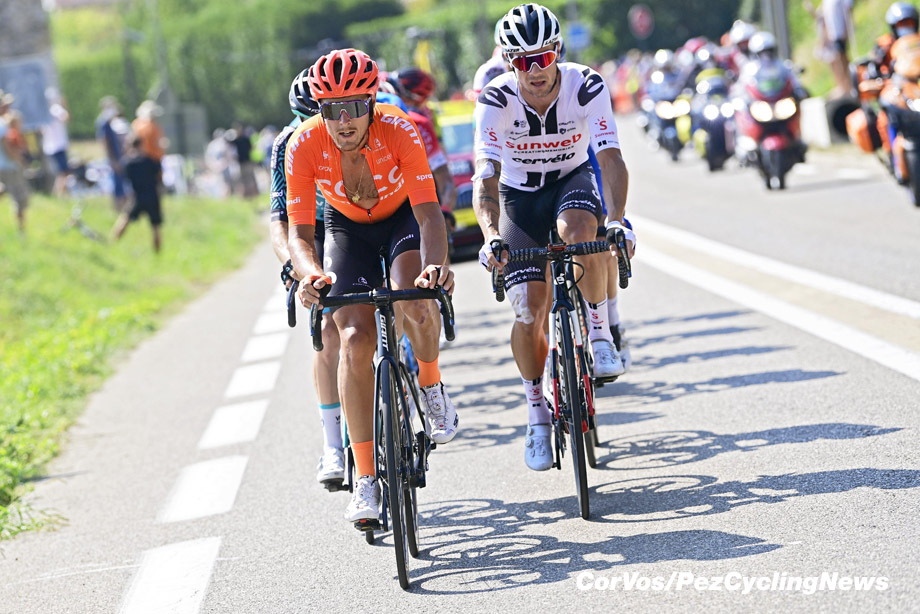 A day for a long break 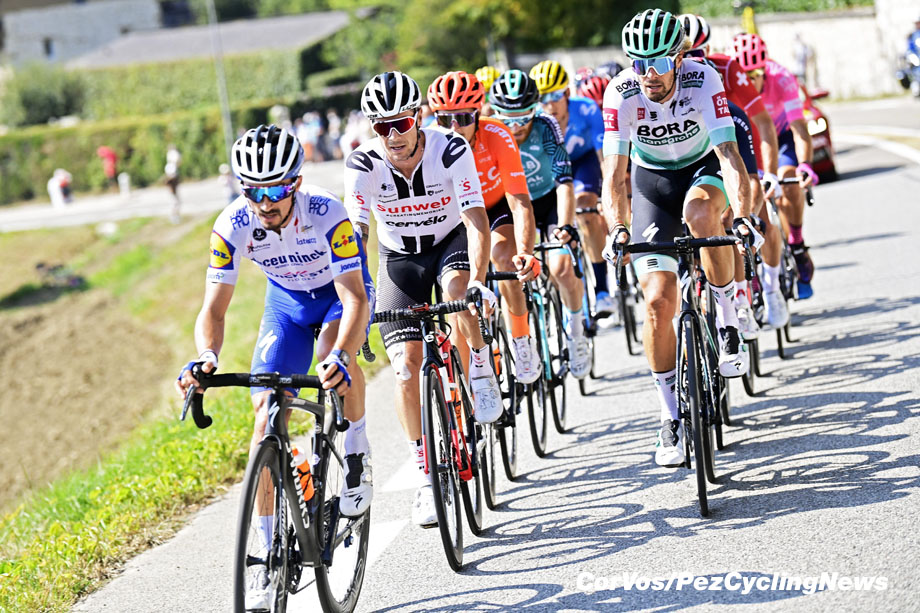 This group seemed to be allowed more freedom from the peloton, as the difference increased to a minute and a half, but not any more on the run-up to the Col de Porte. Several riders tried to cross, but failed and were caught again by the men of Jumbo-Visma. The front group had reached the intermediate sprint in Saint-Joseph-de-Rivière, where Matteo Trentin won again. The Italian was able to add 20 points to his total. The large leading group was now allowed to go as the leaders decided to take a bathroom break. 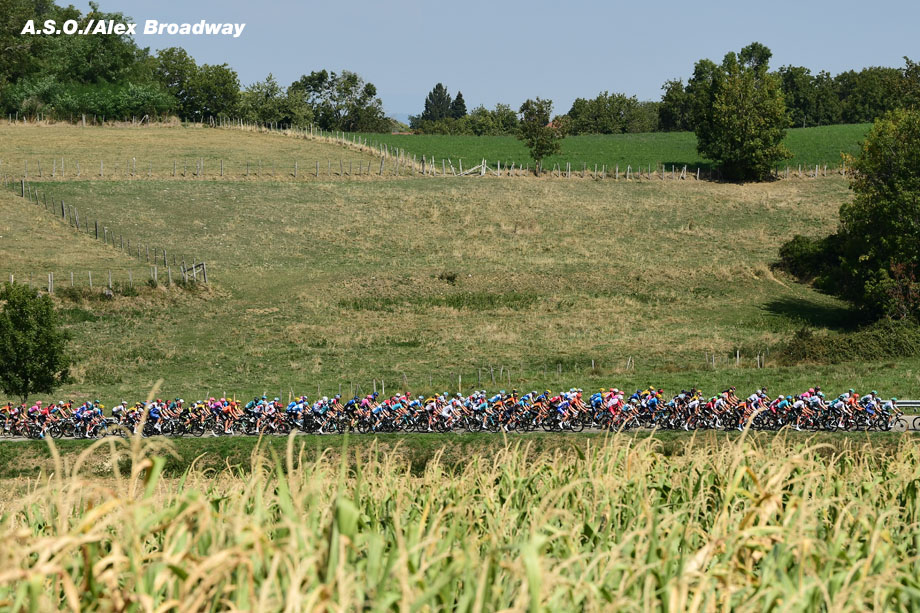 There were still several riders who tried to make the crossing to the leading group. Sunweb’s Tiesj Benoot and Casper Pedersen, together with Pierre Rolland, managed to close the gap on the Col de Porte. And on the subsequent ascent of the Côte de Revel, the escapees were joined by Pavel Sivakov, Mikel Nieve, Neilson Powless, Simon Geschke and Romain Sicard. Benoît Cosnefroy was absent from the front and would not be collecting any points for his mountain jersey. Rolland was able to join the leading group just in time, to grab 5 KOM points at the top of the Col de Porte. The climber of B&B Hotels-Vital Concept also took 5 more points on the Côte de Revel. 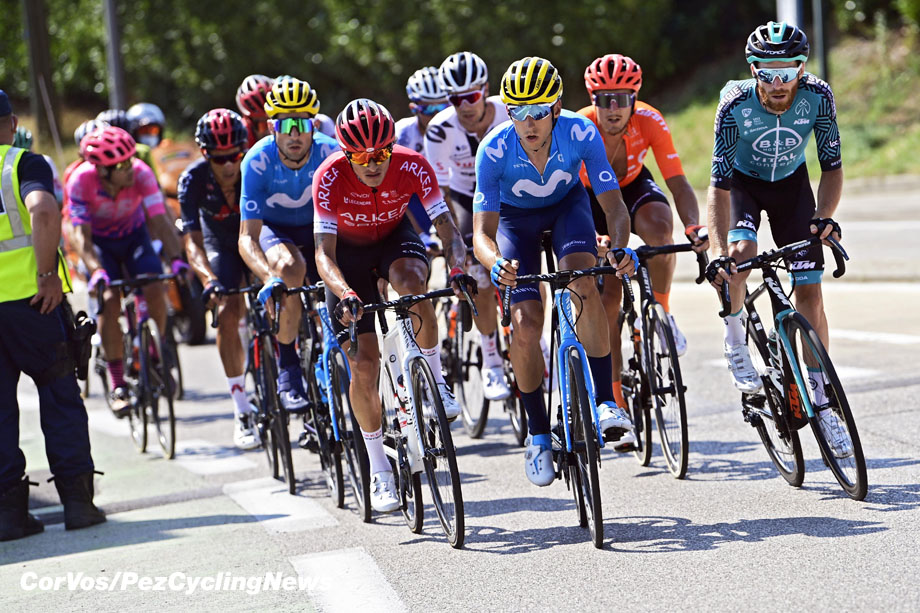 Would they go all the way?

Rolland raised his points total to 36, which put him on the same level as Cosnefroy, but he had to take an extra point from somewhere to wear the polka dot jersey. The peloton, led by Gesink and Tony Martin, was already at 12 minutes. On the 11 kilometre climb of La Montée de Saint-Nizier-du-Moucherotte (6.5%), the battle for the stage victory was set, although Pacher tried to anticipate the action before the foot of the Alpencol. The Frenchman from B&B Hotels-Vital Concept took off more than 30 kilometres from the finish line, and managed to build a lead of 30 seconds at La Montée de Saint-Nizier-du-Moucherotte. 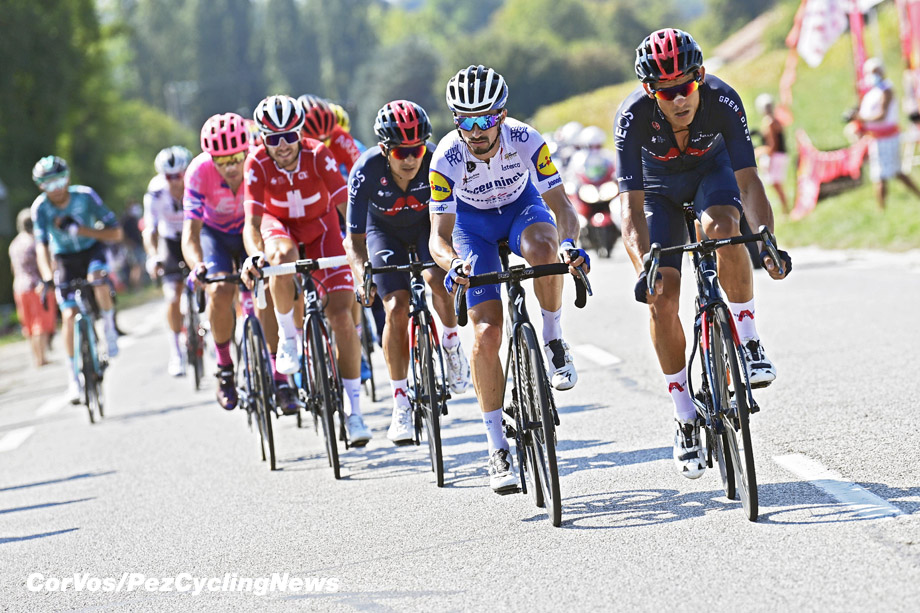 Over twenty riders made up the break

In the chasing group, the pace was increased by Amador and Pedersen, for Carapaz and Benoot. Pacher still had a half-minute lead, but at 6 kilometres from the top we saw an acceleration from the better climbers in the chase group. A kilometre further, Pacher was caught by Carapaz, Bernal, Reichenbach and Kämna. 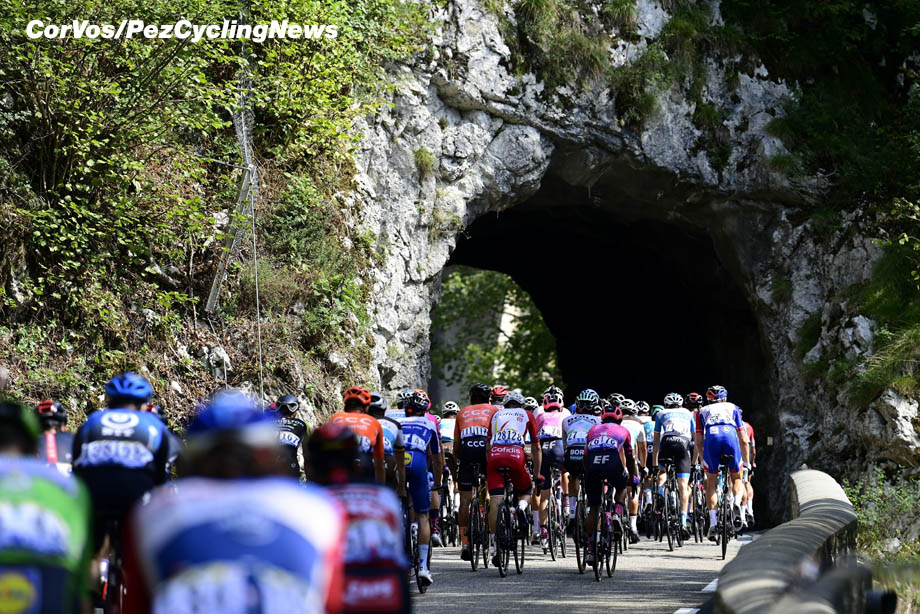 The peloton was taking the sights

These turned out to be the strongest climbers on the final to Villard-de-Lans, as a chasing group with Benoot, Roche, Geschke, Sivakov and Barguil were at 30 seconds. At the front we saw an all-or-nothing attempt by Carapaz. The Ecuadorian’s acceleration was powerful, Kämna and Reichenbach struggled to keep with his pace, but Alaphilippe was able to answer Carapaz’s attack. 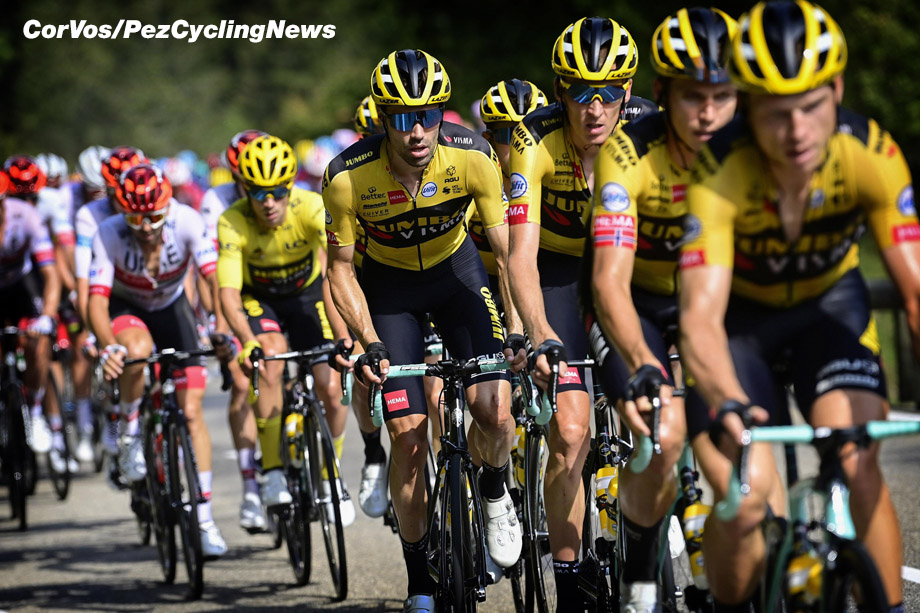 The front of the peloton was yellow

This was not for long, as the Giro winner kept the pressure on and Alaphilippe cracked. The Frenchman blew completely and had to let the three go. Carapaz felt his moment had come and tried to drop Reichenbach and Kämna with another attack. The Swiss rider couldn’t go with the move, but the young German managed to follow and then rode away from Carapaz just before the top. 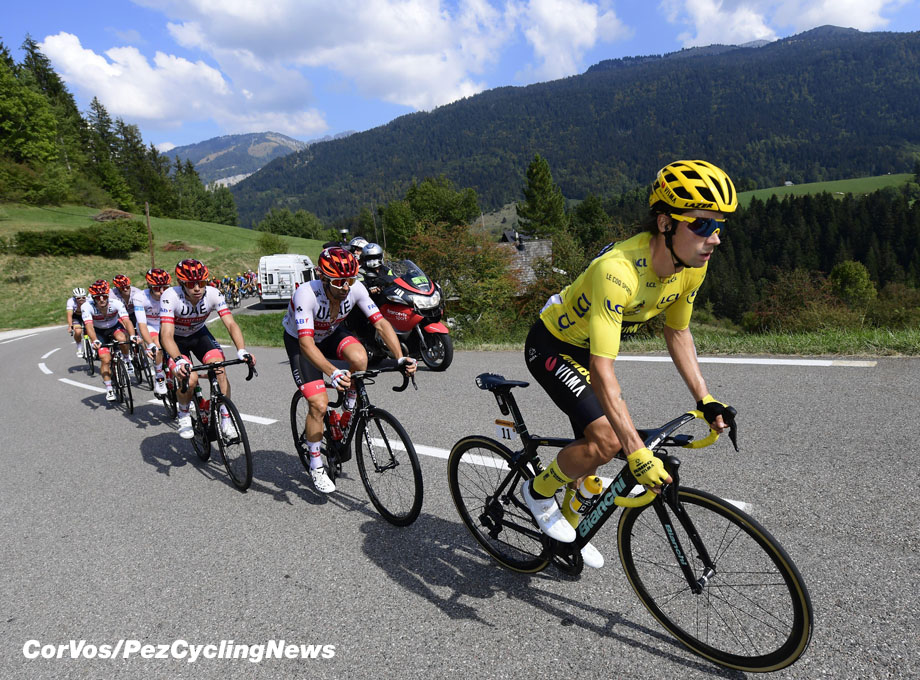 Roglič was followed by the UAE team

Kämna had 20, relatively flat, kilometres towards the final climb to Villard-de-Lans. Carapaz did everything possible to catch Kämna, but had to give up more and more ground. The INEOS Grenadiers rider started one minute behind on the Côte 2000 (2.2km at 6.5%) and that turned out to be too much to close. 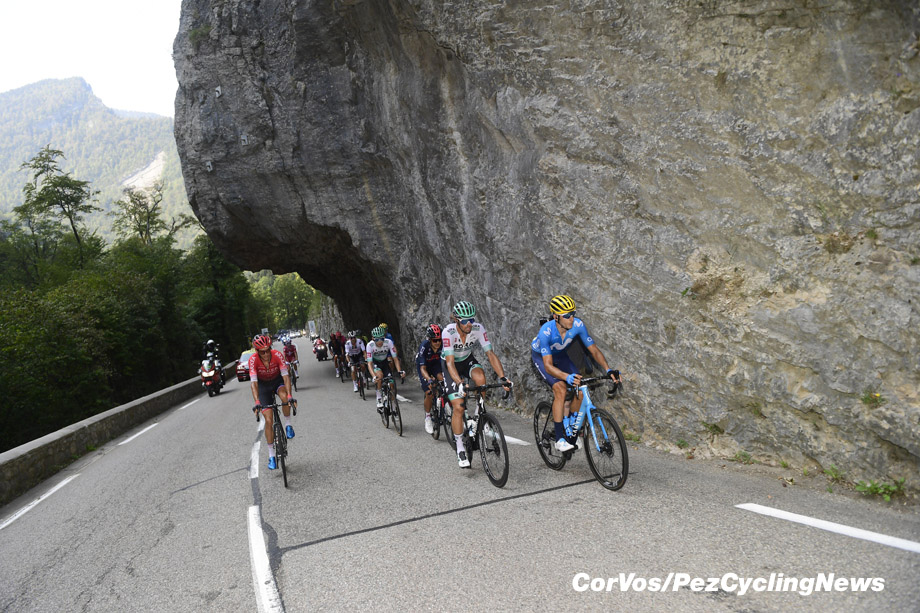 The break started to fall apart

Kämna suffered on his way to the finish, but was certain of his first victory in the Tour de France. The young rider won a mountain stage in the Critérium du Dauphiné in the run-up to the Tour. Carapaz finished second after a hard ride, Reichenbach managed to give Groupama-FDJ its first podium place. 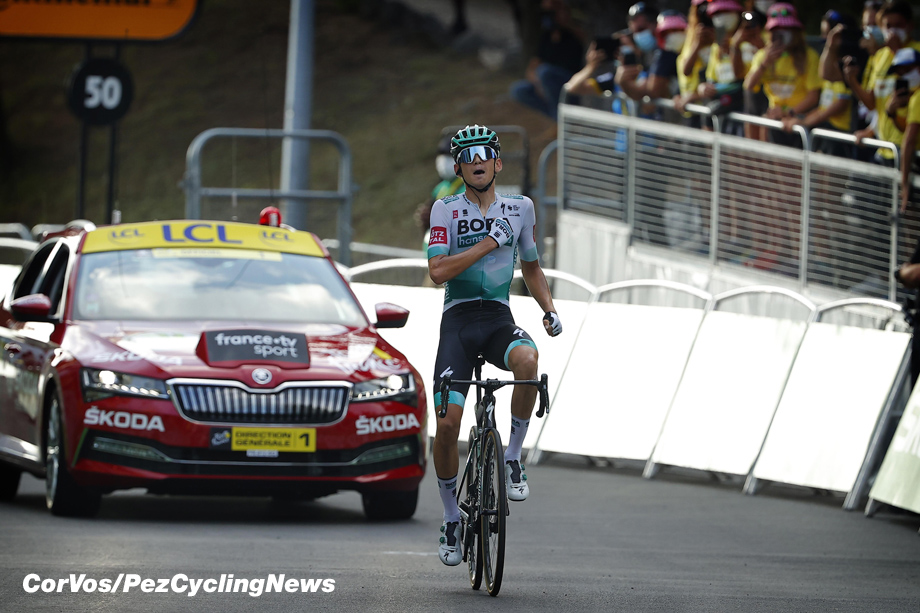 In the peloton, Cofidis had a plan for leader Guillaume Martin. The French climber accelerated at the foot of the climb with his teammate Nicolas Edet. By this point Bernal had been dropped before La Montée de Saint-Nizier-du-Moucherotte with sprinters Sam Bennet and Caleb Ewan. 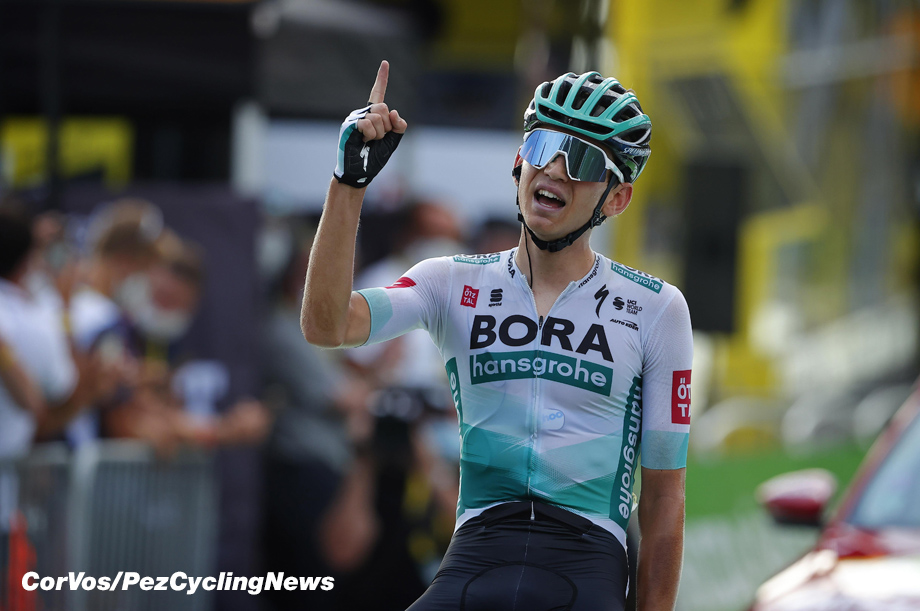 Martin’s attempt failed, as Jumbo-Visma decided to increase the pace with a very strong Gesink doing most of the work. The favourites for the overall decided to wait for the final climb of more than two kilometres. Tadej Pogačar signaled to his teammate David De la Cruz to increase the pace, but it was Wout van Aert who managed to take over the command for Primoz Roglic.

At 400 metres from the top, Pogačar attacked, but the UAE Emirates leader did not have that sharp jump this time. The winner on the Grand Colombier was then unable to counter an attack by Miguel Ángel López, but managed to fight his way back to the wheel of the Colombian.

The GC men crossed the finish line together, although Nairo Quintana lost time again. As a result, Tom Dumoulin gained a place on the general classification. The Jumbo-Visma rider is now ninth, Quintana drops to tenth. 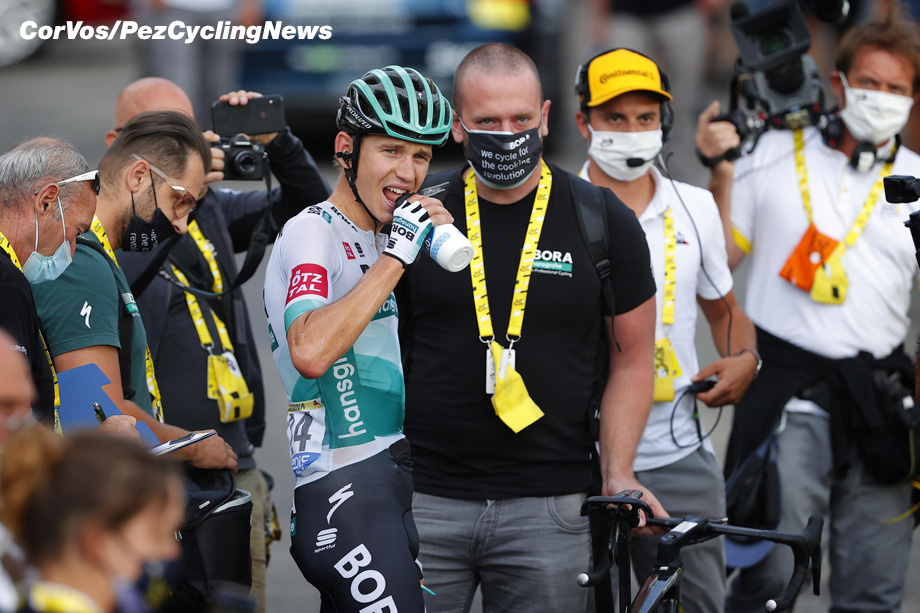 A long wait for the yellow jersey group

Stage winner, Lennard Kämna (BORA-hansgrohe): “I’m feeling great. It has been an absolutely awesome day for me out there. I knew I had to make it to the finish alone in order to win. On the climb, I saw Carapaz was losing speed after his attacks and I understood it was my moment to have a go. This victory is a big relief for the team. As for me, I couldn’t imagine I was able to pull out a victory like this one.”

Overall leader, Primož Roglič (Jumbo-Visma): “It was a good day for us, again in yellow. The start of the stage was very fast and we had to keep our focus on [so the race didn’t get out of control]. There are some big days to come. The team is doing a really good job so far, so we are ready and looking forward to the final days of the Tour de France. Tomorrow is this year’s queen stage. The final climb is the highest point of the route, and its last kilometres are very hard ones, as we have to ride a steep bike path. We’ve reckoned the climb – and I’ve also gone to the other side, the ski jumping hills in Courchevel. With 15 days on the legs, the terrain doesn’t matter that much. Flat, uphill – it’s the same. It’s about having the legs, and I hope to have them and do well tomorrow.”