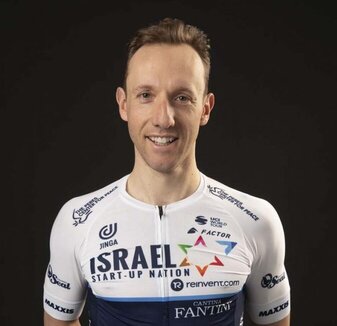 The Course
Stage 1 was a lumpy, 186.6-km affair ending with a triple ascent of Col de Gourdon, 10 km of 4.4 percent, the final kilometre closer to 7 percent.

A breakaway comprised of Pro Team and Continental Team riders tore loose early in the day to roll up a 6:00 lead, and Tom Wirtgen of Dutch outfit Bingoal-Wallonie Bruxelles was first over the line in the two intermediate sprints.

Inside the 100km to go mark a group of five riders has several minutes advantage over the peloton, where all our riders are in.
⛰️Col de Gourdon is already waiting.

The escapees kept their lead on the first passage of the Gourdon, Otto Vergaerde of Alpecin-Fenix tipping over in the lead. Vergaerde then went solo, but the peloton swept up all before the second passage where Woods’ teammate Krists Neilands scooped up the maximum KOM points.

Mollema had the best legs in the finale, with Greg van Avermaet doing his new AG2R-Citroën squad proud with second place. Groupama-FDJ packed the top-10 with four riders including Thibaut Pinot in ninth. Woods and Pinot were part of a 24-strong group that finished 3 seconds in arrears of Mollema.

After the stage Woods said, “It was a good day… just difficult to know where your legs are going to be at…got a bit boxed in on the sprint unfortunately.”

”I’m happy with my legs and I think tomorrow will be better for me!”

Saturday’s second stage isn’t quite as taxing as Friday’s, but it ends with a short, steep climb to the finish.