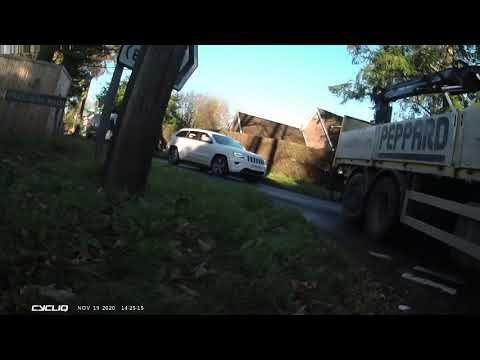 Today’s breath-taking near miss sees the driver of a builder’s merchants lorry cutting the corner when turning into a side road and almost flattening a cyclist in the process. The manoeuvre itself is only half the story however.

The incident occurred on Thursday on Stoke Road in Sonning Common, at the junction with Gravel Hill.

Secret_squirrel writes: “I had some new kit arrive – ironically a fluoro gilet – and an hour to kill so I thought I would take it for a test ride. Turns out all the fluoro or lights in the world means nothing if the driver doesn’t look or has some very iffy looking wing mirrors.”

Secret_squirrel said that even after he stopped and shouted, the driver continued, forcing him to get out of the way.

“When I challenged him on his driving, he replied that his view had been blocked by the silver deflectors on his wing mirrors, and that he had to turn quickly as the oncoming traffic tended to be fast.

“After exchanging a few more words, he left without leaving any contact details.”

Secret_squirrel has submitted the footage to Thames Valley Police and also to the business in question. He was told that the firm would investigate which driver was involved and get back to him.

“The white 4×4 driver was really nice,” he added, “as was a lady from a nearby house who offered me a cup of tea.”