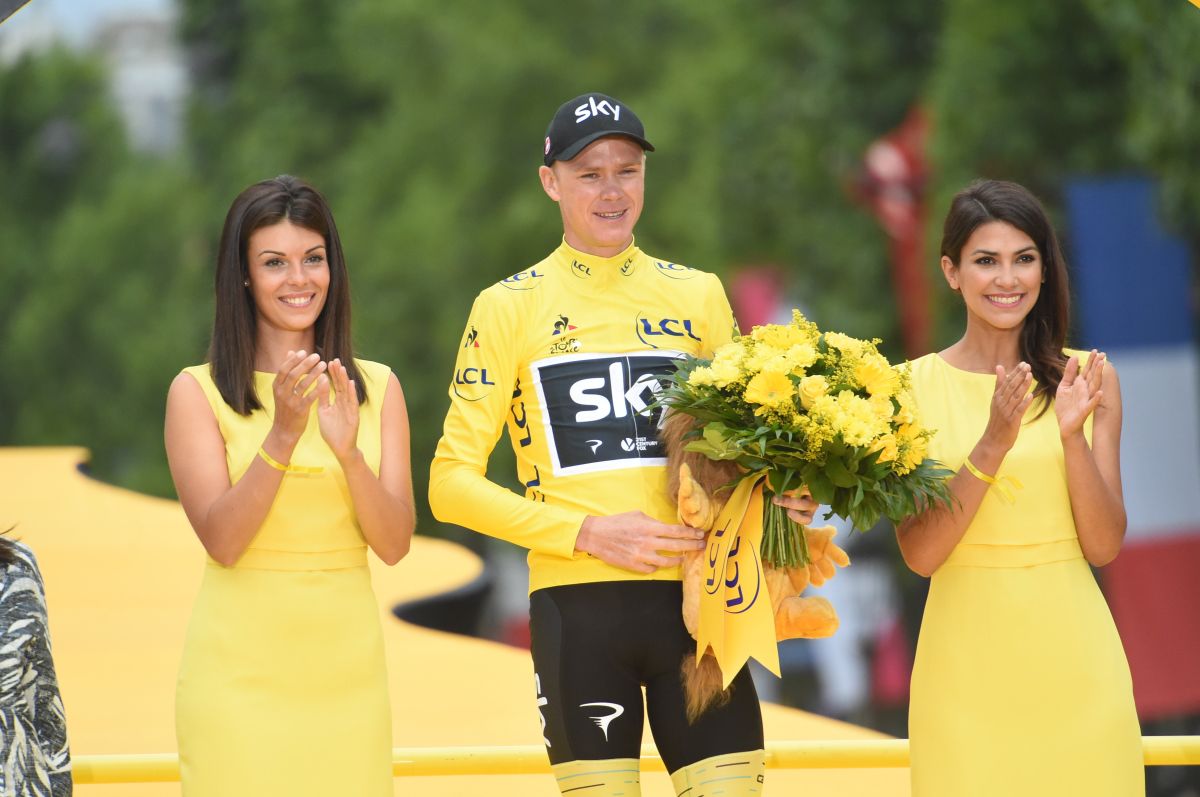 Yesterday, Tour de France organizer ASO announced it will no longer feature podium girls at the event. Podium girls, formally known as “tour hostesses” or “hôtesses du Tour”, were women paid to present prizes and kisses to the winners of the Tour de France. They also had responsibilities such as entertaining clients of the sponsors before and after the race. Many other races also have podium girls, although the tradition has been criticized and deemed ‘sexist’ by many.

In 2013 Peter Sagan groped one of the Tour of Flanders podium girls. He faced no official consequences.

Yesterday, while discussing the new pandemic safety protocols of the Tour de France with French broadcaster Europe 1, race director Christian Prudhomme said:  “You used to see the champion surrounded by two hostesses, with five elected officials on one side and five representatives of the partners on the other.”

“Now, it will be different, with only one elected official and one representative of the partner of the yellow jersey, as well as a hostess and a host for the first time. Yes, it’s new but we have already been doing it in other races for 20 years, like in Liege-Bastogne-Liege,” he said.

Prudhomme preemptively justified the decision to eliminate podium girls from the Tour, predicting some backlash from fans. Unsurprisingly some took to the internet to voice their displeasure, but many fans were happy to hear there would no longer be tour hostesses.

The move was not unexpected—numerous races in cycling and other sports have moved away from the ‘podium girls’ ceremony format in recent years.

In 2018 it looked like the Tour de France would follow the Vuelta a España in scrapping the podium girl tradition, but, as always, the podium girls were there at the end of the first stage. In 2019, 38,000 people signed a petition calling for an end to the practice, stating that “women are not objects nor rewards”. The Tour continued on with the custom.

This year, the Tour de France, the biggest race in cycling—an event steeped in tradition and history—was postponed for the first time since World War II. There was a moment in the middle of the global lockdown when many questioned whether the race would even take place in 2020.

The rescheduled version of the Tour, and all the other races taking place in this jam-packed season, is different from any years before. The crowds will be thin, riders will stick to team bubbles, COVID-19 tests and masks are required and podium ceremonies have been re-imagined.

It took a pandemic for the Tour de France to finally take a step back and question the necessity of the podium tradition that was frustrating some viewers and alienating many potential cycling fans. Switching to a host and hostess seems like a menial change compared to the rest of the new protocols and ASO doesn’t deserve much praise for finally letting go of a tradition it clung to for far too long (note: ASO still hasn’t announced if the Giro D’Italia will have podium girls).

What’s important though, is that when the entire structure of the race was thrown into the air, tradition went with it. As race organizers and cyclists pickup the pieces and select what is necessary for cycling in the COVID-19-era, they’ve been presented with a unique opportunity to rebuild the sport in a more equitable and non-sexist way.

We’ve already started to see some positive changes come from a reshuffled world. The revised UCI women’s WoldTour calendar included an unexpected first: A women’s Paris-Roubaix. Zwift racing blew up this year and, during the Virtual Tour de France, not only did the women’s race have identical stages to the men’s race, it also received equal broadcast coverage.

As expected, it’s not all been good—podium girls may be done but women still only get a one day race at the Tour de France. Important races such as the Ladies Tour of Norway and the Postnord Vårgårda West Sweden time trial and road race have been cancelled.

As COVID cases in France begin to rise again and experts warn of a second wave, the future of pro cycling in the next few years is unclear. Things may once again be reshuffled, cancelled and revised. One thing that is clear is the importance of this critical moment in which ‘the way things have always been’ no long carries the weight it once did. It would do some good for organizers at all levels of the cycling community to look to the (reluctant) example of ASO and figure out how, as we rebuild, the sport can be made more accessible and inclusive for spectators and racers alike.