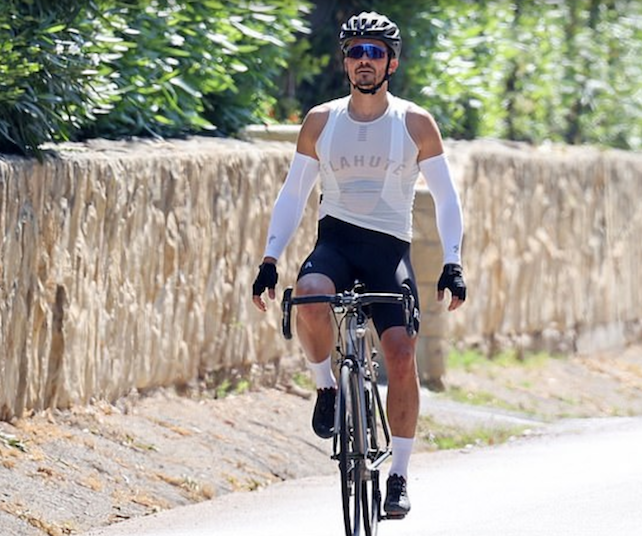 Orlando Bloom has gotten quite into cycling the past few years. The Lord of the Rings actor owns multiple Festka bikes and frequently posts on Instagram about his rides. Before the pandemic, Bloom was living in Prague filming the Amazon series Carnival Row, where he was often photographed cycling in kit from brands such as Rapha and Cafe du Cycliste.

The actor has returned to his home in Malibu and was pictured riding one of his Festka bikes this week. He wore Specialized arm warmers, gloves, a Rapha base layer and bibs, but notably, no jersey. Twitter user Felix Lowe posted a photo of the experimental style, captioned simply “It’s great that Orlando Bloom is cycling, but…”

It’s great that Orlando Bloom is cycling, but… 😳 pic.twitter.com/Mt6jgIzaSw

Initially some cyclists reacted with disappointment and confusion.

Call the fashion police and give him Some cycling kit 101

So much wrong in a single picture.

This is why there are rules

But pretty quickly the cycling community decided that, despite the fact that Bloom was wearing a base layer over his bibs and chose to opt out of the confines of a jersey, he (and any other cyclists) shouldn’t be mocked for the way he chose to dress.

Is he one of the unsure if cyclist or triathlete. But hey he’s out riding his bike and having fun so – keep going!!

If you’re on a bike, you’re doing it right.

Who cares what he’s wearing? He’s out under his own steam
Cycling Twitter needs to drop the snark https://t.co/onjLbmJkHx

In the end, the original author of the tweet clarified that he doesn’t care what Bloom wears on his bike, and included a photo of himself wearing a sleeveless singlet to prove his point.

To everyone who had a sense of humour fail… it was a joke! Orlando can, of course, wear whatever he likes to wear. Heck, he’s free to wear nothing at all (which he often does). pic.twitter.com/aK1SoG2Dsa