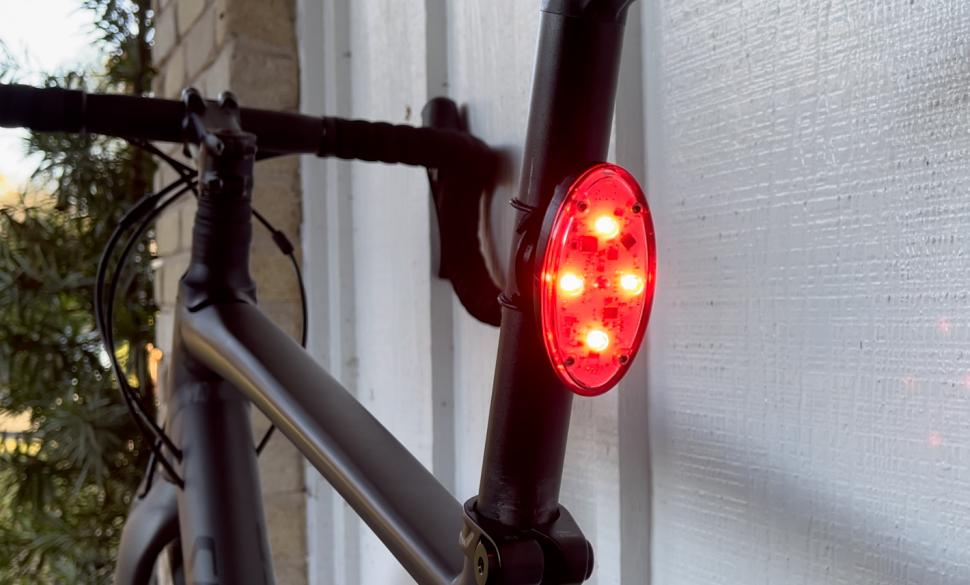 A fully automatic smart bike light which doesn’t requiring turning on/off with a button or app has been launched on Kickstarter. The OTTO bike light has lots of interesting features including braking alert flash patterns, wireless charging and one handed mounting. It has a goal of £40,320 which needs to be reached by Friday 12 February 2021 for the go-ahead of the product.

By sensing the movement of the bike and detecting ambient light levels, the OTTO bike light is said to work “auto-magically”. A button or app is not needed to turn this light on and off, nor do you need to press a button to shift through the different modes.

The light uses the data collected by these sensors to choose a brightness level and a flash pattern, of which they are five options.

The OTTO uses four CREE LEDS and is said to be “insanely waterproof”, with a goal of being IP67 rated. This should cover rainy rides and cause no damage to the light.

Making further good use of sensors, the OTTO detects when you are slamming on the brakes and automatically flashes a pattern which is designed to attract attention. It is claimed this only activates under heavy braking and so is not for common, slow speed stops as you approach traffic lights.

There’s also a Peloton mode for telling if the rider ahead of you is speeding up or slowing down. Using onboard motion sensors which can detect small variations in speed, it is said to display this with an array of amber LEDS.

There’s no need to plug the OTTO in to charge, it has wireless charging compatibility with industry-standard Qi chargers. An impressive 30 minute fast charge is also claimed.

With only one hand free, the OTTO can be easily attached with a Garmin standard 90-degree rotational clip, which supports both horizontal and vertical orientations. Enabling you to easily swap the light between bikes, the OTTO will also come standard with two mounts.

Taking the OTTO off the bike will turn it off, but when shaken, the light will wake up for 60 seconds. This could prove useful for navigating the alleyway round the side of your house in poor lighting.

Bluetooth connectivity has been included in the OTTO, so that new features can be rolled out in the future. User defined modes, turn-indication capability and detailed ride diagnostics are hinted at on the Kickstarter page.

Delivery to backers is said to be from October 2021 and you can find the OTTO Kickstarter page to pledge support here.

All the usual Kickstarter rules and regulations apply which can be found here.