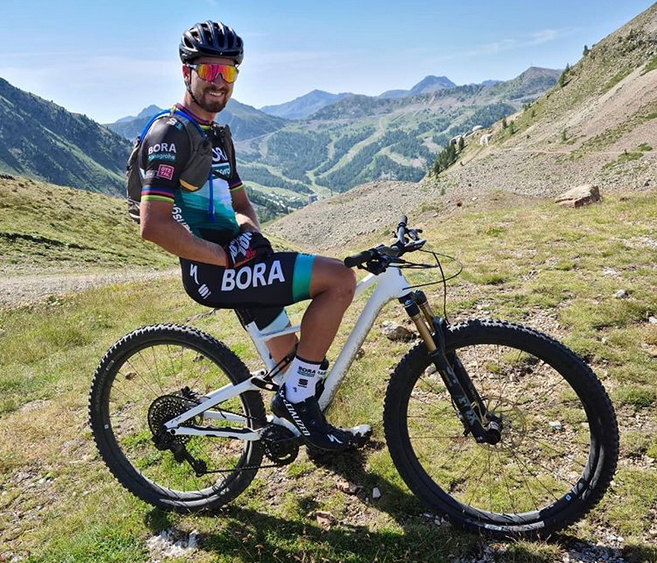 Most of pro road peloton is gearing up for a hectic condensed WorldTour calendar. Peter Sagan is happy spending his time on trails mountain biking.

The Bora Hansgrohe star has taken his high altitude training off-road. With just a week before the WorldTour resumes with Strade Bianche, Sagan is posting videos of hitting jumps in the bike park on his Specialized Stumpjumper.

It’s great to see the pro roadies mixing it up and having some fun with their training, especially given this year’s unusual season. Will we see Sagan racing World Cups against Schurter and van der Poel soon? Maybe not. He definitely has a ways to go before he can match MvdP’s whips, too. But still, for a guy who has some of his most important race dates looming on the calendar, he’s looking pretty confident sending it off ladder bridges in the high mountains.

It’s not the first time Sagan’s sought solace (and smiles) off-road. The former junior cross country world champion opted to race the Olympic XC race in 2016 when the road course didn’t suit his style. He’s even featured in a Cannondale mountain bike ad alongside Italian XC Olympic medallist Marco Fontana. More recently, Sagan’s mused publicly that a return to dirt might be in his future when he was less than thrilled with manners in the peloton.

For now, it’s more likely that we’ll see Sagan sprinting for wins on the road. He has a busy fall schedule of Spring Classics and Grand Tours.

Further into the future? Who can tell. The three-time world champ has a history of defying expectations beyond just unexpected race wins. Peter Sagan detoured to mountain biking before in Rio in 2016. With one former Bora Hansgrohe teammate already lobbying Sagan to return to dirt, it is not entirely out of the question.