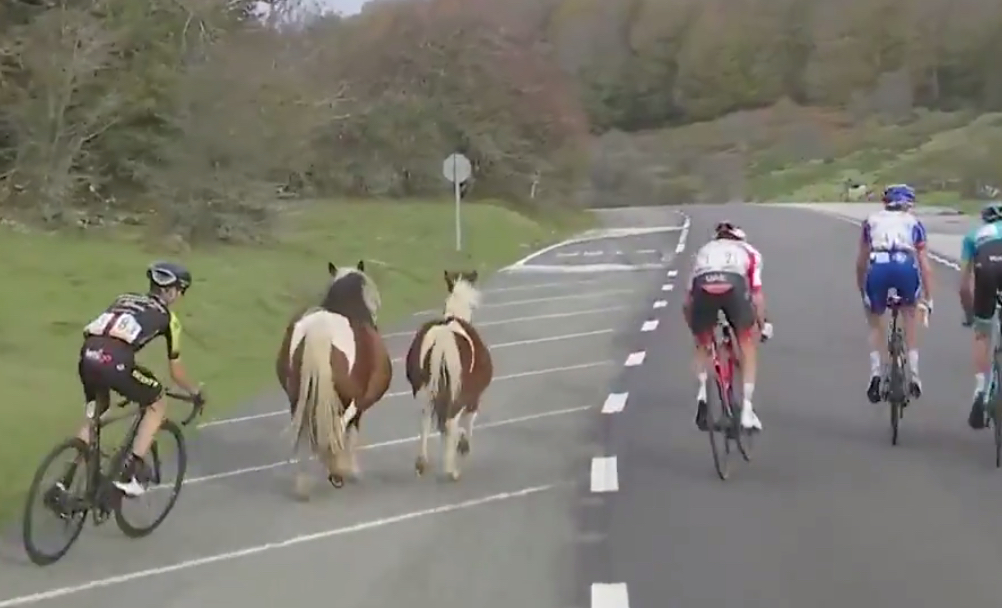 Professional cycling can be a bit of a dog and pony show. Elaborate kit, team presentations and the pomp and ceremony of podium presentations are all fun elements of the sport. During the second stage of Vuelta a Espana on Wednesday, the emphasis was more on ponies than dogs, though.

Late in Wednesday’s stage, the lead group was joined by several unexpected hooved guest riders. On the 17km descent from San Miguel de Aralar to the finish in Lekunberri, a group of miniature horses trotted across the road between the solo leader, Marc Soler (Movistar) and the rest of the front group.

Three of the ponies made it safely across the road in front of the reduced peloton. Two, though, diverted and trotted with the group of seven riders.

While the guests were cute, it made for a tense moment in the race. The group contained several of the race favorites, including race leader Primoz Roglic (Jumbo-Visma), Alejandro Valverde (Movistar), Richard Carapaz (Ineos Grenadiers), Esteban Chaves (Mitchelton-Scott), Dan Martin (Israel Start-Up Nation) and EF Pro Cycling’s Hugh Carthy. While the horses were small in stature, they were easily large enough to end any of those riders’ Grand Tour efforts early.

While the Roglic’s group made it safely past the horses, they could not reign in Soler. The Spanish rider’s late-stage solo escape proved successful. His attack on the descent earns the Movistar racer a Grand Tour stage win.

Further back, Jumbo Visma’s Tom Dumoulin was not having as much luck. The Dutch rider finished 8:20 back on the day, all but ending his GC hopes. As at the Tour, Dumoulin will now likely ride for Roglic.

While the Vuelta a Espana ponies were particularly cute, they’re not the first equine disruption to the pro peloton. It’s not, surprisingly, even the first time a miniature horse has disrupted a race.

Back in 2017, a tiny pony joined in with the peloton on Stage 6 of the Tour of Poland. That particular pony did a much better job of keeping pace, staying in the pack for nearly a kilometre before a rider pulled up alongside and encouraged it to exit the bunch.

One year earlier, a pair of much larger horses disrupted a mountain descent during Stage 13 of the Giro d’Italia.

As for the canine half of the dog and pony show, they’ve caused their own fair share of problems in the peloton. There have been numerous cases of dogs disrupting the Tour de France. In 2019, a dog escaped its owner to join Mathieu van der Poel for part of a lap at Druivencross.