Rider Interview: Sixth place in last Saturday’s Monument – Milano-Sanremo, a surprise result for Dion Smith? No, not if you look at the New Zealander’s build up over the years. Ed Hood caught up with Dion the day after Sanremo to hear all about it. 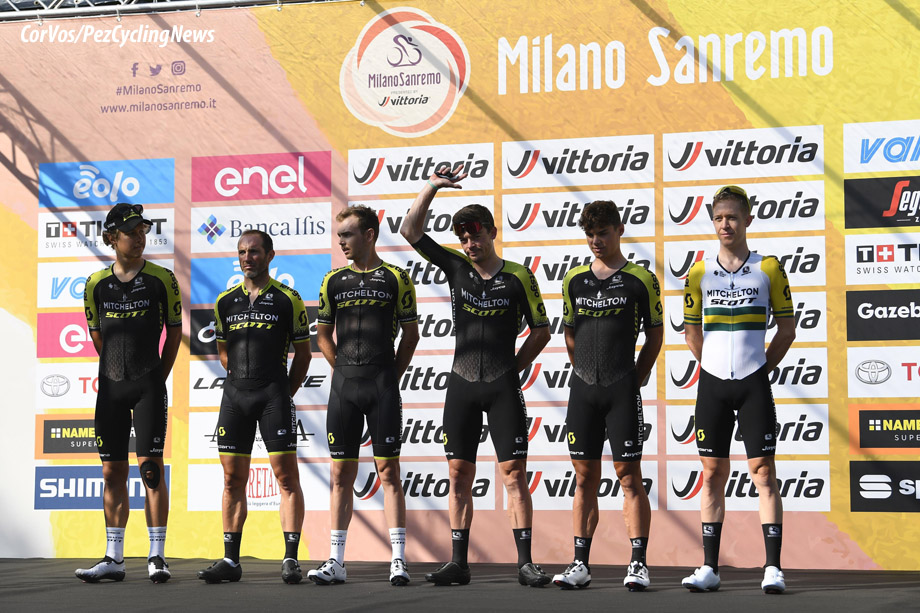 ‘Expect a very different Milan – San Remo this weekend,’ said the English, ‘Cycling Weekly’ magazine in their race preview. They got that wrong; it was ‘all about the Poggio’ as we predicted and as it has been for the last couple of decades. A surprise winner? No chance.

Two of the best riders in the world off the front and battling for their name on that historic roll of honour – with Wout Van Aert (Jumbo-Visma) adding another beautiful Italian race to his palmarés after last week’s Strade Bianche victory.

Michael Matthews (Team Sunweb and Australia) took third behind the two desperados despite blood pouring from a hand which was scraped hard against one of the high retaining walls on the Poggio. Fourth spot went to omnipresent Peter Sagan (BORA-hansgrohe and Slovakia) with Giacomo Nizzolo (NTT Pro Cycling and Italy) commanding our respect – he’s no lightweight but survived the warp speeds of the Poggio to be in at the kill. 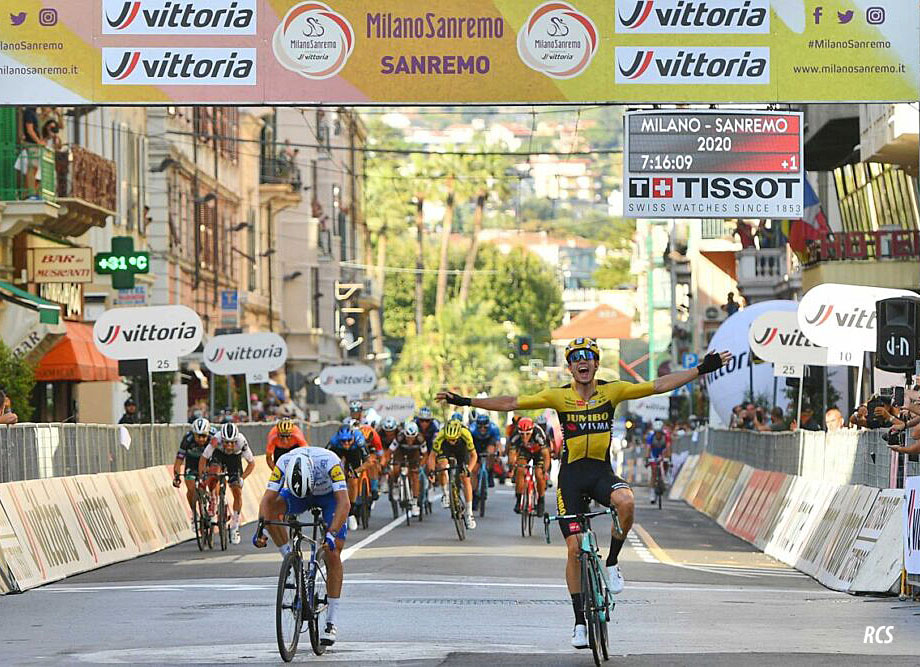 Smith – Finishing a fine 6th, in the middle

In sixth spot there was a surprise, 27 year-old Kiwi, Dion Smith (Mitchelton-Scott) who bested the likes of GVA, Phil Gil and Matej Mohoric. But if I’d done more homework I’d have seen that Smith was well ‘there’ in the mid-week Milan-Turin with ninth place. The man from Taupaki in the north west of the North Island took time to speak to PEZ the day after his outstanding ride.

PEZ: Thank you for speaking to us Dion and congratulations on a great ride, how are you feeling today?
Dion Smith: Pretty tired, we were up early to get to the start yesterday and were in the saddle for seven-and-a-quarter hours with a four hour drive after the race to get back to the hotel – we got there at 01:30 am. We just did an easy hour with a coffee stop today.

PEZ: And this was your first Milano-Sanremo, did you do some homework on the percorso?
Yes, my first time, when I was with Wanty we never had an invite but I went on the internet to check the new route and spoke to team mates who were familiar with the finalé, from the Cipressa home, which was unchanged.

PEZ: After your strong ride in Milano-Torino were you the protected rider yesterday?
I wasn’t meant to be the man for Milano-Torino, Alex Edmondson was, but he came down and I took over. I showed good form and the team put their faith in me. 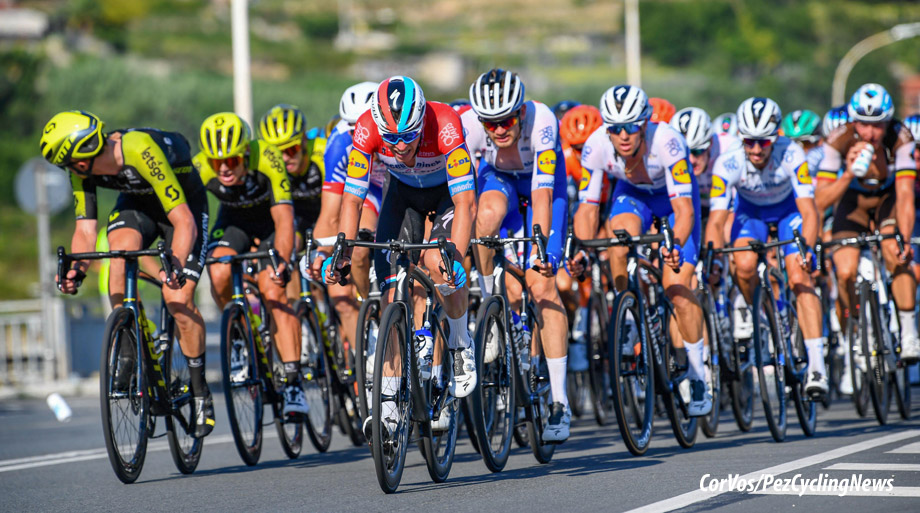 PEZ: What distance did your computer show at the finish?
Including the neutralised section 317 kilometres, the original distance was 299K but they had to divert round a town late in the day which added six K.

PEZ: Was the heat a factor?
I was conscious of it but kept well hydrated and cool in the early phases, the guys were going back to the car to get bottles for me. But it is a factor, if you go into the red in the heat it takes longer to recover. 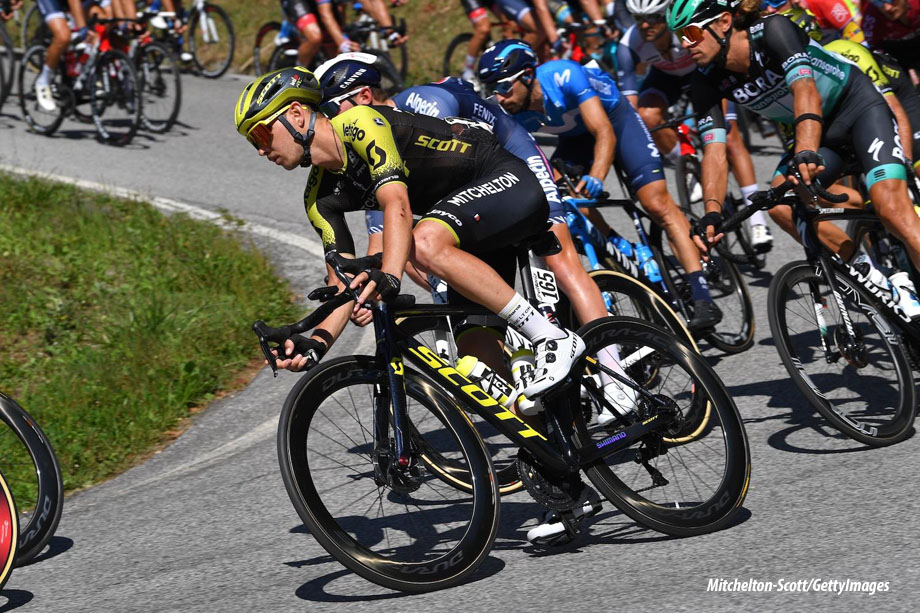 Watching the others on the descent

PEZ: The ascent of the Cipressa spelled, ‘ciao!’ for Bouhanni, Ewan and Gaviria, didn’t it?
The hardest part of the Cipressa is the run into it, but fortunately I was well positioned.
That climb doesn’t feel like much on a two hour training ride but at that stage of the race after all those kilometres and with the stress, it’s difficult – and the race really strings out on the descent. 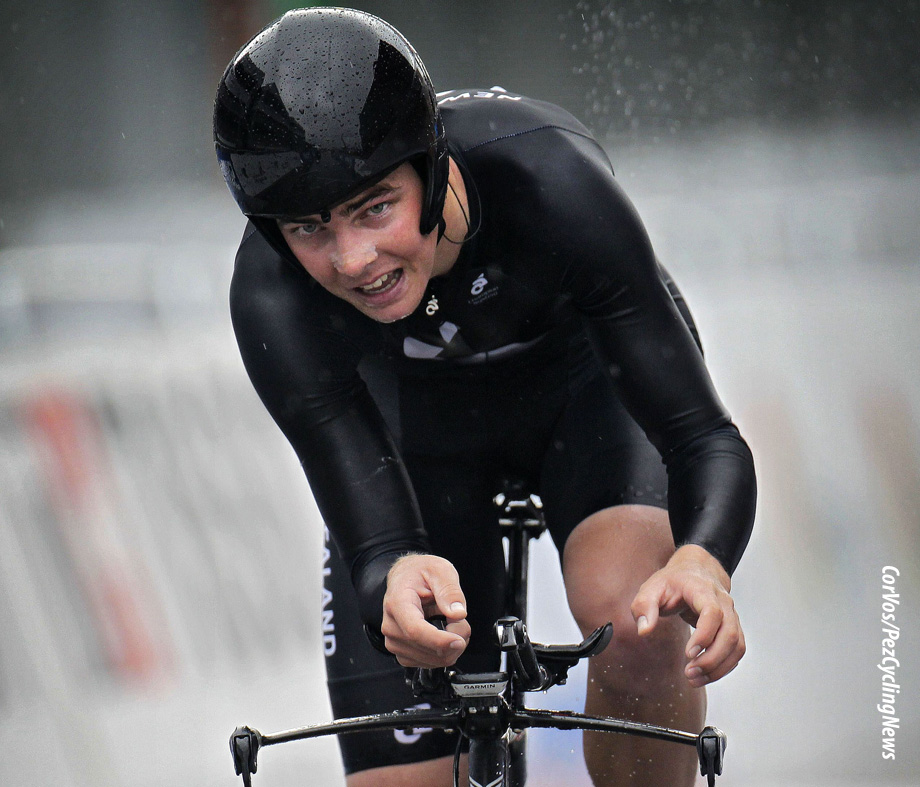 PEZ: Tell us about from the start of the Poggio in to the line, please.
My team mates Rob Stannard and Alex Edmondson set me up near the front coming into it; Quick-Step caused a massive surge on the approach but I stayed safe and even moved up a few positions on the climb. There was a surge again at the top and I got with it, the top 15 riders, except for Van Aert and Alaphilippe, of course. It’s a technical descent but I got on Sagan’s wheel for it and figured that was pretty safe but you have to kick hard out of those hairpins. I moved up a little at the red kite because I knew it’s super-quick from there to the line, there are a couple of corners where you can’t move up and the finish straight comes up before you realise it. I was on Gilbert’s wheel, he went early and I thought, ‘I have to go now,’ maybe earlier than I would have liked, a couple of guys passed me in the last 50 metres but I was pleased with sixth in that company. 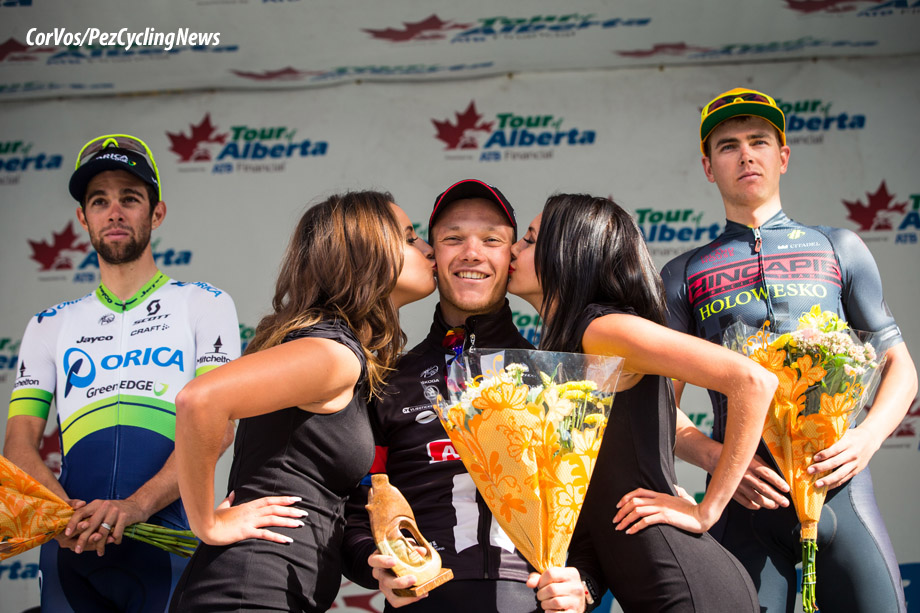 PEZ: That ride must have given your confidence a huge boost?
I was nervous coming in to the race, my first time as team leader with the team putting faith in me, so it was a relief to justify that faith. I’m looking forward to Piemonte on Wednesday; Lombardia on Saturday is for the pure climbers so I’ll be in a supporting role there. 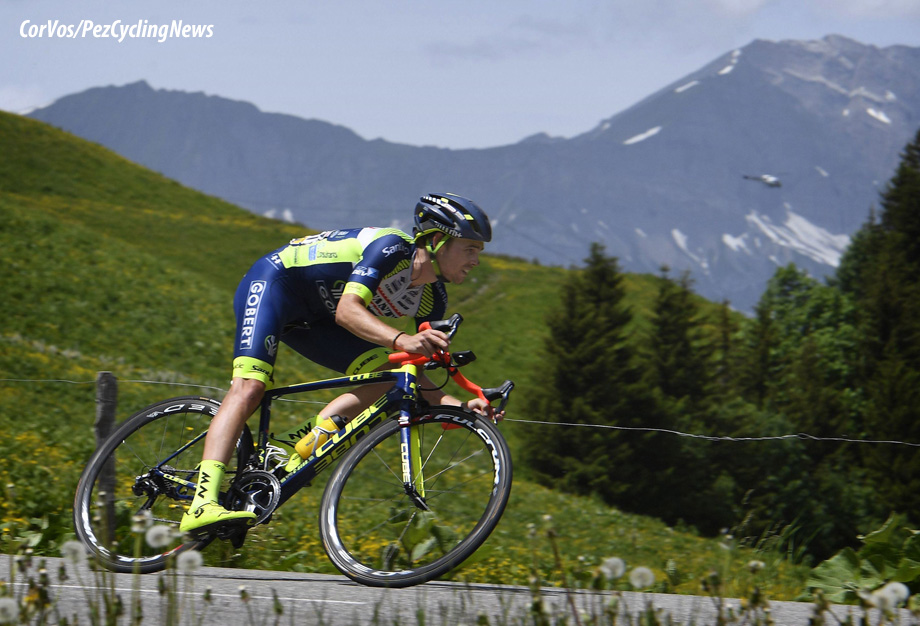 PEZ: You’ve paid your dues to get to the WorldTour, Dion?
Yeah, I started out with a small team in West Los Angeles, ‘Full Circle Cycling’ in 2013 and was picked up by the Predator team with Emile Abraham as rider/manager. That was a good time, driving from race to race, criteriums, road races, winning enough money to live on. I rode reasonably well with them and after I got sixth in Philly, Champion Systems offered me a place – I had a couple of months in Europe with them but then the team folded. 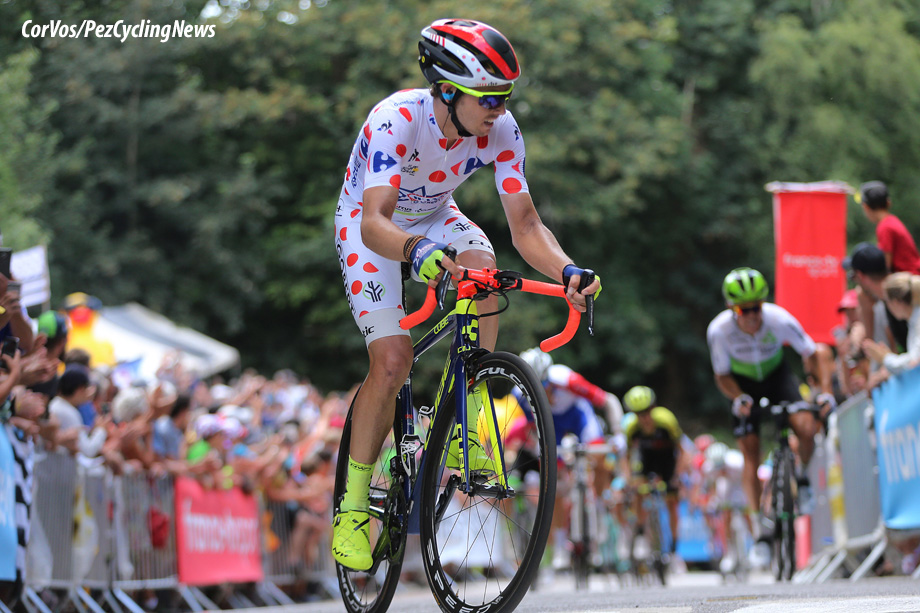 PEZ: Two seasons with ‘old school Belgian’ team Wanty, how did you get that ride?
One Pro rode the Four Days of Dunkirk, I got fifth on a stage and on GC, unknown to me, Wanty had noted the result and I was on their radar. When One Pro folded they got in touch but the team was ‘full’ and I was going to ride for them for nothing – then Louis Westra retired and I got his place. Old school Belgie for sure, it was hard for the first few months but it was an experience. I went from not knowing what I was going to be doing to riding the Tour de France in a matter of months – it was crazy. 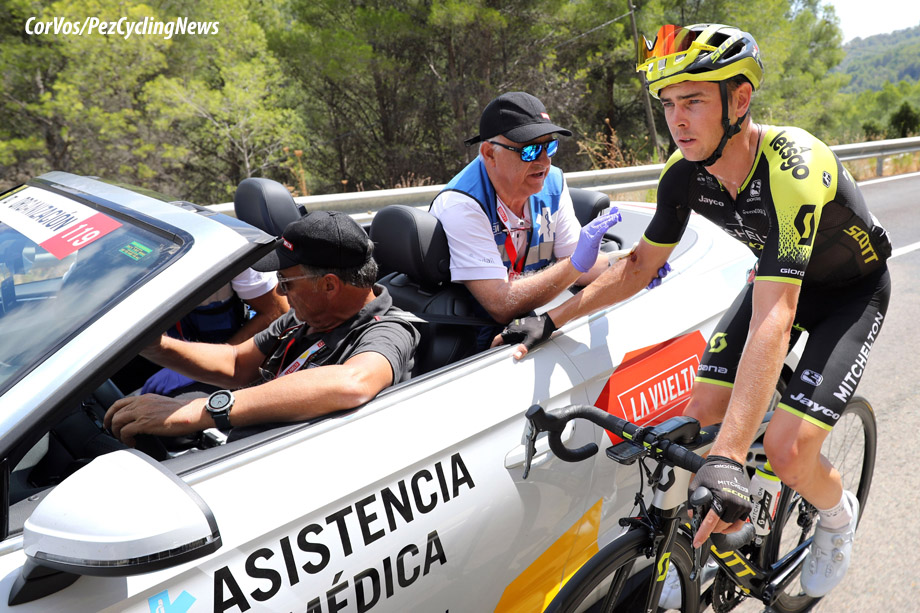 Early crash in the 2019 Vuelta

PEZ: Moving up to World Tour with Mitchelton Scott must have been special?
When you’re at pro continental level you’re riding against WorldTour teams but to join one was special, yes. I knew the Kiwi guys on the team, Sam Bewley and Jack Bauer but at the Tour in 2018, Julian Dean who’s a Kiwi and DS with the team asked me what I was doing for 2019. I replied that I had a ride with Wanty if I wished; he told me there was a spot on Mitchelton Scott if I wanted it. It’s what every rider dreams of, riding WorldTour, when I signed the contract it was surreal. I just love being on this team. 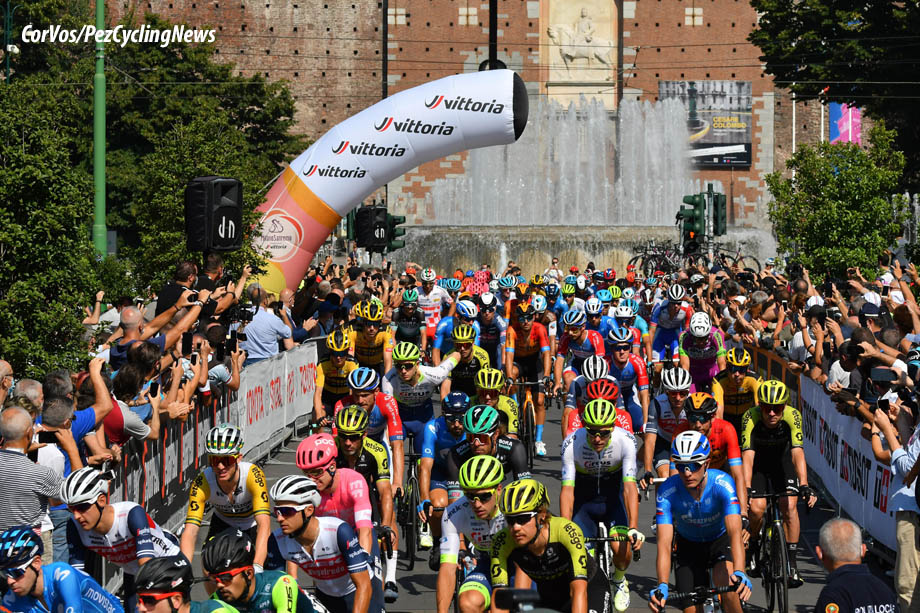