After a new bike, new shoes are right up there to make you feel like you can conquer the world. If you’re looking at the best that different manufacturers have to offer (and want to channel your favorite pro rider), then have a look at the new Shimano S-PHYRE RC902 top tier road cycling shoe. 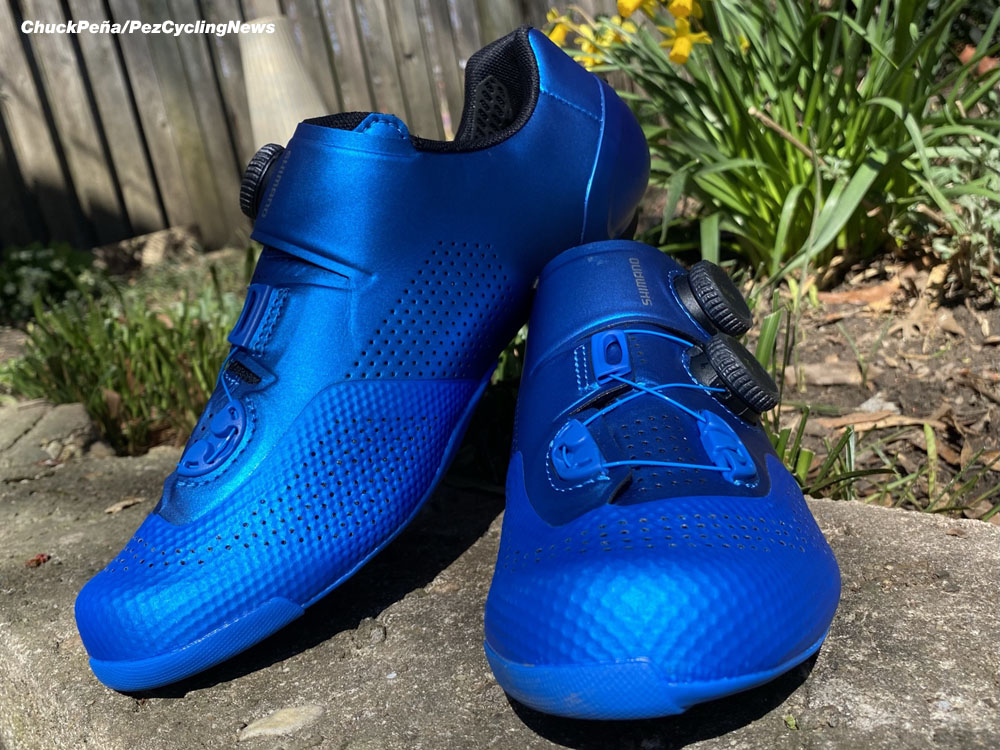 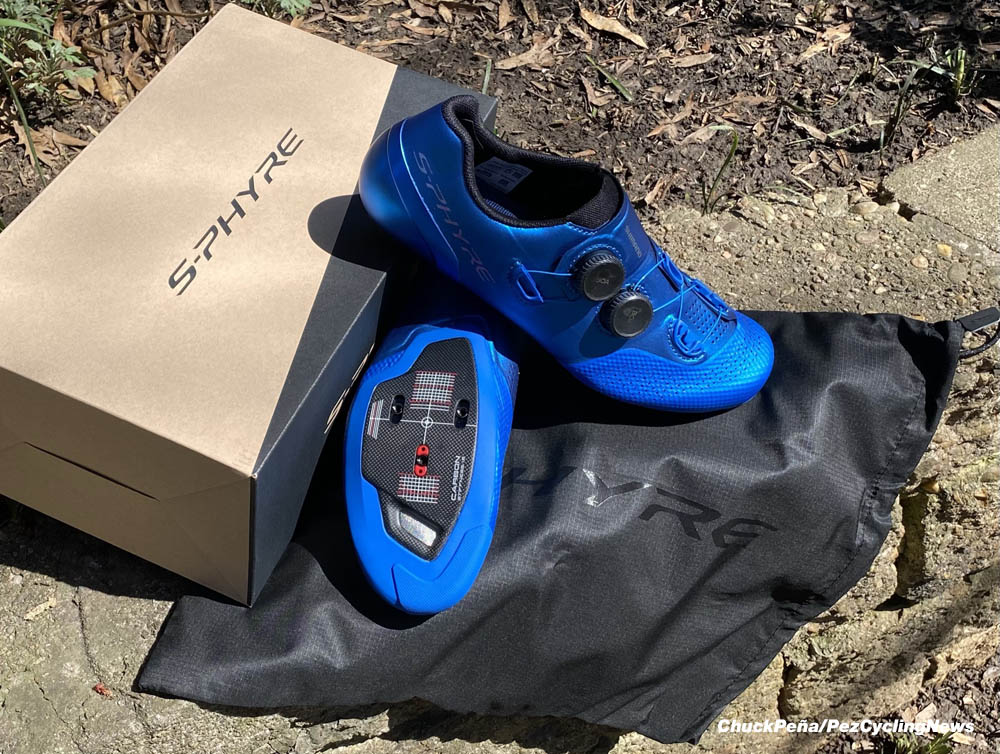 Yes, I know … another pair of uber expensive shoes. But if you want pro level kit, it costs. And the pricing isn’t out of line with most other companies’ top shelf shoes worn by the pros we all strive to emulate.

Speaking of pros … if you watched some of the early season French races (such as Tour de La Provence, Faun-Ardèche Classic, Royal Bernard Drome Classic, and Paris-Nice) and noticed Warren Barguil wearing a pair of snazzy blue shoes, those are the Shimano S-PHYRE RC902s (PEZ got the same flash blue shoes). Rising Swiss star Marc Hirschi (who won Flèche-Wallone last year) is also wearing the S-PHYRE RC902s (but not the blue ones). And another rider you might know pedalling in S-PHYRE RC902s this season is Wout van Aert. Not that the shoes are going to make you ride like a pro, but they have pedigree. 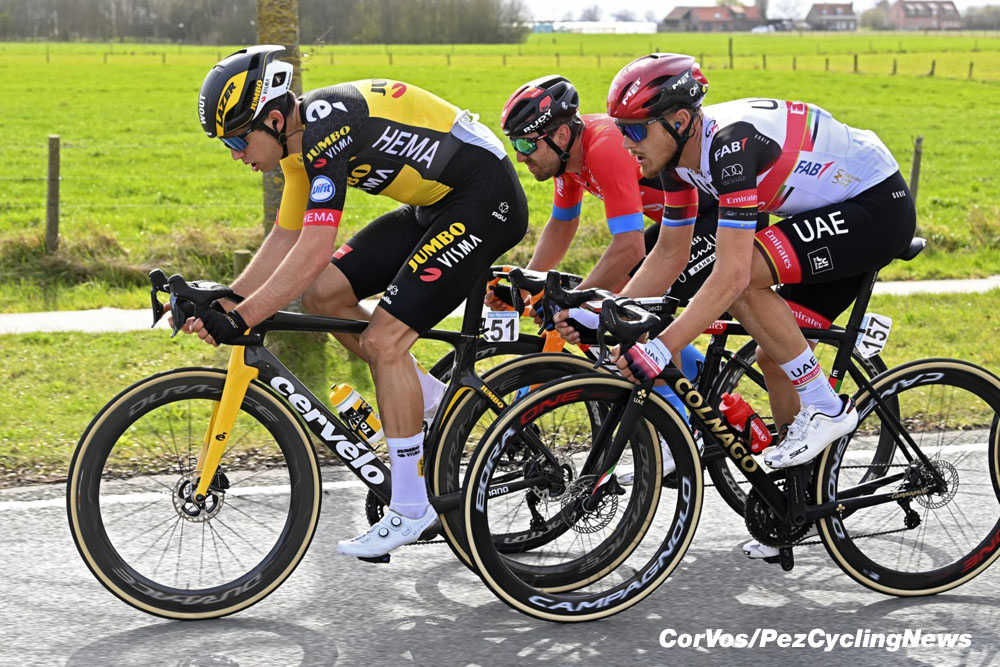 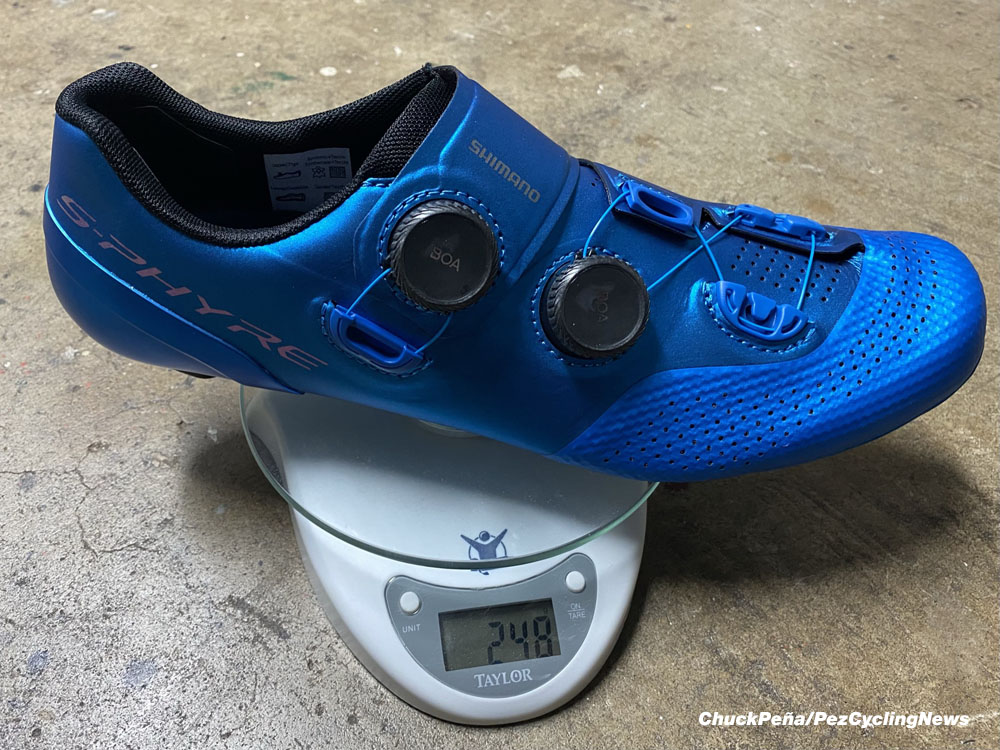 The stuff you expect

For starters, the S-PHYRE RC902 has a stiff carbon sole to efficiently transfer power from your feet to the pedals and extract every last watt of pedaling force. Every manufacturer has their own scale for measuring sole stiffness (and I don’t have a way to measure how stiff a sole actually is), but as you would expect, Shimano rate their sole a 12 on a scale of 12. 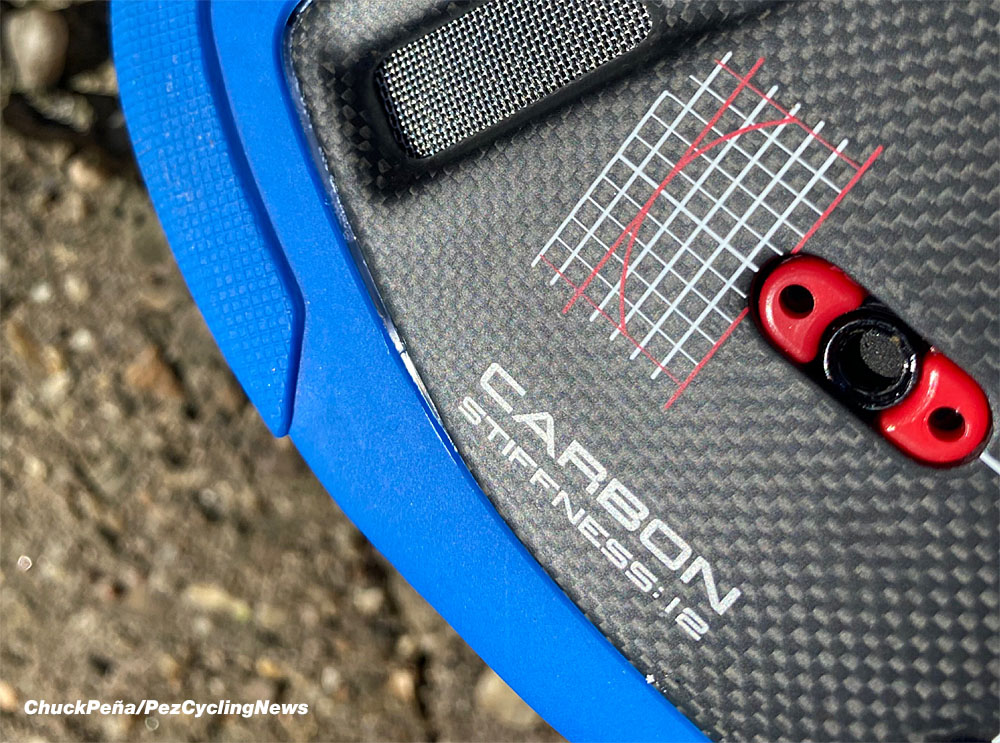 Cleat mounting is via the standard 3-holes for road cleats found on other shoes. Shimano actually has a cleat setting system, but it requires a Brannock device (the thing shoe stores have to measure shoe size and I don’t have one) to measure the differences in heel-to-toe measurement and arch measurement to determine cleat placement. I was able to get my foot positioned where I like it (with the ball of my foot just ever so slightly forward of the pedal axle) by mounting my cleats (the new Wahoo Speedplays) as far back as possible. This is actually no small feat (no pun intended) because my experience with a lot of shoes is that they don’t have enough range of fore/aft adjustment to get the cleat that far back — so kudos to Shimano. 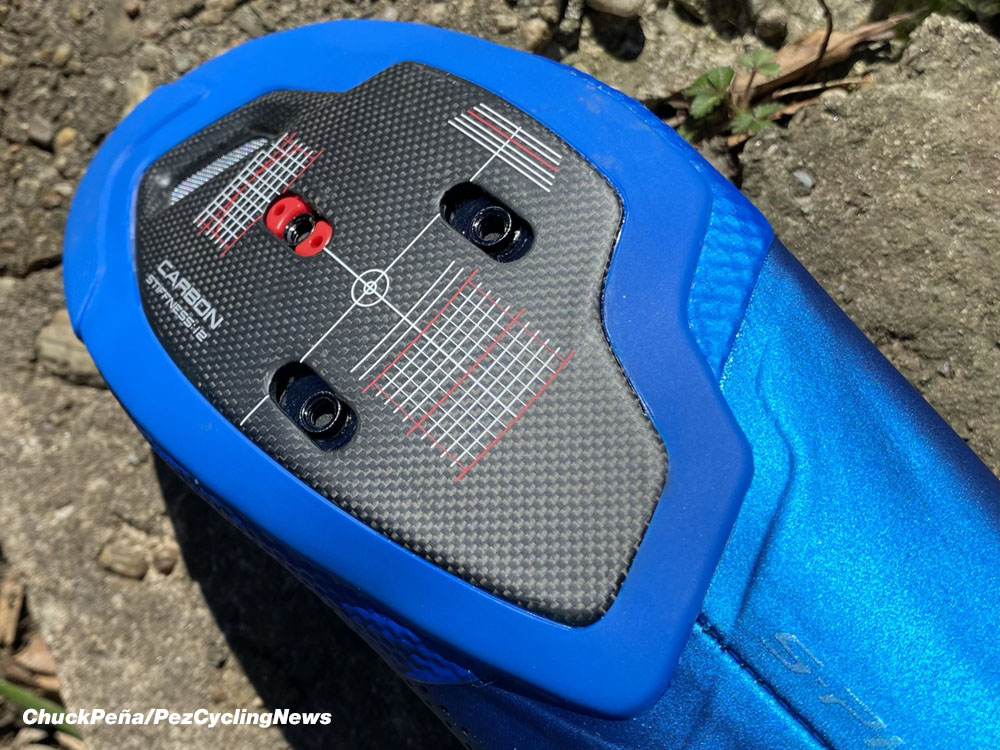 It’s not yet summer here in Babylon on the Potomac, but the S-PHYRE RC902 is a well ventilated shoe for when temps hot up. The front of the upper has lots of perforations. There’s an intake on the bottom front of the shoe and an exhaust port at the heel to help flow air through the shoe. In colder/wet weather, you’ll probably want to tape these closed (which is why God invented duct tape). 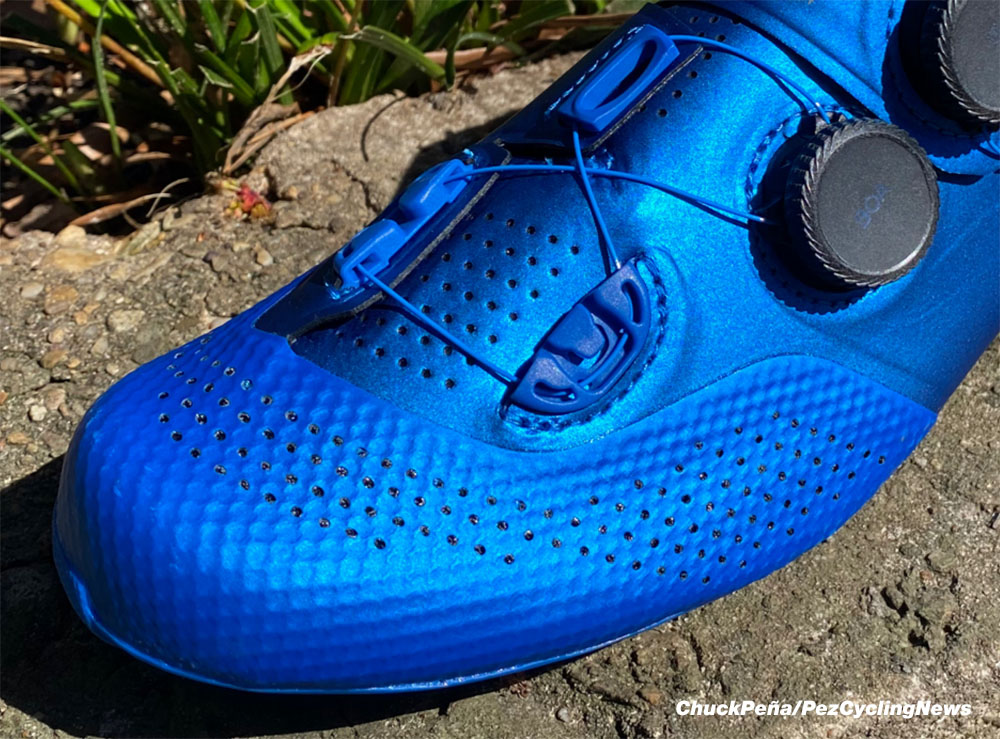 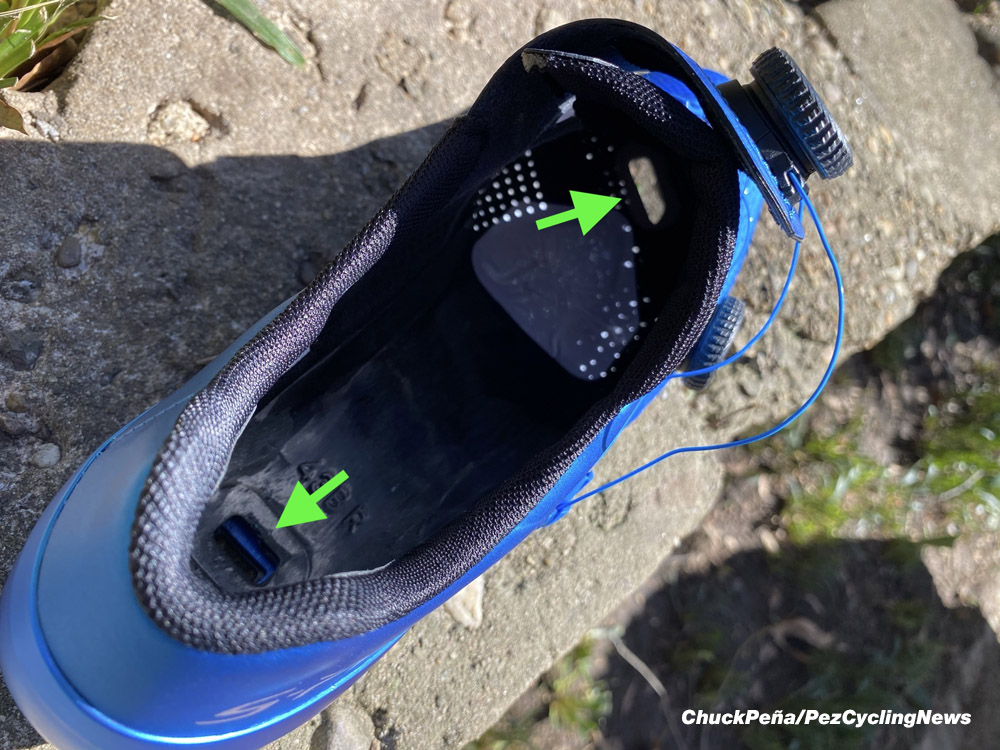 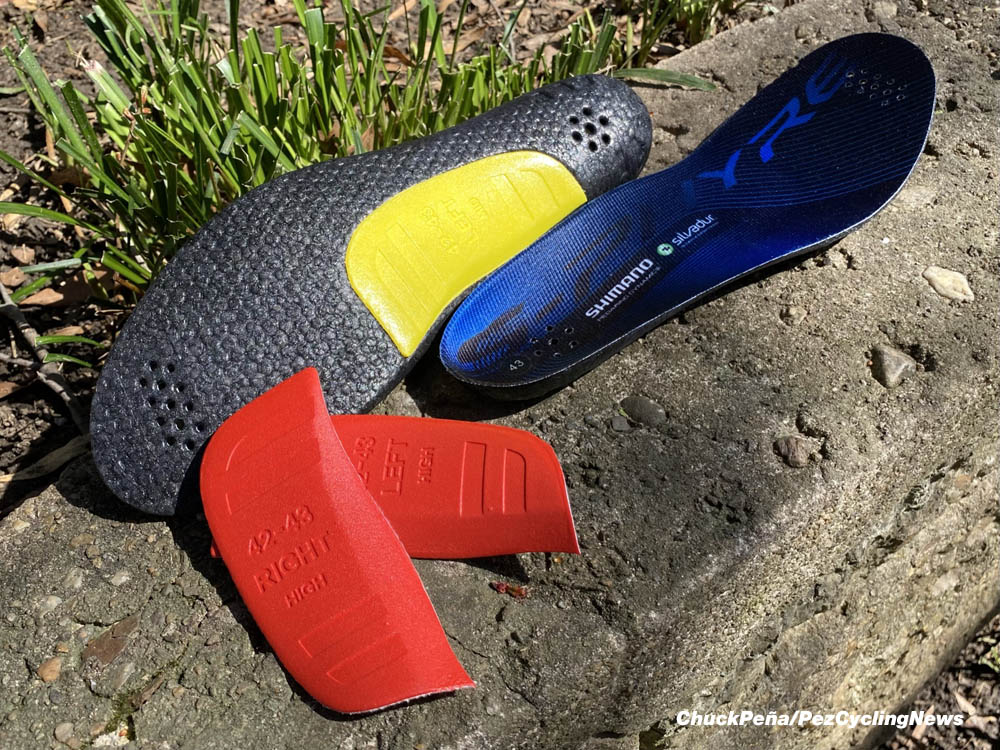 Finally, as is pretty much standard for road shoes these days, the heel pad is replaceable.

The heel pad is screwed in place from the inside

I wear a US size 9 which is Euro 43 in Shimano’s sizing and the fit was spot on. So, for me, the RC902s were true to size. That said, it’s always a good idea to try before you buy because US-to-Euro (and vice-versa) sizing conversion can sometimes be a little off. And sizing varies from manufacturer to manufacturer (I’ve worn as small as Euro 42 and as large as Euro 43.5 from different manufacturers). 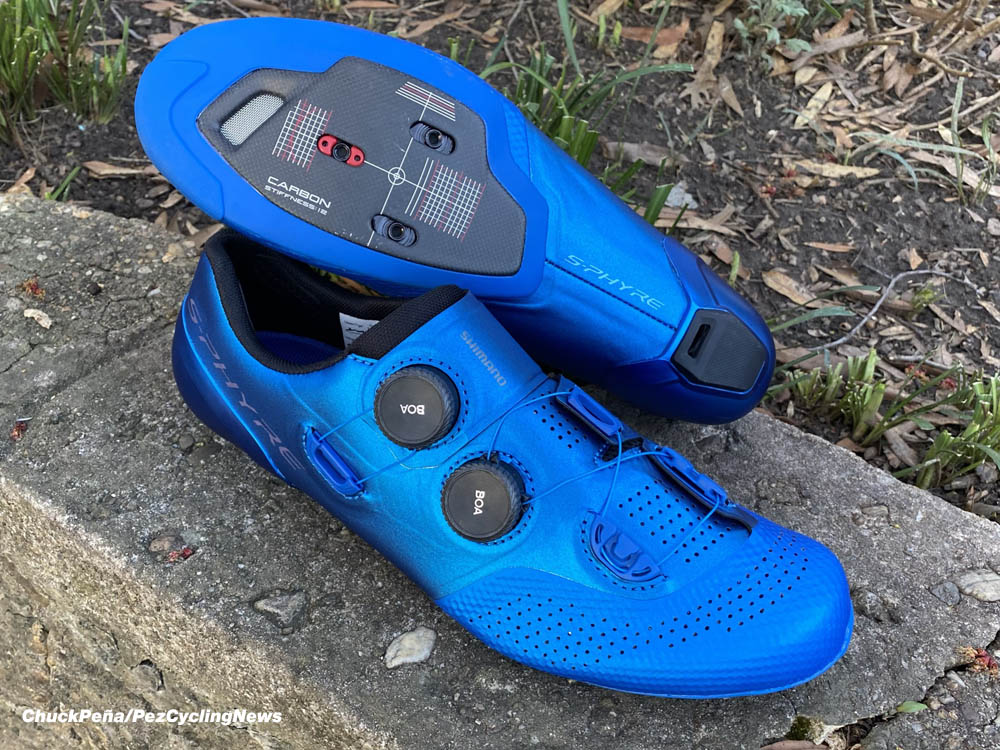 One thing you’ll notice about the RC902 is that it doesn’t have a fully exposed carbon sole like a lot of other shoes. Instead of being attached to the edge of the last/sole of the shoe, the upper wraps completely around to the bottom of the shoe — what Shimano calls a 360° surround wrapping upper (think “burrito”). The claimed benefit is that as you tighten the shoe, it pulls more evenly from both sides for better fit/comfort. I can’t tell you that it pulls evenly from both sides, but I can tell you that the wrapping effect is very comfortable. It feels like the upper surrounds your foot with even pressure as you tighten down the BOA dials. The mid-foot dial being on the flap part of the shoe rather than the side of the upper also contributes to it feeling more comfortable. 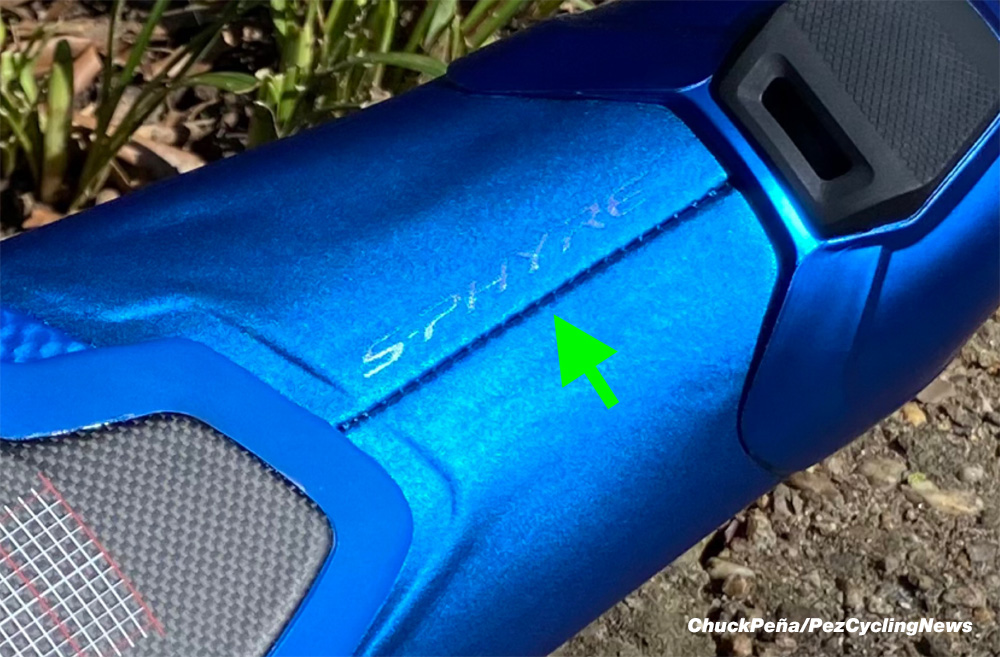 Speaking of the BOA dials, the S-PHYRE RC902 sports BOA’s newest Li2 dials, which won a Design & Innovation Award 2021 and are lower profile  than the BOA IP1 dials (you’d need a micrometer to tell the difference). But the Li2 dials work the same way as BOA’s IP1 dials: push down to engage them, turn forward (on either left or right shoe) to tighten, turn backward to loosen, and pull up to quick release them. I found the the click-stop microadjustability of the Li2 dials to feel more “micro” than the IP1 dials — which allows for a more precision fit. 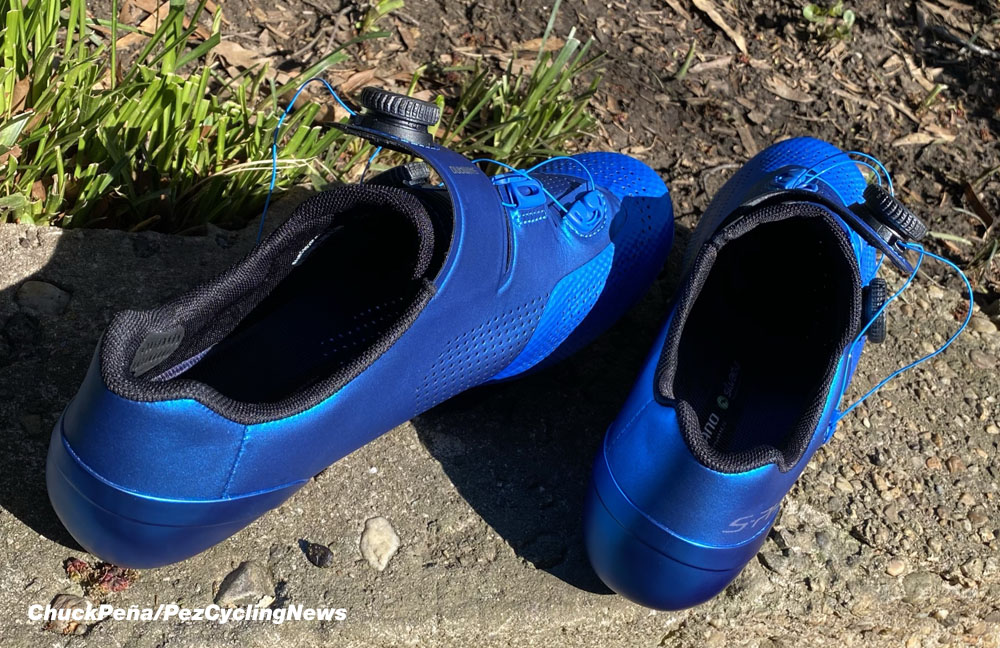 With the BOA dials released, the S-PHYRE RC902 opens up wide to make for easy entry and exit

It’s worth noting that the Li2 dials are more than just dials. It’s really an entire fit system consisting of three parts that work together: the Li2 dial, the lace (the CS1 lace uses 49 strands of stainless steel wrapped in nylon to withstand abrasion and shed dirt, debris, and water), and low-friction lace guides. One interesting feature of the BOA system on the S-PHYRE RC902s is the Powerzone lace guide in the forefoot, which allows you to essentially double the lace pull to create additional lace pull if you want a tighter fit (I can attest that this does indeed create a noticeably tighter pull/fit, but I was happy with the feel/fit of the standard lace pull across my forefoot). 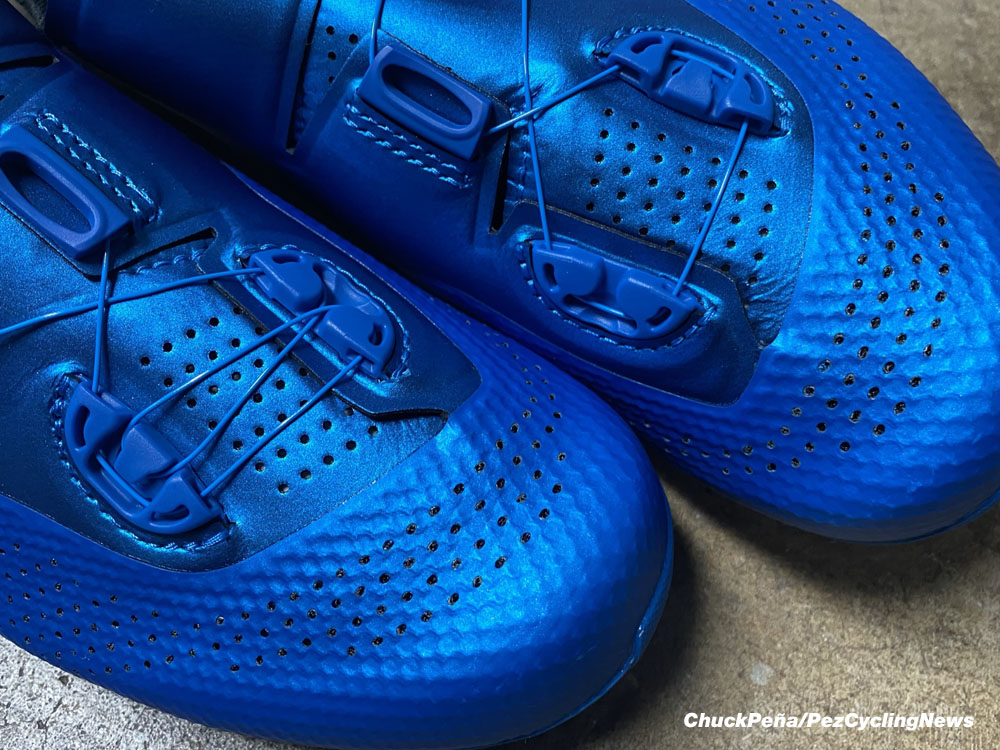 LEFT: The forefoot lace pulled across a second time via the Powerzone lace guide for extra tightness/hold. RIGHT: In its standard configuration.

One thing Shimano changed from the previous S-PHYRE RC901 is the shape of the toe box — it’s rounder. I haven’t worn the RC901 so can’t attest to any differences. But if you wear RC901s and are considering replacing them with RC902s, the change is worth noting and you shouldn’t assume they will fit exactly the same. Again, try before you buy is always a good idea. For me and my flat-ish feet (but normal/average width), the toe box on the S-PHYRE RC902s felt roomy enough so my toes weren’t squished together but not so roomy that it felt like I was swimming in them. 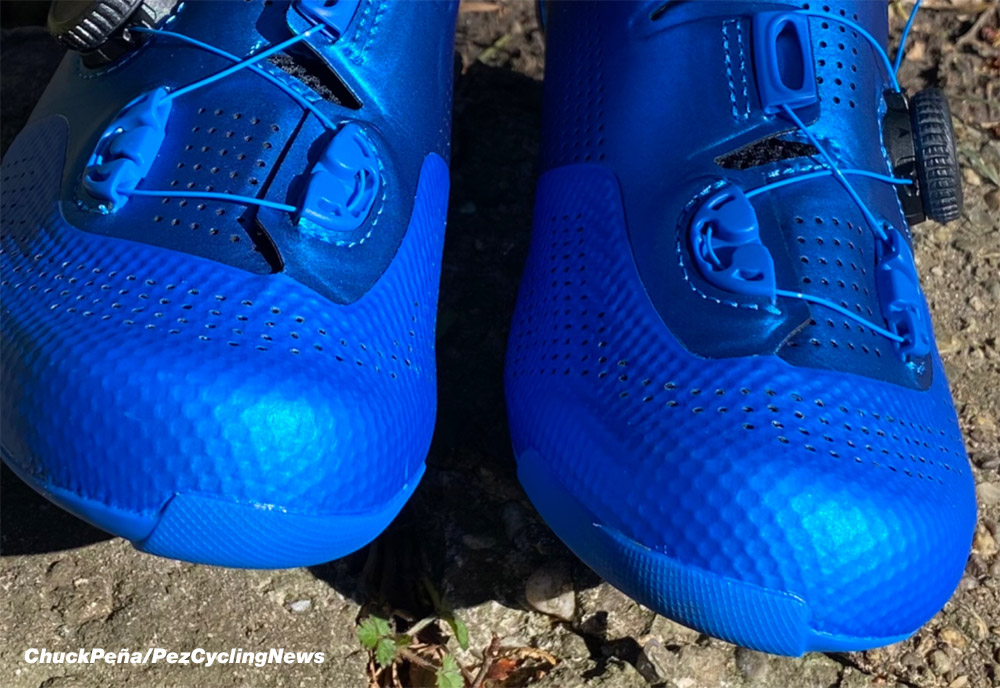 At the back, a beefy heel counter and silicone gripper on the inside of the well padded heel cup help keep your heel firmly in place

One thing I’ve learned from being fortunate enough to ride different pro-level shoes is that all that stiffness that pros like Wout van Aert need to put down ginormous watts don’t do you a lot of good if your feet aren’t comfortable in your shoes for the 5-6 hours typical of one-day races and longer days in stage races. That may be even more true for us mere mortals doing long days in the saddle. 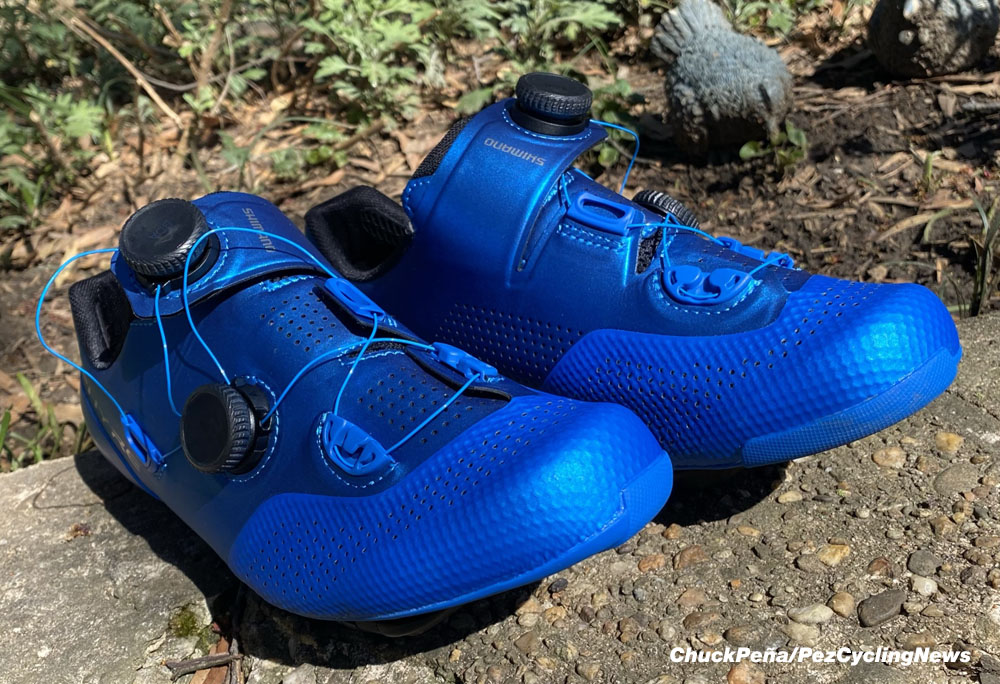 I haven’t had a chance yet to get out on any extended road rides (just a few shorter ones less than 2 hours) wearing the S-PHYRE RC902s, but I’ve done several long-ish indoor training sessions (including riding Ven-Top on Zwift) with them. In a lot of ways, indoor riding is a good test of shoes because it’s constant pedaling having to put down power with no freewheeling. Any uncomfortable-ness is going to make itself known early and often.

The S-PHYRE RC902 is right up there in terms of comfort. The way it wraps around is almost … dare I say … slipper like. With the BOA dials tight, I could feel the upper holding me firmly in place and knew my feet weren’t going anywhere, but if felt “soft.”  I didn’t feel any pressure points from the flap pulled across my instep, the BOA laces, or the BOA dials. Although I haven’t done any long rides in them yet, I have every reason to believe that the S-PHYRE RC902 will keep my feet happy for 4-6 hour sojourns dancing on the pedals.

Of course, all that comfort means I don’t have any excuses when it comes time to put down power, eh? 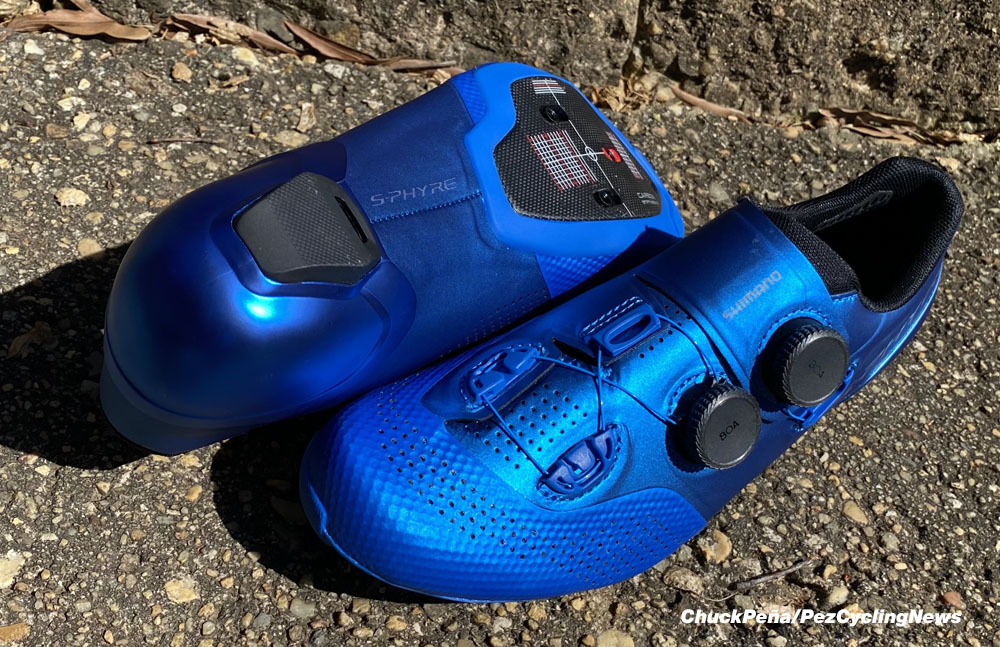 Speaking of which, another thing I noticed (and enjoyed) was lack of what I call “carbon sole fatigue” (which easily manifests itself doing longer indoor rides on a smart trainer because there’s never any let up on the pedals to overcome the resistance load). Yes, a carbon sole needs to be stiff for efficient power transfer, but if it’s too stiff it can “push back” and cause pressure points or hot spots on the bottom of your foot. Again, all that stiffness won’t do you much good if your feet aren’t comfortable in your shoes for you to keep pedaling.

You’ll notice that I’ve used the words “comfort” and “comfortable” a lot in that last few paragraphs. Everyone’s feet are different, but those are the words that best describe the relationship my feet have with S-PHYRE RC902 — whether it’s riding a steady tempo, surging to close the gap, standing out of the saddle to power up a climb, or just sitting around at my favorite coffee shop trash talking after a ride. When I get home from a ride, I’m usually in a hurry to get my shoes off (not because my feet hurt but just because I want to be more comfortable … there’s that word again). With the S-PHYRE RC902s I find I’m in less of a hurry. #marginalgains 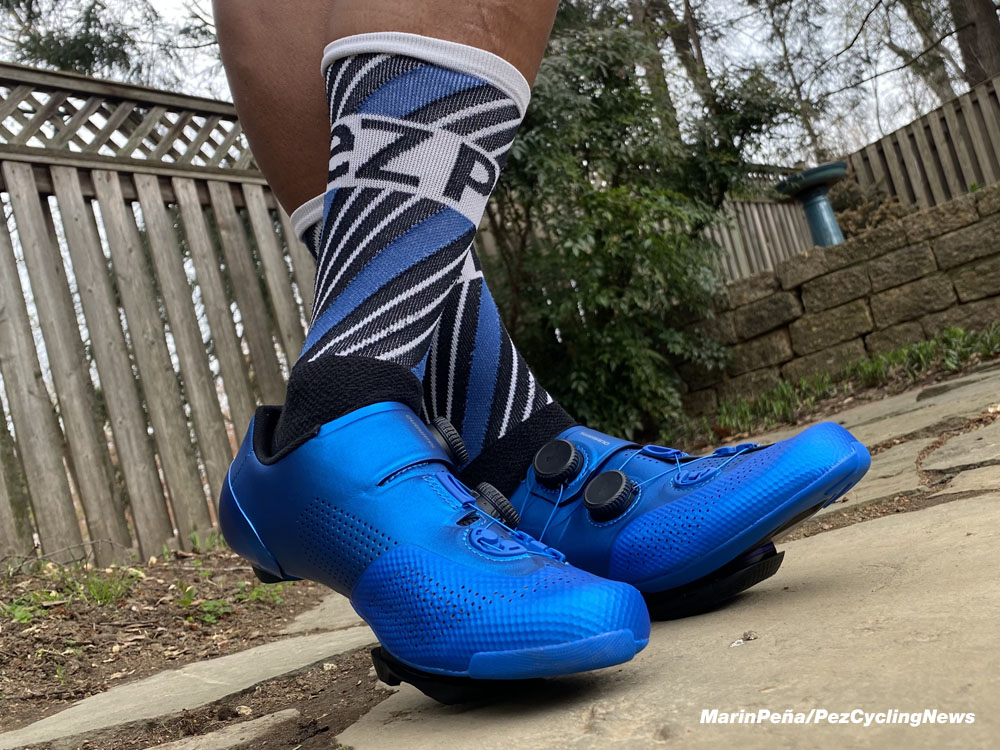 So should you drop four C-notes plus change on a pair of Shimano S-PHYRE RC902s? First and foremost, for me it’s literally a question of whether the shoe fits. The S-PHYRE RC902s might be the most comfortable cycling shoes I’ve ever worn, but YMMV. And if all you’re doing is shorter distance rides, it might be hard to justify the cost. But if you’re a serious enough roadie doing enough miles, looking for that ever elusive sweet spot that maximizes both comfort and stiffness, and in the market for a new pair kicks (and willing/able to drop some serious cash for them), the S-PHYRE RC902s make the short list of shoes the pros ride for your consideration. 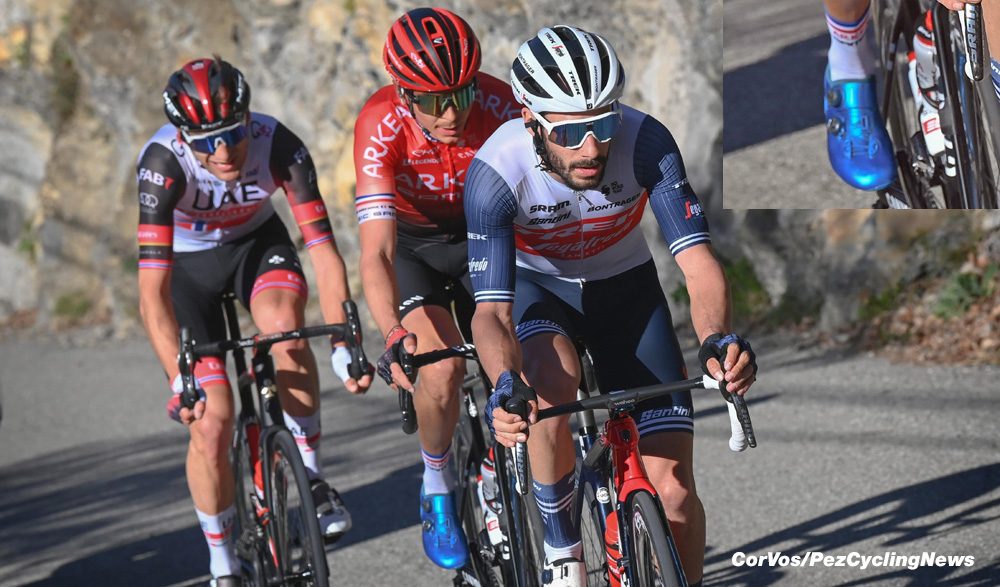 In a sea of white shoes in the pro peloton, Warren Barguil stands out in stylish blue

Just like buying a new bike won’t make you any faster, neither will buying a new pair of shoes. But they might give you motivation and inspiration to ride more and have a go at going faster. With the likes of Wout van Aert riding in the Shimano S-PHYRE RC902s, that’s not too shabby a role model for motivation and inspiration. To paraphrase the tagline used for a famous basketball player’s pair of shoes, you can be like Wout. 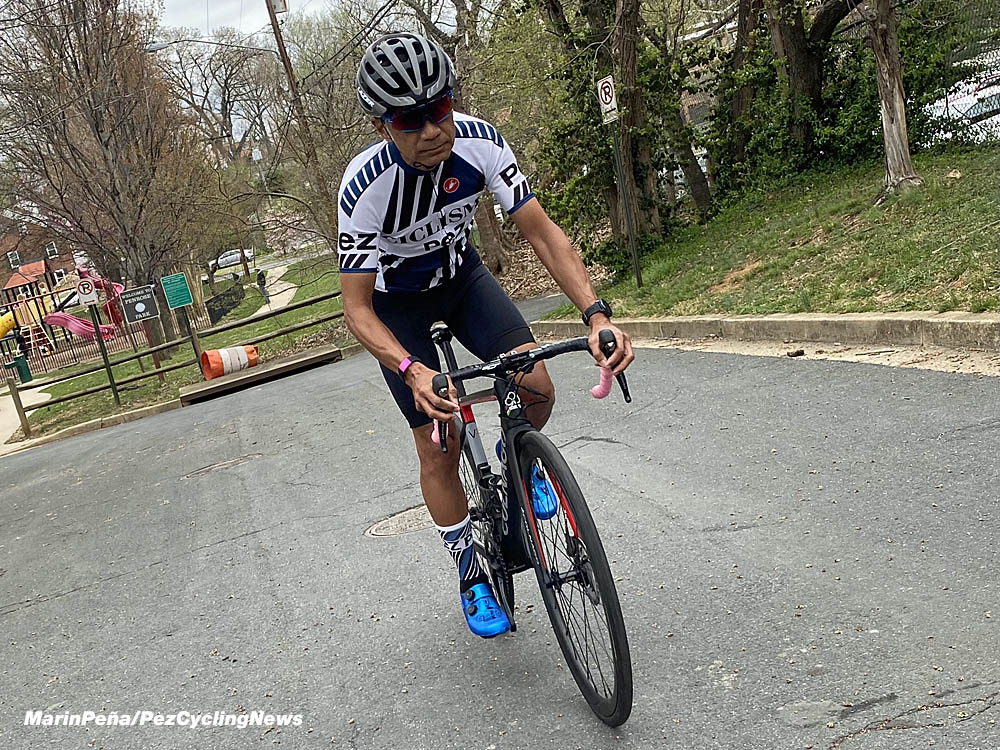 Channeling my inner Warren Barguil … or is it really just Elvis? #bluesuedeshoes

• Find a dealer near you at the Shimano website here.

Note: If you have other experiences with gear or something to add, drop us a line. We don’t claim to know everything (we just imply it at times). Give us a pat on the back if you like the reviews or a slap in the head if you feel the need!

PezCycling News and the author ask that you contact the manufacturers before using any products you see here. Only the manufacturer can provide accurate and complete information on proper/safe use, handling, maintenance, and or installation of products as well as any conditional information or product limitations.