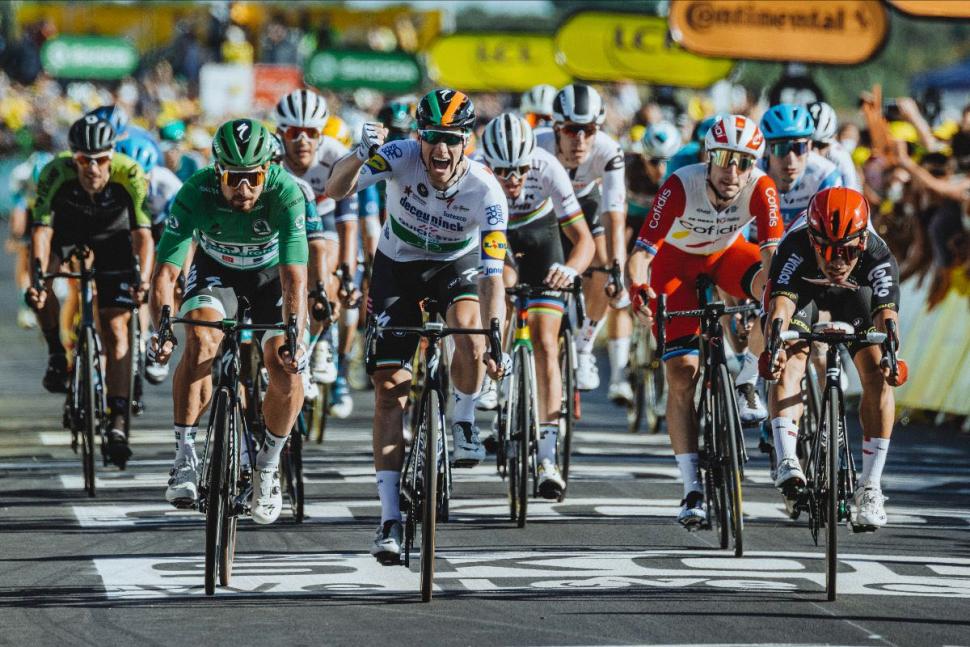 Norwegian Alexander Kristoff sprinted to the Tour’s first yellow jersey in Nice aboard a Colnago V3Rs. This aero road bike is available with either rim brakes or disc brakes, Kristoff opting for the latter.

The V3Rs is lightweight for an aero bike, Colnago claiming a weight of just 780g for a 50cm disc-brake frame (bear in mind that Colnago’s sizing is unusual and this is considerably larger than a 50cm frame from most other brands).

UAE Team Emirates is one of three teams in this year’s Tour to use Campagnolo Super Record EPS groupsets. The wheels are from Campagnolo too, Bora WTO 45s pictured.

Find out all about the Colnago V3Rs here

Julian Alaphilippe won Stage 2 and took the yellow jersey when he got the jump on fellow breakaway members Marc Hirschi and Adam Yates in Nice.

Alaphilippe was riding the new Specialized S-Works Tarmac SL7 – the first victory taken on the bike – which is designed to be both lightweight and aerodynamically efficient, to the point that the brand is booting its aero Venge into the long grass for 2021.

Find out all about the Specialized Tarmac SL7 here

Get the details on Roval Alpinist CLX wheels here

Australia’s Caleb Ewan pulled off an extraordinary sprint victory in Sisteron on his Ridley Noah Fast Disc. This is the top-level aero bike from the Belgian brand, with an integrated fork crown and fully internal cables.

Ewan’s setup is unusual in the pro peloton in that the very top of the Campag Super Record EPS Ergopower controls are just a fraction higher than the saddle, even though the stem is slammed. That low front end allows Ewan to get ultra-low and aero when sprinting.

The first summit finish of the race saw Primoz Roglic jump away from a select bunch in the final metres to win at Orcieres-Merlette.

The Jumbo-Visma team is using Bianchi Oltre XR4 road bikes equipped with rim brakes – the first time rim brakes have featured on a stage-winning bike this year. The rumour is that forgoing disc brakes is a means of ensuring the bikes are as close as possible to the UCI’s 6.8kg minimum weight limit, and the same is true of the black paint job which is said to be 80g lighter than standard team colours.

Shimano provides the Dura-Ace Di2 groupsets and the wheels, officially, although we think the team is unofficially using some Corimas too.

Jumbo-Visma makes it two from two, Wout van Aert backing up Stage 4’s team win with a sprint victory on the stage from Gap to Privas.

Jumbo-Visma uses the Bianchi Oltre XR4 for all road stages regardless of the terrain, so Van Aert’s bike is similar to the one Primoz Roglic won on yesterday, although with a more eye-catching and slightly heavier Bianchi Celeste paint job.

The XL sized Wilier 0 SLR that we rode at its launch last year, with a Shimano Dura-Ace Di2 groupset and Mavic wheels, was a whisker over 6.8kg (including pedals) – the UCI’s minimum weight limit – so we’ve no doubt that the Astana mechanics were able to get Lutsenko’s bike there or thereabouts for a summit finish.

Find out all about the Wilier 0 SLR here

Four of the six stages raced so far have been won on bikes from Italian brands. Relevant? Not really, no.

No way! It’s Wout van Aert again on the same celeste Bianchi Oltre XR4 as last time. Bianchi have been ridden to three stage victories out of seven so far.

AG2R-La Mondiale riders choose between the Eddy Merckx 525 Disc aero road bike and the lighter Stokeu69 rim brake bike, which is the one that Nans Peters opted for on the mountain stage to Loudenvielle.

The bike is built up with a Shimano Di2 groupset but with a Rotor chainset, and wheels from Mavic.

Eight stages done and wins have been split 50:50 between rim brake bikes and disc brake bikes.

Pogačar: “To wear the white jersey in the @LeTour is a really nice moment for me.”

Teammate Alexander Kristoff won stage 1 on a disc brake Colnago V3Rs, and Pogacar rode that version earlier in the race, but he opted for the model with direct mount rim brakes in the mountains, along with Campagnolo Bora Ultra wheels. There’s a lot more cabling on show with the rim brake model, but it can be built up a touch lighter.

Get more details on the Colnago V3Rs here.

Up to the first rest day the scores are:

Irish rider Sam Bennett outsprinted Caleb Ewan to take his first Tour de France stage win (he has stage victories in both the Vuelta and the Giro to his name) and re-take the green jersey on his Specialized S-Works Tarmac SL7. It’s essentially the same bike that Julian Alaphilippe won stage 2 on, with wheels from Roval and a Shimano Dura-Ace Di2 groupset.

The Aussie sprinter held off Sam Bennett to reverse yesterday’s result and take his second stage victory of this year’s race on a Ridley Noah Fast.

Sunweb’s Marc Hirschi, making his Tour de France debut, won the stage from Chauvigny to Sarran Correze on a Cervelo S5. This is the brand’s flagship aero race bike, available only with disc brakes.

The aero-shaped down tube sits very close to the front wheel and the skinny seat tube follows the shape of the rear wheel.

One of the key features is a V-shaped stem that’s integrated into a new full-length external fork.  The idea of the stem is that it reduces drag by allowing unimpeded airflow along the top tube.

Read our review of the Cervelo S5