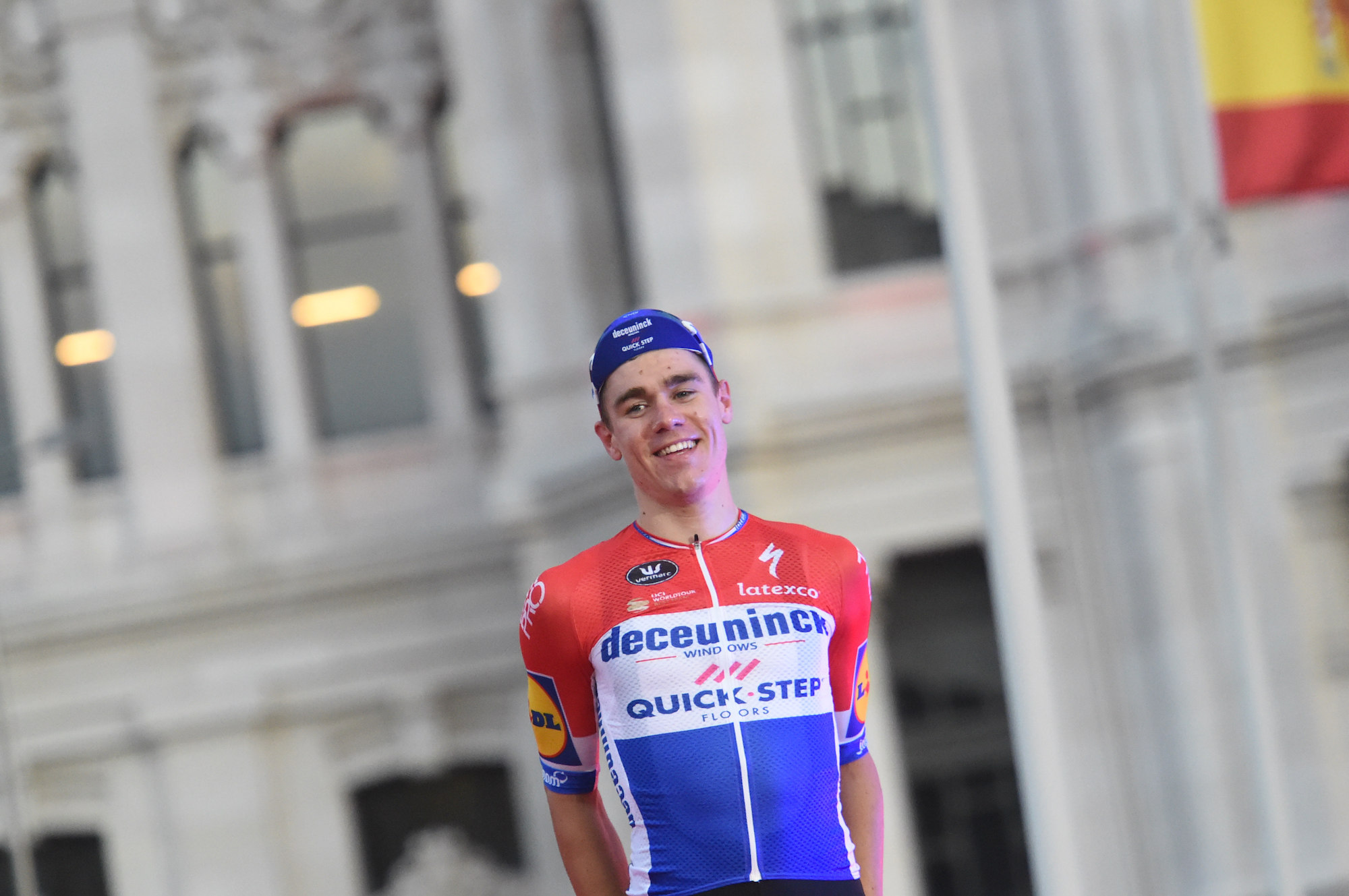 Fabio Jakobsen appears to be in very serious, but stable condition in a Polish hospital, where he underwent surgery Wednesday. The Dutch national champion crashed just metres from the finish line of Tour of Poland’s opening stage.

The Union Cycliste Internationale (UCI) responded to the crash, stating it is requesting sanctions against Dylan Groenewegen. While the incident is under investigation, a race jury disqualified Groenewegen. Race video appears to show the Jumbo-Visma rider pushing Jakobsen into the barriers.

Riders have also responded to the crash, showing support for Jakobsen. Several have also commented that a dangerous course should share in the blame for this horrific incident.

The UCI quickly responded to the Tour of Poland crash, and appears to be placing the blame on Groenewegen. In a statement issued just hours after the incident, the UCI said it “strongly condemns the dangerous behaviour” of Groenewegen. Cycling’s governing body has referred the matter to its Disciplinary Commission, saying it will “request the imposition of sanctions commensurate with the seriousness of the facts.”

Groenewegen’s team, Jumbo-Visma responded to the incident on Twitter apologizing for the behaviour of its sprinter. “Crashes like these should not happen,” says the team, which has initiated its own internal discussion of what it will do next.

Our thoughts go out to Fabio Jakobsen and other people involved in today’s terrible crash in the Tour of Poland. Crashes like these should not happen.

We offer our sincere apologies and we will discuss internally what has happened before we may make any further statement. #TDP20

While the UCI is pursuing action against the rider who appears to have caused the terrible crash, others are saying Groenewegen is not the only party who should share in the blame.

Crashes are common in sprint finishes. While Groenewegen’s actions are clearly unacceptable, several factors have amplified the consequences and seriousness of Wednesday’s events. Some observers, including several pro riders, are calling attention to role such a dangerous finish has played in the severity of Jakobsen’s injuries.

Simon Geschke, who races with CCC Pro Team, posted on Twitter that the Tour of Poland’s finish line has raised concerns in the past. A downhill slope means riders can hit speeds approaching, or exceeding speeds of 80 kph in the finishing sprint. Fabio Sabatini echoed Geshke’s concerns, calling the finish “suicide.”

Every year the same silly downhill sprint in the @Tour_de_Pologne.
Every year i ask myself why the organisation thinks it‘s a good idea. Bunch sprints are dangerous enough, you don’t need a downhill finish with 80kph!@cpacycling

Speed isn’t the only factor that might have contributed to making Jakobsen’s condition so serious, though.

Video of the crash shows several of the barriers lining the run-in to the finish dislodging quite easily. Some barriers then catapult back onto the course.

Video from another angle shows a line of rail tracks and scattered concrete blocks running parallel to the course, just feet on the other side of the barrier.

anyone else weirded out by how the barriers moved in that Tour of Poland crash? seems like maybe they weren’t properly connected. you shouldnt be able to fall through them immediately and then pop a bunch more out like that #tdp20

Outpouring of support as Jakobsen fights for his life

Medical staff quickly attended to Jakobsen, eventually moving him to a nearby hospital in Katowice where he underwent surgery. The Assistant Director of the hospital updated Polish TV, saying Jakobsen does not appear to have brain or spinal cord damage, through a full diagnosis is expected Thursday.

Duceuninck – Quick-Step have issued a statement confirming Jakobsen’s condition, adding that he remains in a medically induced coma.

Earlier in the day, Dr. Barbara Jerschina, the Tour of Poland race doctor, spoke to media about her team’s effort to assist Jakobsen on the scene.

“We did everything that could be done. The working conditions were very hard, it is a very serious craniocerebral trauma, a broken palate, so it was difficult to intubate, but the laryngeal tubes and oxygen were connected all the time. We maintained the level of saturation and life activities. The heart was working well, it was maintaining the right pressure.”

Asked about his prospects fro recovery, the doctor added, with obvious signs of emotion, told Naszosie.pl

“This rider is very seriously injured and is life threatening. The palate and the upper respiratory tract were crushed, but he managed to intubate, he went to the hospital, but lost a lot of blood. After all, he is alive, he is with us and let’s hope we win.”

In better news, the race official involved in the crash appears to be in less seriously injured than initially reported. When Jakobsen went flying through the barriers he collided with the official.

Groupama-FDJ rider Marc Sarreau was also hospitalized after being involved in the crash. The team issued a statement saying he has multiple torn ligaments and serious trauma to his shoulder but is otherwise ok. Several other riders were injured in the crash, but did not require hospitalization.

The UCI’s full statement concerning Groenewegen can be read below.

“The Union Cycliste Internationale (UCI) strongly condemns the dangerous behaviour of rider Dylan Groenewegen (Jumbo-Wisma), who sent Fabio Jakobsen (Deceuninck-Quickstep) into the barriers a few metres from the finish, causing a collective crash at the end of the first stage of the Tour of Poland.

Groenewegen was disqualified from the race by the commissaires’ panel.

The UCI, which considers the behaviour unacceptable, immediately referred the matter to the Disciplinary Commission to request the imposition of sanctions commensurate with the seriousness of the facts.

Our Federation is wholeheartedly with the affected riders.”