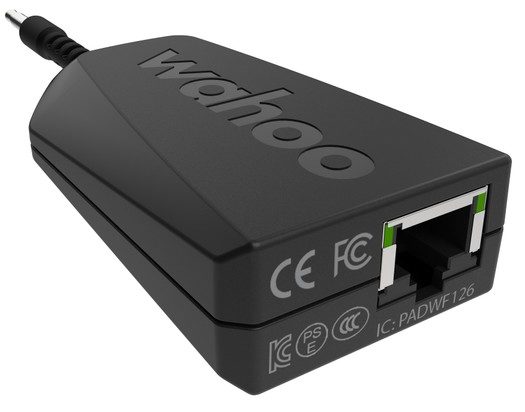 When Wahoo released the latest generation of the Kickr in Aug. 2020 buyers quickly noticed a new port integrated into the side of the machine.

RELATED: The new Wahoo Kickr addresses all your trainer grievances

The port, located just above the power cable, is designed to accommodate the Wahoo Kickr Direct Connect: A dongle that allows you to hard wire your trainer to a home network.

But why would you need to connect a trainer with a cable when you can transmit wirelessly? For many cyclists, ANT+ or Bluetooth Smart dropouts are a frequent issue. Interference from specific wifi channels, high radiofrequency environments  or other electronics (even microwaves!) can cause dropouts at the least opportune moments of a ride or race.

The Direct Connect allows Kickr users to plug the trainer into a router or computer via ethernet cable. For most training programs, the data transmitted from the Kickr will then pop up as it normally does on the list of connections.

The Direct Connect and esports

For serious competitors, stable connections are a must. Even a five second ANT+ dropout could cost a cyclist an important race, so Wahoo’s Direct Connect will be very appealing.

During the pandemic, Zwift racing has been completely remote, but that won’t be the case as things return to some level of normalcy. Large-scale esports events in the past have had major issues with high radiofrequency levels, resulting in frequent dropouts, so the Kickr with hard wired connections will be an obvious choice for organizers.

There is one issue with software—Zwift still hasn’t launched Direct Connect integration, but the company says it’s currently working on it.

This isn’t the first time Wahoo has built trainers with a plan to accommodate future software platform developments. The Kickr Bike was designed with steering technology that Zwift only recently announced it had integrated into its program.

It seems that the hard wired feature was added after the release of the trainer itself simply because of timing issues, so we can likely expect future generations of the Kickr and possibly other Wahoo trainers to include an integrated ethernet port.

Not all cyclists will need a hard wired connection, but those who live in apartments surrounded by dozens of routers and cyclists who are serious about esports will be thankful for the new design.

For the first esports world championships this year cyclists competed virtually from home on the Tacx Neo 2T. In contrast, if next year’s race is held in a single venue it would not be surprising to see the athletes racing on Wahoo Kickrs with Direct Connect adaptors or a new 2021 trainer with similar capabilities.