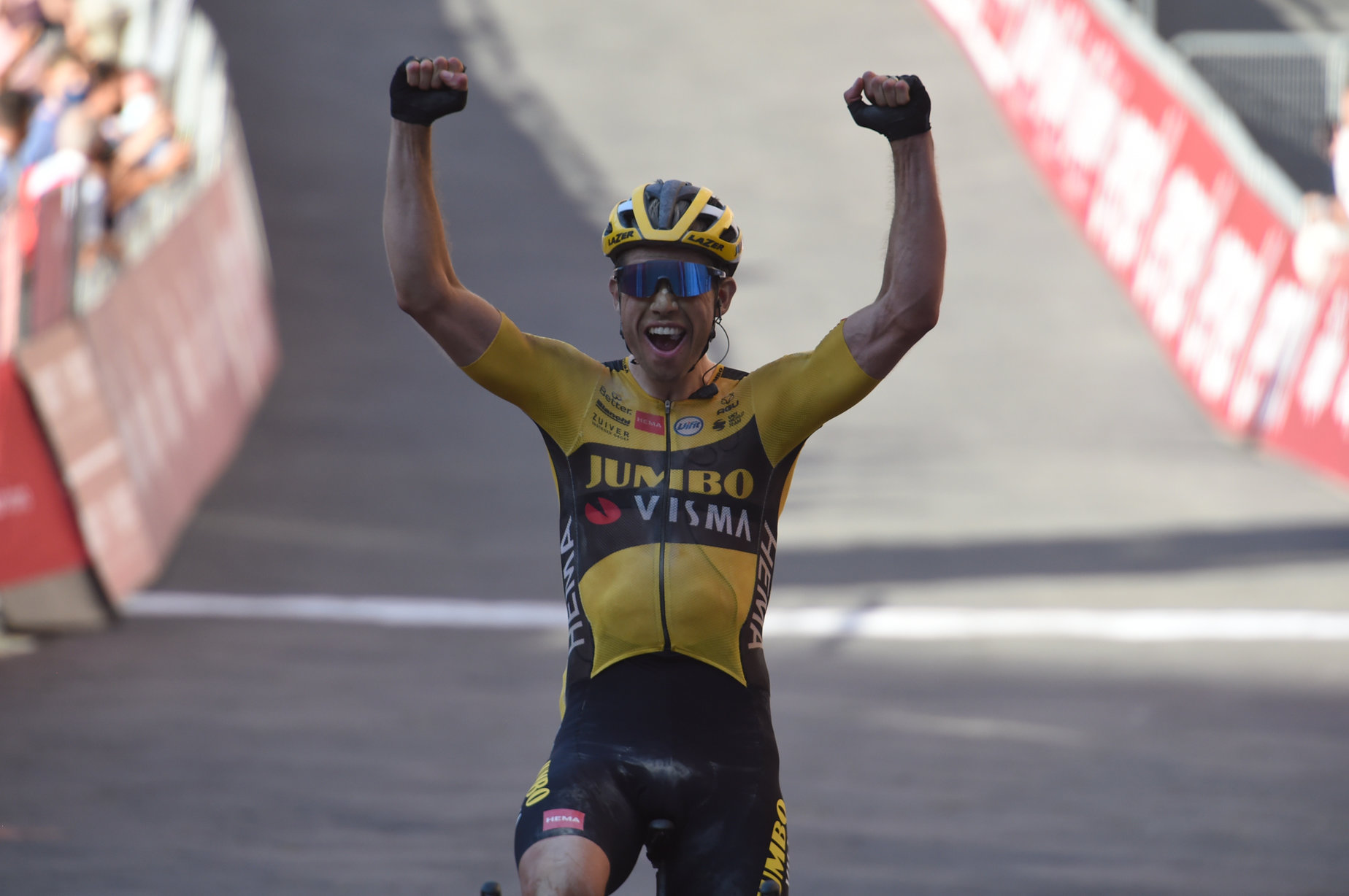 The biggest road victory of Wout Van Aert’s career came Saturday at Strade Bianche, a compelling, high-summer race in Tuscany to restart a WorldTour that ceased in March. Van Aert had been third in the last two editions, most memorably in 2018 when he cramped on the final climb. He came back from a long injury recovery to win a round of the cyclocross DVV Trofee in February.

One year later a bad injury, @WoutvanAert is back to the top. pic.twitter.com/XDX1GOgU0M

The WorldTour men were up against 184 km of which 63 km wereS 11 sectors of sterrato roads. Dust, heat and the racing cobwebs of a long interruption in the season would be the other big obstacles besides the white gravel.

⚠️ The first World Tour race of the season and it’s a big one, where the riders will take on the rolling dusty roads of Tuscany.

A sextet of wildcard fugitives rolled over the first few sectors and then one broke solo before Sector 4. With 100 km to go, and the other breakaways caught, the lone rider had a 3:35 advantage.

With 72-km remaining Julian Alaphilippe, Mathieu van der Poel and Daniel Oss put in an acceleration that brought the last escapee close. A move containing Bob Jungels doomed the lone holdout. With Astana and Ineos pulling in the peloton, Jungels stopped, van der Poel and Alaphilippe punctured and Vincenzo Nibali was involved in the fall.

The ramp on sector 7 was a beast. Step forward @WoutvanAert with a MASSIVE effort!

A push from Jakob Fuglsang on the long Monte Sanre Marie sector unhitched van der Poel and Alaphilippe. A Fuglsang-Van Aert-Greg Van Avermaet nontet pushed on into the gravel. With 50-km still to go Fuglsang skipped away solo.

Fuglsang thought better of it and soon made up a grungy-looking sextet containing Van Aert, Van Avermaet and Paris-Nice champion Max Schachmann. With Zdenek Stybar leading a chase trio behind, the leaders stayed intact on the third to last sector.

Van Aert and Schachmann dashed off before the 2.4 km, penultimate sector of gravel. Attacks there dislodged Van Avermaet. Two obstacles remained: 1.1 km of white gravel and the climb to the finish line. Van Aert tore away on the dirt. First Fuglsang was dropped from the chasers then Bettiol.

Van Aert entered the city alone and won by over a half minute. Italian champion Davide Formolo, making his Strade Bianche, outclimbed Schachmann for the runner-up spot.

Hugo Houle was top Canadian in 29th. Houle and Woods were among the 42 finishers.

The WorldTour will see its first return stage race starting August 5 at the Tour of Poland with Italian Monuments Milan-San Remo August 8 and Il Lombardia August 15.